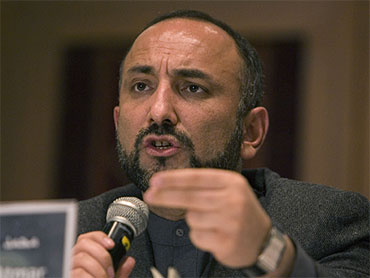 The Afghan government has been dogged by corruption for years and this is the third formal launch of a unit promising to rein in rampant graft and bribery. But Afghan government officials told reporters this attempt has a better chance because of a real desire to succeed and strong international backing. This one also comes amid threats from world leaders who are hedging their commitments of aid and troops on the ability of Afghan President Hamid Karzai to battle corruption.

U.S. Ambassador Karl W. Eikenberry both praised the plan and called for follow-through.

"It requires action. Words are cheap. Deeds are required," he told reporters and others gathered at the news conference held at a hotel in Kabul.

"We share a vision of Afghanistan where justice is available to all and the institutions of government and society serve the wider interests of the people, not the narrow interests of the powerful," Eikenberry said.

"Achieving this vision is essential for this country to become a strong and prosperous Islamic state, and it's not a vision that can be achieved by force alone," said Eikenberry, who has questioned the wisdom of adding U.S. forces when the Afghan political situation is unstable and uncertain.

Both American and British officials have said they will consider the Afghan government's commitment to reform in deciding how many more troops to send to fight the resurgent Taliban. Secretary of State Hillary Rodham Clinton said Sunday that the U.S. will not provide any civilian aid to Afghanistan without a way to for how funds are used.

British Ambassador Mark Sedwill said corruption has created a "crisis of confidence" about the government among the Afghan people. He stressed the fight against corruption was not an issue between Afghanistan and the international community, but between the Afghan government and the people.

Afghan officials emphasized the task force was not imposed on the government by the international community - the Karzai government set it up months ago with the help of the U.S. Federal Bureau of Investigation, Britain's Serious Organized Crime Agency and Interpol.

"Corruption is the cancer that is destroying the lives of the people," said Justice Minister Mohammad Sarwar Danish.

Interior Minister Hanif Atmar acknowledged accusations of bribery among police, but said there also were many Afghan police officers who daily risk their lives to enforce order.

"For the next five years, the priority of Karzai is to fight corruption," he said.

The rhetoric, however, was reminiscent of previous efforts, and the new unit came only after Karzai bristled at earlier attempts by the United Nations to set forth a series of goals to banish corruption. American and British officials have been particularly vocal in recent weeks in calling for Karzai to institute reforms following the messy election that took two and half months to resolve and undermined the legitimacy of a government the West is supporting with billions of dollars and tens of thousands of troops.

The European Union, a major aid donor to Afghanistan, seeks a new arrangement with Karzai's administration to ensure good governance and an end to corruption, EU spokeswoman Cristina Gallach said.

"We need to hear from Karzai that he is putting together a government that faces the challenges that Afghanistan has before it," Gallach said in Brussels.

Transparency International, a non-governmental organization, last year ranked Afghanistan 176th out of 180 countries on its corruption perceptions index, a poll that assesses the degree to which corruption is perceived to exist among public officials and politicians. Only Haiti, Iraq, Myanmar and Somalia were worse.

A March report by the U.S. Agency for International Development found that corruption had reached "an unprecedented scope in the country's history."

Much of the development money from foreign donors is funneled through Afghan ministries in an attempt to strengthen the government, but donors regularly complain they lose control of funds once they go into a ministry and often have no way or right to track their use.

The country's first anti-corruption body was disbanded after it emerged its head had been previously convicted and imprisoned on drug charges in the United States. A new anti-corruption office was launched last summer with a media blitz, promises of high-level trials and the firing of dozens of judges. More than a year later, Afghans continue to list government corruption as one of their biggest problems, and officials said the judicial graft the 2008 commission targeted remains one of the key problems the new body will have to tackle.