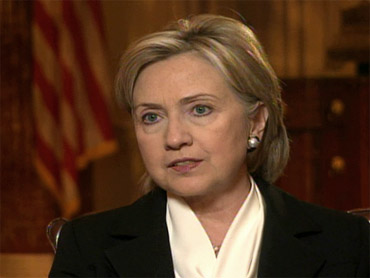 The United States is limiting its goals in Afghanistan and demanding better accountability from that country's underperforming leader, Secretary of State Hillary Rodham Clinton said Sunday, and she tied additional U.S. civilian help to results from Kabul.

Clinton, an influential voice in deliberations about whether to add large numbers of U.S. troops to an unpopular eight-year war, said Afghan President Hamid Karzai can do more to reduce corruption and go after those who may have looted U.S. aid in the past.

"I have made it clear that we're not going to be providing any civilian aid to Afghanistan unless we have a certification that if it goes into the Afghan government in any form, that we're going to have ministries that we can hold accountable," Clinton said.

The Obama administration wants a tribunal to prosecute major corruption crimes and a new anti-corruption commission, she said in an interview on ABC television.

"There does have to be actions by the government of Afghanistan against those who have taken advantage of the money that has poured into Afghanistan in the last eight years so that we can better track it and we can have actions taken that demonstrate there's no impunity for those who are corrupt," she said.

President Barack Obama is weighing ways to link the coming troops and money decision to better government performance in Afghanistan, but U.S. leverage is limited by the shifting objectives in Afghanistan since the 2001 invasion and the history of sloppy accountability on both sides.

"We're going to expect more from the Afghan government going forward and we've got some very specific asks that we will be making," Clinton said in another interview on NBC television. Both interviews were done from Asia, where Clinton is traveling with Obama.

Clinton did not spell out exactly what those "asks," or demands, would be, beyond the tribunal and commission she mentioned on ABC. Congress has already required the administration to measure the performance of the Afghan government on several fronts, and the coming announcement is expected to expand on that effort and include more specific goals for the training and performance of Afghan armed forces.

Obama is expected to announce some troop increases along with clearer limitations on U.S. goals for the war after he returns from Asia late this week. The announcement is expected either just before or just after the Thanksgiving holiday on Nov. 26. The post-holiday timing appears more likely, despite continued criticism from the political right that Obama is taking too long to announce his next move.

The time is past, Clinton said, when U.S. officials would "talk about how we were going to help the Afghans build a modern democracy and build a more functioning state and do all these wonderful things."

She added, "That could happen, but our primary focus is on the security of the United States of America — how do we protect and defend against future attacks."

Presidential adviser David Axelrod made a similar point Sunday. "We have to keep focused on what our purpose was in the first place," he said on CNN. "Our purpose was to disrupt and dismantle and destroy al Qaeda. That remains our purpose, but obviously we cannot make an open-ended commitment."

Axelrod dismissed Republicans' criticism that as a political adviser he should not have sat in secret meetings of the president's war council over the past several weeks. Axelrod said he did not speak during those sessions and was there to better understand the emerging strategy so he can reflect it accurately to the press and others.

Obama's top war commander, Gen. Stanley McChrystal, has laid out military options for employing between about 10,000 and 40,000 additional U.S. troops next year, and prefers the high end, military officials have said. Obama rejected four troop options presented at a war council session Wednesday, and Defense Secretary Robert Gates said Thursday that the focus is now on choosing the best elements from those plans.

Military officials have said the most likely outcome is a middle path that would add some 20,000 to 35,000 troops.

Gates also said that cost estimates had been prepared for each option. He gave no details, but on Sunday Democrat Sen. Kent Conrad appeared to refer to those calculations.

"Security is not cheap and the first judgment has to be, what assures the security of the nation?" Conrad said in expressing Democratic doubts about a troop build up on CNN. "But in the case of Afghanistan, the cost is $40 billion to $50 billion a year if we're going to put in an additional 35,000 to 40,000 troops."

Obama will get more support from Republicans than Democrats for any troop increase.

Republican leader Sen. Mitch McConnell said Sunday that support is likely to hold even if Obama approves slightly fewer forces than McChrystal wants, but he said Republicans are "perplexed about the length of time it's taking to make this decision."

"I think the president, as difficult as this decision is, needs to make it, needs to follow the advice of his generals," McConnell said on Fox television. "And if he does, he'll have overwhelming support among Republican senators."