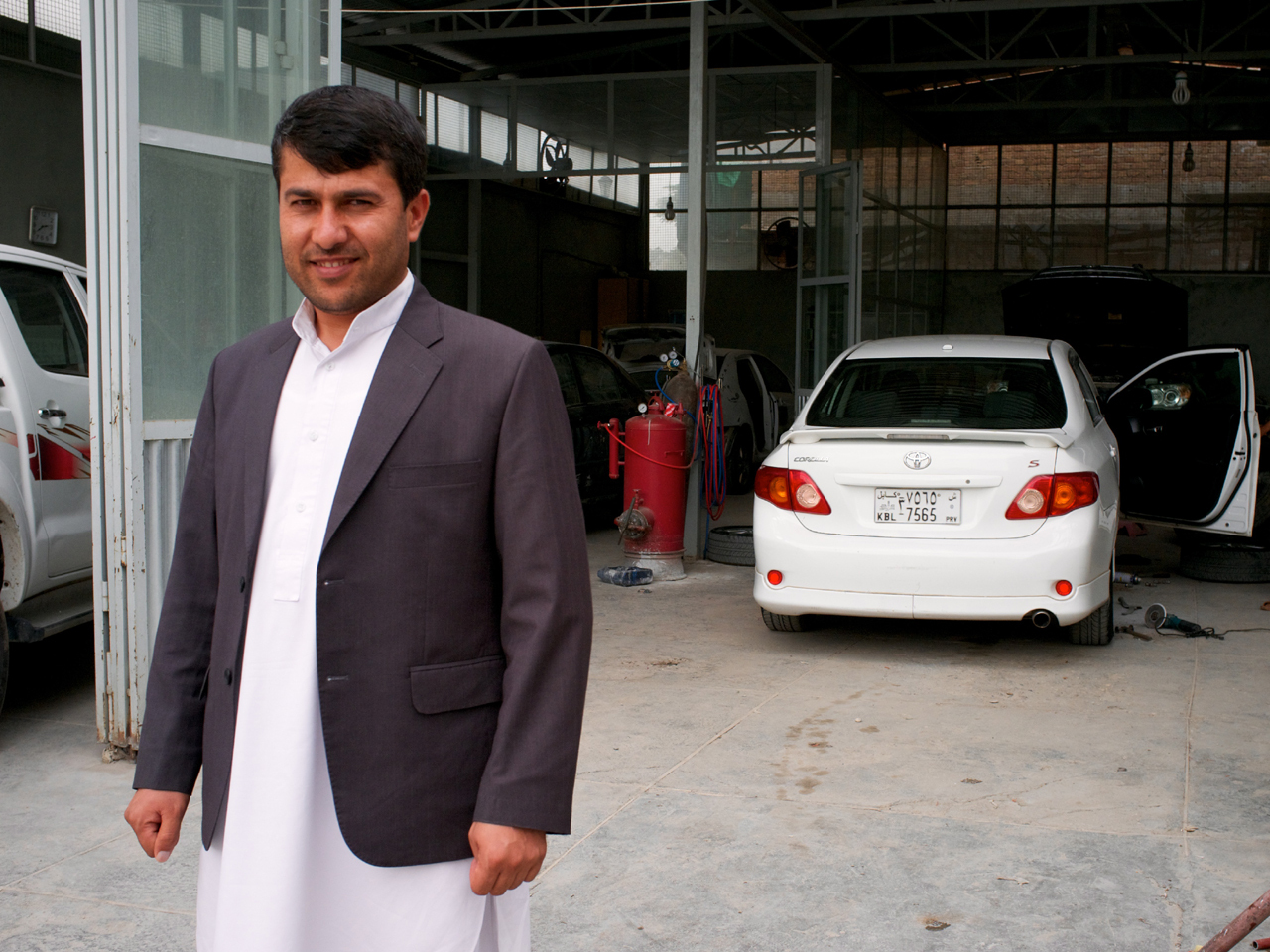 (CBS News) KABUL - By the end of 2014, the international military forces who have tried to secure Afghanistan for more than a decade will leave the country, and as they go, so too will many of the business opportunities granted by their presence.

"The current economy is artificial," Muqim Jamshady tells CBS News in his suburban Kabul home. Jamshady started his own company, Afghan Logistics, shortly after the Taliban regime was ousted almost 11 years ago.

The current economy "has no foundation," he says. "Much depends on the coalition forces. If they leave, the economy will collapse dramatically."

Much of Jamshady's business depends on an international presence in Kabul. He runs a hugely successful logistics, rental car and taxi firm - services which are mostly aimed at the massive population of foreigners in the Afghan capital.

He built his business from almost nothing, starting as an owner-driver and then spending his savings on a second vehicle, which his brother drove. Soon, there was a third brother driving a third car. Today he has more than 100 vehicles, a large complex of offices and his own maintenance facility.

His wealth is apparent, but Jamshady is reluctant to disclose his real net-worth. Success here comes with great risk. As a wealthy businessman he is a target for kidnappers - anyone who captures him could demand a hefty ransom.

"I can't go anywhere without a bodyguard," he tells CBS News. "I live like a bird in a golden cage. It doesn't matter how much money you earn if you can't enjoy life. I'd like to be able to walk the streets with my children without worrying about being kidnapped."

Security concerns overshadow his ambitions and investment plans for the future.

"Since the collapse of the Taliban regime, the situation in Afghanistan hasn't improved," he declares. As the foreign military operations slowly wind down, "day by day it's becoming more insecure. Afghan businessmen are concerned about future investments. All of us, including myself, are planning to invest outside of the country. If Afghanistan isn't going to be safe, we have to invest elsewhere, just in case."

Jamshady's uncertainty is echoed by Zolaykha Sherzad, who runs Afghan fashion label Zarif Design. More than half of her workforce is female, and with the days of the Taliban's persecution of women still fresh in her mind, she worries about their future.

"What makes me so unsure is to see how uncertain we are, even with the international community still here," she says. "What happens after they're gone? Do we have to go back to a time when women can't work, or go out unaccompanied? I don't know which direction we're going in."

Sherzad returned from Switzerland in 2005 to start her business in Kabul, the city of her birth. She created a high-end clothing line loosely based on Afghan tradition, but with modern flair and cut in silk, in honor of her country's location on the famous Silk Road trade route.

She would like to sell more to Afghanistan's middle class, but 80 percent of her customers are foreign. She believes that her business would be more profitable if well-off Afghan families returned to the country, but she knows that will only happen if the country is stable.

"The situation is not as peaceful as it was a couple of years ago. It has had an impact on businesses. The insurgents want to destabilize," Sherzad laments. "Once you don't have security or peace, it becomes a kind of state of emergency, people just live day-to-day and don't invest. My business is now sustainable, but there is a danger that it might not be."

Sherzad says she wants to stay in her home country.

So does Jamshady. But while maintaining his Kabul-based business, he has stopped trying to expand it and is instead building up a company in Dubai. He has even purchased a family home there, as a back-up plan.

Driving out of central Kabul, where Jamshady's company has its headquarters, and heading toward the suburbs where he lives, there is a more visible sense of normality. This is where you find the regular residents of Kabul. Most have moved away from the central areas which were swiftly occupied by diplomats and foreign companies when the Taliban government fell. With the foreigners came high rents, blast walls, armed guards, barbed wire and an oddly muted atmosphere.

Once into the outlying parts of the city, Kabul suddenly seems to come alive again.

Here, there are no embassies, no foreign troops, no international contractors or aid workers. Instead, almost surprisingly, there is a series of brand new, glitzy glass-paned wedding halls lit up in neon lights more reminiscent of Las Vegas than the dusty, mud-colored buildings Westerners are accustomed to seeing.

The roads here are busy with cars crammed full of large families out visiting relatives - children perched on laps, toddlers dressed up in their finest clothes pressed against the windows. Roads are dotted with shiny, newly-built gas stations, shops are alive with customers and colorful goods, men line up for fresh bread.

Along poorer, lumpy dirt roads off the main highway, children sort through the trash for empty bottles and goats wander among the debris. This is normal in this part of Afghanistan. Here, you could almost forget the war still raging elsewhere in the country, just for a moment.

But the people on these roads are the ordinary people, who will have to stay in the country whatever happens.

Jamshady worries about those he may have to leave behind if it comes to the worst - the people who can't afford to get out.

"I just hope Afghanistan will be safe," he says. "I have lots of energy for my country and I don't want to leave, but the situation might force me to go. Afghanistan's future is dark."

This story was filed by CBS News reporter Kitty Logan in Kabul.