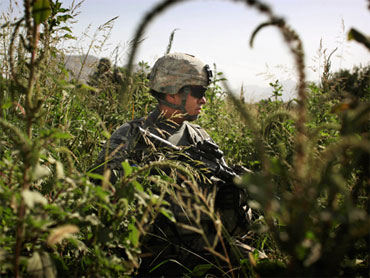 Militant attacks in once-calm northern Afghanistan killed at least 11 police officers and a government official whose car was hit by a remote-controlled bomb, officials said Sunday.

In the south, NATO said a U.S. service member died Sunday following an insurgent attack and a combined coalition and Afghan patrol killed a senior Taliban commander and a dozen other insurgents who were discovered planting a homemade bomb on a road.

Insurgents as well as coalition forces have escalated attacks across the country in recent months, as the NATO-led force pours in 30,000 more U.S. troops in a new push to break the Taliban's hold in their strongholds and establish stable Afghan governance.

International and Afghan commandos have been conducting near-nightly raids to capture or kill insurgents, while the Taliban have launched attacks on army bases and local officials and planted thousands of roadside bombs.

NATO said one U.S. service member died as a result of small-arms fire, another was killed by a roadside bombing, and a third died during an insurgent attack in separate incidents in eastern Afghanistan.

Some reports said the guards were poisoned before the attack to make it easier for the insurgents, said Mahbobullah Sayedi, a spokesman for the provincial government. He said three border police stationed at the checkpoint were missing.

"It is possible that the militants used one of the border police, someone who was working there," Sayedi said. "We don't know anything about the three others, where they are. So that is why we are sending a delegation to find out exactly what happened."

Aqtash left Sunday morning to go to the site of the attack, but was forced to turn back when another gun battle on the road to the border made it unsafe to travel, he said by telephone.

Northern Afghanistan was once relatively calm, but Taliban and other militants have become increasingly active in the past two years.

On Saturday in Kunduz, militants killed the chief of Qala Zal district and his body guard by remotely detonating a bomb as he passed in his car, the Ministry of Interior said.

Five other police died Saturday when their vehicle hit a roadside bomb in northeastern Badakshan province, which is next to Kunduz, the ministry said in a statement.

Earlier this month, Taliban suicide attackers stormed a four-story house used by an American aid organization in Kunduz city in north Afghanistan, killing four people before dying in a fierce, five-hour gun battle with Afghan security forces. The pre-dawn attack appeared part of a militant campaign against international development organizations at a time when the U.S. and its allies are trying to accelerate civilian aid efforts to turn back the Taliban.

In southern Afghanistan, a joint Afghan-international force killed a Taliban commander, Malauwi Shahbuddin, along with several armed insurgents Saturday in the Shahjoy district of Zabul province. A provincial spokesman, Mohammad Jan Rasoolyar, said 13 Taliban were killed in the attack.

NATO said the commander had been moving roadside bomb-making material and foreign fighters into the area from Pakistan. After one of the insurgents detonated a grenade near the security force, the troops opened fire, killing the commander and other insurgents. One insurgent attempted to booby trap himself by placing a hand grenade under his body, but it was safely removed, NATO said.

In Ghazai province, also in the south, an Afghan and international force killed several insurgents and detained others on Saturday while pursing a Taliban commander with ties to the Taliban in Pakistan and al Qaeda. NATO said they were part of a group known for conducting assassinations against civilians and operations with the al Qaeda-linked Haqqani network.

Insurgents also have been targeting police and other officials to undermine the Afghan government and sow fear. Establishing security and trust in local authorities is a key to the NATO counterinsurgency strategy to defeat the Taliban and eventually allow international troops to withdraw.

Ministry of Interior spokesman Zemeri Bashary said Sunday that 23 Afghan policemen have been killed and 69 others wounded in attacks across the country in the past week.