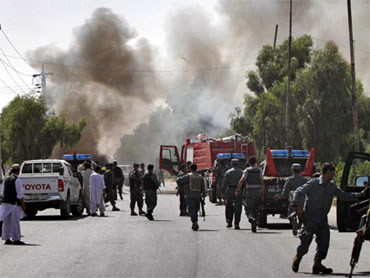 Five U.S. troops and at least a dozen civilians were killed in attacks today in Afghanistan's volatile east and south.

NATO said one U.S. service member died as a result of small-arms fire, another was killed by a roadside bombing, and a third died during an insurgent attack in separate incidents in eastern Afghanistan.

Also, officials said unknown gunmen killed 11 Pakistani Shia tribesmen in the east and at least one person died when a bomb planted on a motorbike exploded in Kandahar city in the south.

Explosions also hit two convoys of international troops in different parts of the country, with Germany saying two of its troops were wounded by a roadside bomb in the northern province of Kunduz. Another explosion targeted NATO troops in Khost in the east, but the alliance said there were no casualties.

Afghan and international forces also said a combined commando unit killed a Taliban operative and captured eight others in an overnight raid in Paktia province in the east, though local villagers claimed the men were innocent civilians. In the northern city of Mazar-i-Sharif, thousands of Afghan's staged an anti-U.S. protest over another night raid that killed two security guards.

Insurgent attacks have intensified across the country and the international coalition has been stepping up raids to root out militant leaders as 30,000 more American troops arrive to try to turn around the war and build a stable Afghan government nine years after U.S.-backed forces toppled the Taliban's hard-line Islamist regime.

Last month was the deadliest of the war for the multinational force, with 103 international troops killed, 60 of them Americans.

A remotely detonated motorcycle bomb killed one person Saturday in Kandahar city, the spiritual birthplace of the Taliban, authorities said.

The blast set cars ablaze and shattered windows at a popular shopping center. One man was killed as he drove by in a car just as the bomb exploded, the provincial government said in a statement. 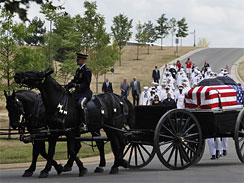 (AP Photo/Manuel Balce Ceneta)
The province is the site of a U.S.-led military operation to strengthen government control.

(Left: A caisson carries the coffin of Navy Seaman William F. Ortega at Arlington National Cemetery in Arlington, Va., Friday. The 23-year-old Ortega, of Miami, was a hospital corpsman assigned to Third Battalion, First Marine Regiment in Helmand Province when he died June 18 of wounds sustained from an improvised explosive device blast while conducting combat operations against enemy forces.)

In the eastern border province of Paktia, unidentified gunmen killed 11 Pakistanis who had crossed into Afghanistan to buy supplies, according to Rohullah Samon, spokesman for the provincial governor.

Samon said 11 Shia minority Muslim tribesmen died and three people, including a child, were wounded in the ambush of their minibus in Chamkani district.

The Ministry of Defense said the elite force killed an insurgent operative and captured eight others with weapons. The ninth person arrested was determined to be a civilian and turned over to local authorities, it said in a statement.

Paktia spokesman Samon complained that local authorities were not informed of the raid. He said villagers protested outside government offices Saturday, saying the dead man and those captured were innocent civilians. They promised a larger demonstration the next day if the eight prisoners were not released.

Combined coalition and Afghan forces have been stepping up night raids across the country trying to break up Taliban leadership and operations capability. 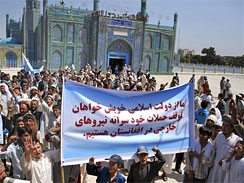 (AP Photo/Mustafa Najafizada)
In the northern city of Mazar-i-Sharif, more than 1,000 people protested Saturday against the deaths of two security guards in another night raid near a market.

The crowd chanted "Death to America! Long live Islam!" Protesters said the security guards were unjustly killed when combined Afghan and international forces landed by helicopter at the bazaar before dawn Wednesday.

NATO spokesman Col. Wayne Shanks said the two guards were shot when they raised their weapons at the commandos and refused orders to put them down. He said the raid succeeding in capturing a Taliban operative who supplied bomb-making material.

The coalition says the new wave of raids has captured more than 100 senior- and midlevel Taliban figures since April and killed dozens more. But the success rate has not made much of a dent in insurgent attacks.