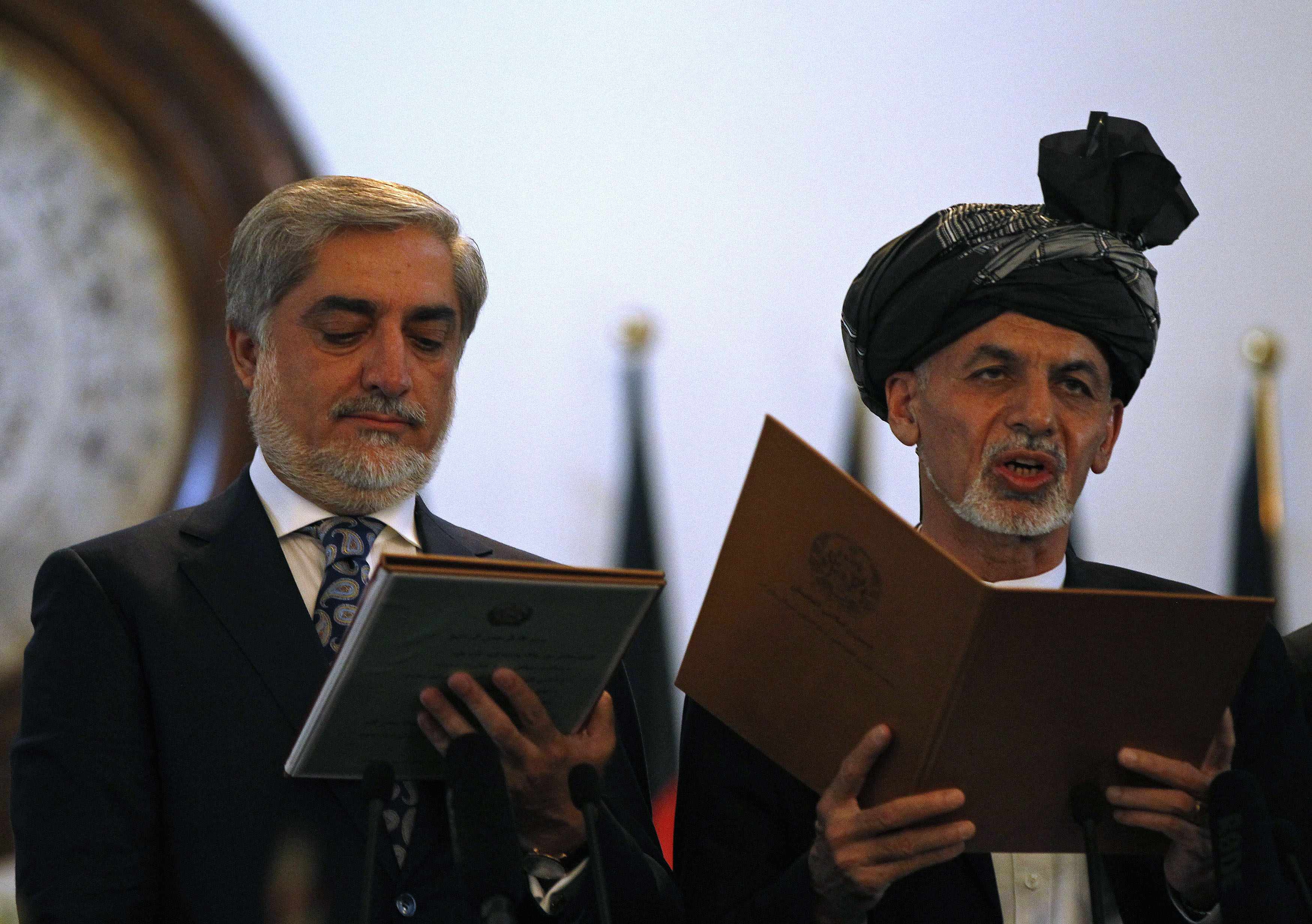 KABUL, Afghanistan -- Afghanistan swore in Ashraf Ghani Ahmadzai as its second elected president on Monday, embarking on a new era with a national unity government which quickly signed an agreement with the United States that would guarantee a continuing American military presence to help confront a resilient Taliban insurgency.

As Hamid Karzai left the political stage, the new president was locked into an uneasy partnership with his defeated rival, Abdullah Abdullah, who became the country's first chief executive. With a hug for the cameras, both sides appeared determined to reach across factions and avoid a descent into an abyss similar to what has happened in Iraq, where the government's failure to mend lingering sectarian divisions following a full U.S. withdrawal helped give rise to the brutal Islamic State of Iraq and Syria (ISIS) group.

The new Afghan government signed a security agreement Tuesday that provides a legal framework for the United States to keep about 9,800 troops in the country to train, advise and assist Afghan national security forces after the current international combat mission ends Dec. 31. That number of troops is expected to be cut in half by the end of 2015, and the U.S. would leave only about 1,000 in a security office after the end of 2016.

CBS News' Mukhtar Ahmad reports that James B. Cunningham, the U.S. Ambassador to Afghanistan, singed the agreement on behalf of the United States government and Hanif Atmar, the newly-appointed Afghan National Security Advisor, on behalf of the Afghan government.

Karzai, the outgoing president, had refused to approve the deal, which is intended to help Afghan security forces combat the Taliban.

The Afghan government also was expected to sign an agreement this week with NATO that would outline the parameters of 4,000 to 5,000 additional international troops -- mostly from Britain, Germany, Italy and Turkey -- to stay in Afghanistan in a noncombat role after the end of this year.

Without a post-2014 residual force, U.S. military officials said there was a risk that the Afghan security force would deteriorate, units would run out of fuel, pay systems would fail and there would be a reduction in the overall readiness of the Afghan police and army. They say al Qaeda is in "survival mode" in Afghanistan, but that if all international forces left this year, the terrorist network would see it as a victory, regroup and again use the region to plan and conduct operations against the West.

But there are serious questions about the ability of the Afghan security forces to take on the militants, even with a residual U.S. force -- down from a high of more than 130,000 U.S. and NATO troops in Afghanistan several years ago.

"Afghanistan doesn't have the full military necessary to defend the country," said Mohammad Doud Kalakani, a member of the Afghan parliament. "No air force, no tanks, limited artillery."

U.S. House Armed Services Committee Chairman Rep. Howard "Buck" McKeon, R-Calif., said Monday that he hoped President Barack Obama will view the signing of the security agreement as a "roadmap for a robust continued engagement, and not a path to premature withdrawal."

McKeon also wants the administration to rethink its plans to draw down U.S. forces. "We are witnessing now in Iraq what happens when the U.S. falters on that commitment and adopts a posture inconsistent with our security interests," McKeon said.

U.S.-Afghan relations will likely improve under Ghani Ahmadzai, a 65-year-old numbers-based technocrat who worked at the World Bank. Karzai, the country's only leader since the 2001 U.S.-led invasion, frequently criticized the U.S. government and irritated American leaders with his mercurial behavior; Karzai was criticized in turn for his inability or unwillingness to tackle corruption in his own government.

On Monday, however, Karzai wore a wide smile as he greeted his presidential guards upon entering the palace, where he presided over the first peaceful transfer of power in the nation's history. It was made possible by a constitution that he helped draft and that prohibited him from serving a third five-year term.

Ghani Ahmadzai's first act in office was to swear in Abdullah as chief executive, a role that U.S. Secretary of State John Kerry helped create to give voice to both Afghanistan's northern and southern flanks of power.

"Afghans have taken a moment of challenge and turned it into a moment of real opportunity," Kerry said Monday in a statement congratulating both men.

The deal settled months of political tensions that threatened to push the fragile country into civil war. But it remains to be seen how well the two Afghan leaders will work together, and whether the agreement will last. They still must agree on Cabinet appointments.

The nearly six-month-long election was marred by allegations of massive vote fraud, a staple of Afghanistan's last two presidential votes. Ghani Ahmadzai won a June runoff with 55 percent of votes cast, according to official results, though 1 million votes were thrown out. Abdullah's coalition continues to believe the election was stolen but accepted the chief executive compromise to avoid violence.

Bloodshed may be in Afghanistan's future anyway. Taliban militants this summer - for the first time since attacks truly picked up in 2005 - fought Afghan Army troops instead of the powerful U.S. and NATO military machine. The Afghan army saw its fatality rate skyrocket and the Taliban make gains.

Ghani Ahmadzai has said he would also welcome talks with the Taliban, who control vast rural sections of southern and eastern Afghanistan.

"We are tired of war," he said in his inauguration speech. "Our message is peace, (but) this doesn't mean we are weak."

Peace did not prevail on Monday, according to police reports. A suicide bomber detonated explosives at an intersection that leads to Kabul's airport, killing a half dozen people. A bigger attack took place in eastern Paktia province, where a car bomb and gunfire attack by militants sparked a battle that killed seven Taliban fighters, four police officers and two civilians.

The dual attacks served as a reminder that Taliban violence remains a part of daily life despite the deaths of more than 2,000 U.S. service members in Afghanistan since the 2001 invasion that toppled the Taliban regime for harboring al Qaeda militants responsible for 9/11.

"I hope Ashraf Ghani Ahmadzai can bring peace and the rule the law in Afghanistan as former Afghan President Hamid Karzai could not bring peace," said Abdul Rahman, a 30-year-old police officer. "Our people have been suffering from the instability and poverty."

The new president made pledges sure to please not only the international community but many Afghans as well. Ghani Ahmadzai said that women will play a prominent role in government and that corruption will be tackled. He introduced his wife to the country, a sharp contrast to Karzai's wife, who almost never appeared in public.

Ghani Ahmadzai wore a dark black turban popular in the country's south as he swore in his two vice presidents and then Abdullah and his deputies.

Abdullah, a former foreign minister, spoke first and thanked Karzai for his service and the people of the country for casting votes in the millions despite threats by Taliban militants.

"We are committed as one in the national unity government," Abdullah said. "Our commitment will be fulfilled together as a unified team to create national unity."

Ghani Ahmadzai then congratulated Karzai for a peaceful and democratic transition of power, and he thanked Abdullah for making the national unity government possible.

"We want to be held accountable. I am your leader but I am no better than you. If I make mistakes, you should hold me accountable," Ghani Ahmadzai said.

Though Kerry played a big role in reaching the deal, he did not attend the inauguration. Only one world leader was in attendance: Pakistani President Mamnoon Hussain.

Karzai, who has cautioned the successor government about its future dealings with the U.S., took a bold swipe at the U.S. during his farewell address last week. "They should take a careful path with America and the West," Karzai said.

The U.S. has invested $104 billion in Afghanistan since 2001 to train and equip the country's security forces, pave roads, upgrade hospitals, build schools and help modernize the nation, but the United States was omitted from a list of countries Karzai thanked in his speech. The U.S. ambassador to Afghanistan, James Cunningham, said Karzai's remarks were ungrateful and not representative of widespread Afghan public opinion.

In his statement, however, Kerry paid tribute to Karzai, who inherited a broken country when the Americans and their allies chose him more than a decade ago as a leader they hoped could cross ethnic lines, embrace former enemies and bring Afghans together.

"It's no secret that our relationship with President Karzai has been punctuated by disagreements," Kerry said. But "he is a nationalist, a patriot, and an important figure who stepped forward when his country needed him, and helped profoundly shape one of the most challenging periods in Afghan history that has seen remarkable progress."