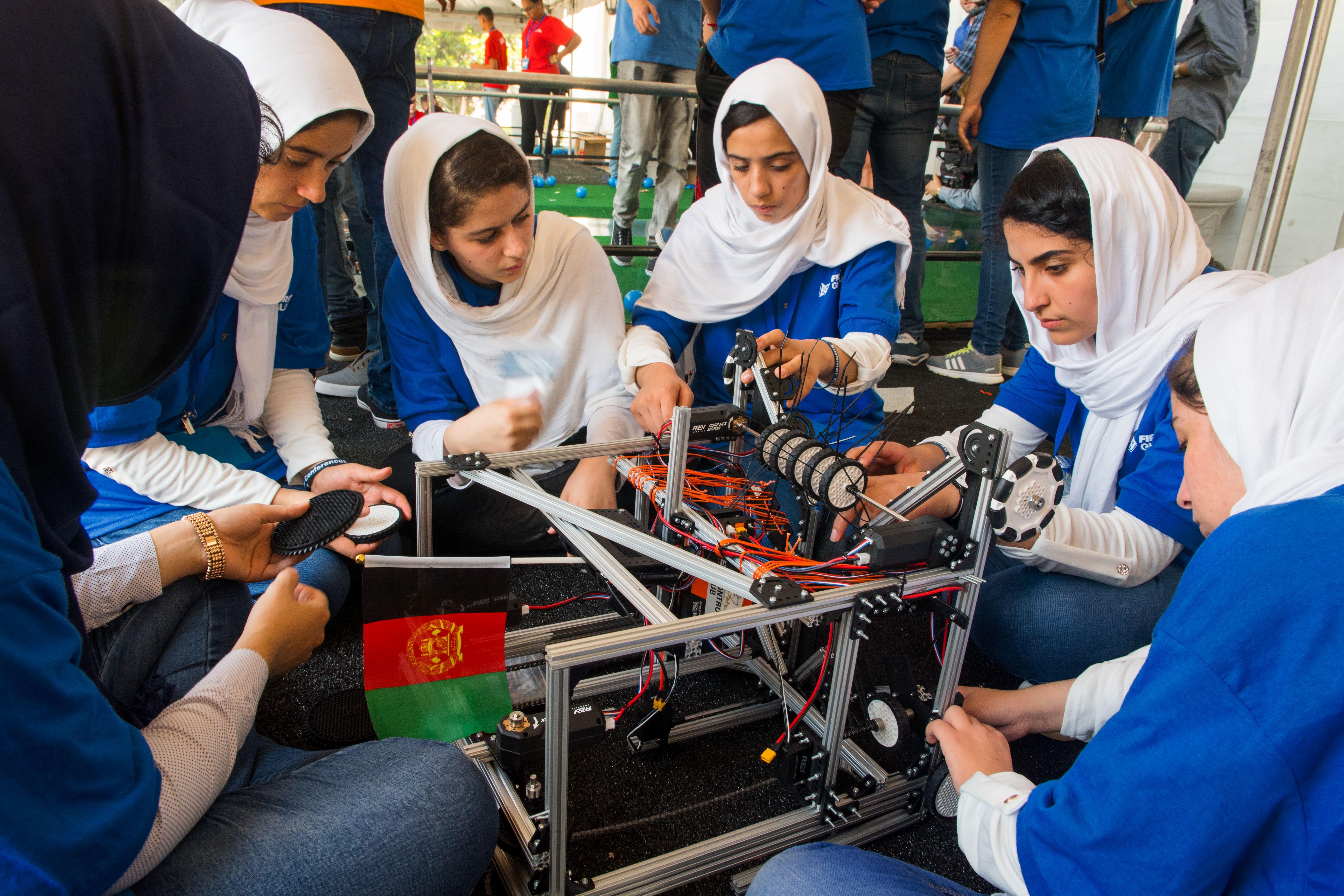 WASHINGTON -- Their team shirts didn't say "Afghanistan" and their name badges were handwritten, not typed, suggesting the last-minute nature of their entry into the United States. But the Afghan girls competing Monday in an international robotics competition in Washington were clearly excited to be representing their nation.

The team of six teenage girls was twice rejected for U.S. visas before President Trump intervened at the last minute. They arrived in Washington from their hometown of Herat, Afghanistan, early Saturday, and their ball-sorting robot competed in its first round Monday morning.

"Of course it's hard for Afghan girls because there is no high school or no college," 16-year-old Rodaba Noori of Afghanistan told CBS News correspondent Chip Reid.

To get to the U.S., they twice had to make the 500 mile journey from their home in Western Afghanistan through Taliban-controlled territory to Kabul to get visas. But concerns about terrorism delayed their package of robot parts, so they had only two weeks to build theirs -- other groups had much longer.

But in their first round Monday, they won, working with teams from Estonia and Gabon, Reid reports.

The girls' struggle to overcome war, hardship and U.S. bureaucracy on their journey to the U.S. capital has made their team stand out among more than 150 competing in the FIRST Global Challenge, a robotics competition designed to encourage youths to pursue careers in math and science.

"We want to be the young leader of robotic, technology and science in Afghanistan. We want to work with men to improve our country and make it a better place," Noori told Reid.

The U.S. won't say why the girls were rejected for visas, citing confidentiality rules. But Afghan Ambassador Hamdullah Mohib said that based on discussions with U.S. officials, it appears the girls, who are 14 to 16 years old, were turned away due to concerns they would not return to Afghanistan.

Speaking with the assistance of a translator who summarized their remarks, 14-year-old team member Fatemah Qaderyan told The Associated Press that she was "grateful" to be able to compete. Her teammate, 15-year-old Lida Azizi, said she was a little "nervous" but also excited to be playing and "proud."

Though there was a crush of media attention, the girls looked much like other competitors, wearing jeans along with white headscarfs. Their microwave-sized robot, like that of other teams, displayed their country's black, red and green flag.

"I'm so happy they can play," said their mentor Alireza Mehraban, a software engineer. He added: "They are so happy to be here."

While teams had up to four months to build their robots, the Afghan team built theirs in two weeks before it had to be shipped to reach the competition in time, Mehraban said. He said the girls had a day to test the robot in Afghanistan before it needed to be mailed.

On Monday, they were making adjustments and practicing in between rounds. When a chain seemed to come loose on a part of the robot that moves up and down, a competition judge recommended a larger part, and another team provided one.

Like others in the competition, the girls' robot can pick up and distinguish between blue and orange balls. To score points, teams deposit the blue balls, which represent water, and the orange balls, which represent pollutants, into different locations. The teams play in alliances of three nations, with two alliances competing head to head. The three-robot alliance that scores the most points in a game wins.

Mehraban, the team's mentor, said their robot managed to score one or two points in the first game. The team has two more games to play Monday and three games Tuesday.