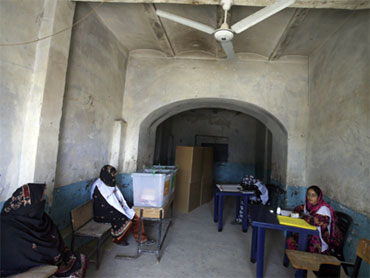 Taliban threats scared voters and dampened turnout in the militant south Thursday as Afghans voted for president for the second time ever. Insurgents killed 26 Afghans in scattered attacks, but officials said militants failed to disrupt the vote.

After ten hours of voting, including a last-minute, one-hour extension, election workers began to count the millions of ballots cast across the country. Initial results weren't expected until Saturday.

A top election official told The Associated Press he thinks 40 to 50 percent of the country's 15 million registered voters cast ballots. In the 2004 presidential election, turnout was 70 percent.

Low turnout in the south would harm President Hamid Karzai's re-election chances and boost the standing of his top challenger, former Foreign Minister Abdullah Abdullah. Turnout in the north appeared to be stronger, a good sign for Abdullah.

But Karzai is still widely seen as the favorite, despite deteriorating conditions in the country. As the Washington Post's Joshua Partlow points out, Karzai may be the .

The big question is whether Karzai can get 50 percent of the vote, reports CBS News correspondent Mandy Clark. If not, he will have to win a runoff against the second-highest vote-getter.

International officials have predicted an imperfect election - Afghanistan's second-ever direct presidential vote - but expressed hope that Afghans would accept it as legitimate, a key component of President Barack Obama's war strategy. Taliban militants, though, pledged to disrupt the vote and circulated threats that those who cast ballots will be punished.

A voting official in Kandahar, the south's largest city and the Taliban's spiritual birthplace, said voting appeared to be 40 percent lower than during the country's 2004 presidential election. The official asked not to be identified because he wasn't authorized to release turnout figures. Associated Press journalists reported low turnouts in Kabul compared with longer lines seen in the 2004 vote.

Militants carried out attacks around the country. Security companies in the capital reported at least five bomb attacks, and Kabul police exchanged fire for more than an hour with a group of armed men; two suicide bombers died in the clash, police said. Taliban spokesman Zabiullah Mujahid claimed that five gunmen were fighting with police.

The tight security across Kabul was relaxed after polls closed, as Afghan troops and police vacated checkpoints.

The Marines were encouraging villagers to go out and cast votes, reports Logan, but having limited success.

"How can I go to vote? The road is mined," one villager told CBS News.

Another told Logan they would skip the election due to the Taliban's threat to cut off fingers stained with indelible ink - the unmistakable mark of a participant in an election deemed un-Islamic by the fundamentalist group.

Karzai, (seen voting below), dressed in his traditional purple-and-green-striped robe, voted at a Kabul high school in the morning. He dipped his index finger in indelible ink - a fraud prevention measure - and held it up for the cameras. Presidential palace officials released a rare photo of Karzai's wife casting her vote.

"I request that the Afghan people come out and vote, so through their ballot Afghanistan will be more secure, more peaceful," Karzai said. "Vote. No violence."

(AP Photo/Rafiq Maqbool)
The next president will lead a nation plagued by armed insurgency, drugs, corruption and a feeble government. Violence has risen sharply in Afghanistan in the last three years, and the U.S. now has more than 60,000 forces in the country close to eight years after the U.S. invasion following the Sept. 11, 2001, attacks. A U.S. service member was killed in a mortar attack in the east Thursday, bringing to at least 33 the number of U.S. troops killed this month.

Karzai, a favorite of the Bush administration, won in 2004 with 55.4 percent of the vote, riding into office on a wave of public optimism. As the U.S. shifted resources to the war in Iraq, Afghanistan fell into steep decline, marked by record opium poppy harvests, deepening government corruption and skyrocketing violence.

The top U.N. official in the country, Kai Eide, acknowledged scattered attacks but said the election "seems to be working well." A U.N. spokesman said there were no early reports of widespread irregularities, though ahead of the vote, the country had been buzzing with rumors of ballot-stuffing, bogus registrations and trafficking in registration cards on behalf of Karzai - allegations his campaign has denied.

Presidential candidate Ramazan Bashardost, who had 10 percent support in pre-election polls, said he washed off the supposedly indelible ink and called on authorities to "immediately stop this election."

"This is not an election, this is a comedy," Bashardost said.

Azizullah Lodin, chairman of the Independent Election Commission, denied there were widespread problems with the ink but said officials would investigate.

Militants carried out a string of assaults around the country. In northern Baghlan province, insurgent attacks closed 14 polling sites, and the police chief of Old Baghlan city and several police were killed, said Abdul Malik, the provincial election director. 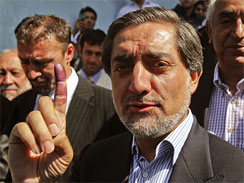 An AP reporter in southern Helmand province said more than 20 rockets had landed in the capital of Lashkar Gah, including one near a line of voters that killed a child.

A blast at a high school in Kabul serving as a polling center wounded an election monitor and briefly shut down voting, an election observer named Ezatullah said. Abdullah Azizi, a 40-year-old teacher, said he was at Abdul Hai Habibi school when the explosion occurred.

"We don't care about these blasts," Azizi said after voting reopened. "The women were afraid when they heard the explosion, but now I'm going to tell them come here."

Because of Foreign Ministry order that asked news organizations to avoid during voting, Afghan officials were reluctant to confirm violence.

At a high school in eastern Kabul, election workers were ready at 7 a.m., but no one was there.

Voter turnout in the insurgency-plagued Pashtun south is not only crucial to Karzai's chances but also to public acceptance of the results. Karzai is widely expected to run strong among his fellow Pashtuns, the country's largest ethnic group that also forms the overwhelming majority of the Taliban.

Abdullah, who is part Tajik, is expected to win much of his votes in the Tajik north, where security is better.