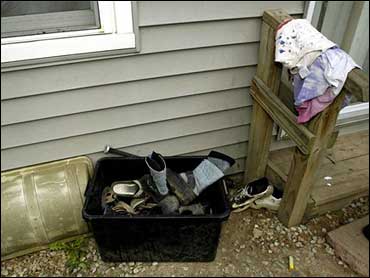 The 11 children removed from a house where authorities say some of them slept in homemade cages are polite, well-behaved, well-dressed and appear to have been well-fed, neighbors and authorities said Tuesday.

Their adoptive parents, Michael Gravelle, 56, and Sharen Gravelle, 57, denied in a custody hearing Monday that they abused or neglected the children, who are ages 1-14 and have conditions that included autism and fetal alcohol syndrome.

No charges had been filed as of Tuesday afternoon, and messages left with the couple's lawyer were not immediately returned.

Nine cages in all, each about 3 foot by 3 foot. Some had locks, others were blocked by furniture. Investigators say the entire room spelled of urine, Alfonsi adds. They were locked up, their parents say, for their own good.

The Gravelles have said a psychiatrist recommended they make the children sleep in the cages, Huron County Prosecutor Russell Leffler told the Norwalk Reflector. The parents said the children, including some who had mental disorders, needed to be protected from each other, according to a search warrant on file at Norwalk Municipal Court.

Leffler refused to speak with an Associated Press reporter Tuesday at his office.

Neighbors said they often saw or heard the children playing, and the family yard was littered with toys: plastic cars, tricycles, slides and an overturned skateboard near a wooden ramp. Seven bicycles were piled in a storage shed.

"Those kids were dressed better than some of the kids who live in Cleveland. They behaved like any other kids when they were outside playing," said Jim Power, who lives across the street.

At night, authorities say, eight of the children were confined in 3-foot-tall wooden cages stacked in bedrooms on the second floor. The cages were painted in bright, primary colors, with some rigged with alarms that would send a signal to the downstairs when a cage door was opened. One cage had a dresser in front of it, county sheriff's Lt. Randy Sommers said Tuesday.

"The sheriff and I stood there for a few minutes and just kind of stared at what we were seeing. We were speechless," Sommers said.

No one answered the Gravelles' door Tuesday, and the gray, four-bedroom house was dark. A pig, roosters and other animals shared the yard outside Wakeman, a city of about 1,000 people 50 miles west of Cleveland.

The children have been placed with four foster families and were doing well, said Erich Dumbeck, director of the Huron County Department of Job and Family Services.

"We're still trying to figure out what happened in that home. We don't have any indication at this point that there was any abuse," Dumbeck said.

Sommers said a social worker investigating a complaint contacted authorities. Dumbeck would not discuss the complaint.

According to the search warrant, the cages had mats and the house smelled of urine. One boy said he slept in a cage for three years, Sommers said. A baby slept in a small bed, and two girls used mattresses

Deputies said they were called to the home last year when a 12-year-old boy was upset and ran away for several hours. He was found not far away.

Alfonsi reports that a child services official noted that because the kids weren't adopted locally, no one knew they were here.

The family has lived in Huron County for 10 years and the children were adopted through other counties and states, Dumbeck said. He said his agency was trying to determine how the adoptions were completed.

"I don't believe there were any caseworkers checking in with this family," he said. Reviews are ordered only when there is a complaint.

One of the children, a boy born with HIV, was adopted as an infant in 2001 through the Cuyahoga County Department of Children and Family Services, the agency's director Jim McCafferty said. For caring for him, the Gravelles received a subsidy of at least $500 a month.

The private agencies who reviewed the couple's home life before the adoption gave them "glowing reports," McCafferty said.

Leah Hunter, who lives two houses away, said she often saw the children walking down the road.

"They looked OK. They hardly ever wore shoes but I'm a country girl and for me that's normal," she said.