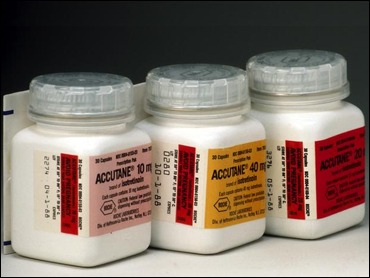 Accutane is an incredibly effective drug - a "silver bullet"- for people who have a very severe form of acne called cystic acne. It is usually prescribed for a five-month period and works well to get rid of and to prevent the recurrence of acne in about 40 percent of cases, depending on the dosage.

But the side effects, particularly for child-bearing women, can be devastating if it's not used properly.

Dr. Barney Kenet, a dermatologist who has prescribed the drug for many years, says, "If a woman should conceive while on Accutane; the risk of birth defects are extremely high. Doctors group Accutane into a category called, 'pregnancy category-X.' That's the most dangerous class of drug for a developing baby."

Despite many warnings since 1982 when the drug was first approved and put on the market, there have been about 2,000 pregnancies of women who have taken it during pregnancy.

Dr. Kenet says, typically, birth defects are "cranial facial abnormalities meaning the brain and the face are abnormal. There are other types of birth defects throughout the body, and many babies exposed to Accutane in utero do not survive."

Accutane is a potent teratogen - a substance that crosses the placenta and harms fetal development. Most women confronted with this information choose to abort if they become pregnant on Accutane. According to FDA, 61 percent of Accutane pregnancies are medically terminated.

Accutane is the Roche brand name for isotretinoin, a retinoid or vitamin A derivative. It was being tested for use against some hard-to-treat cancers when doctors noticed it was also having an amazing effect on skin disorders, including acne. Nobody understands exactly how it works. It attacks acne on multiple levels. It reduces sebum produced by the oil glands, which results in the development and eruption of severe cysts. The medication also decreases the amount of bacteria on the skin and in the hair follicle, and reduces the inflammation of the skin caused by the sebum and bacteria.

"It's just like any medication," says Dr. Kenet. "It needs to be used with caution, with education of the patient; it needs to be given to the appropriate candidate who can work together with their doctor by having regular checkups and blood tests to make sure that if side effects were to occur, they are addressed appropriately. And actually the manufacturer and all doctors who prescribe Accutane strongly recommend two forms of contraception for any woman using it."

Dr. Kenet adds, "in high practice, I use Accutane for cystic acne. That's a severe form of acne that heals leaving scars. I also reserve it for patients who communicate well, who are able to come for checkups and who are interested in working with me to get this extremely good result."

He notes he only prescribes the drug to high school girls if parents are present and involved throughout the treatment. "I don't prescribe it for high school girls who are not aware of its power and not able to participate in its careful use," he says.

As for other side effects, Dr. Kenet says, "Almost all patients get very dry skin. There are occasional aches and pains, especially in athletes. It can cause high cholesterol and - rarely - it causes depression."

It is also suspected, but not proven, that Accutane may cause profound mental effects. Among the more than 3,000 reports of what the FDA calls serious adverse psychological events now in its database are 190 suicides - many of them by teens - and many more attempts since the drug was first marketed in 1982.

Its manufacturer, Roche, says it does not believe that there is a cause-and-effect relationship between Accutane and psychological effects - including suicide - and that there is no scientific basis for believing Accuatne is the cause. But there is a warning about possible suicidal effects on the label.

There have been many Accutane patient education programs and warning labels put into practice since 1988. There's a program called The Pregnancy Prevention Program to educate doctors and patients about the dangers of Accutane. But despite these efforts, some doctors still fail to appropriately counsel and follow patients, and some patients still fail to appropriately take the medication.

There is a list of precautions that you need to follow very carefully if you're going to take the drug.

A woman of child-bearing age has to have two negative results from pregnancy tests, including one on the second day of her next expected menstrual cycle. She should use two forms of effective birth control while on the drug, even if she's already on the pill.

She should have repeat pregnancy tests every month. And women are also encouraged to register with a survey included in every single package of Accutane to help monitor any side effects that might occur.