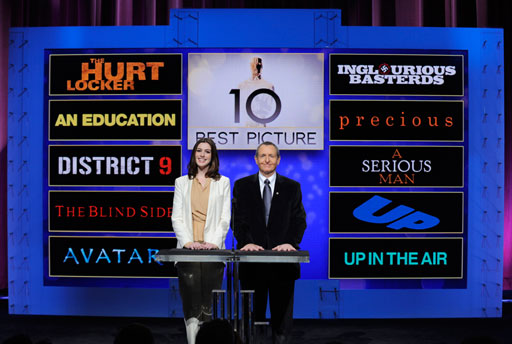 BEVERLY HILLS, Calif. - Two years after expanding the pool of Best Picture nominees from five to 10, the governors of the Academy of Motion Picture Arts and Sciences voted Tuesday to "add a new twist" to the competition for this year's top Oscar - and potentially douse criticism that the Best Picture category has been padded with films unlikely to win.

Instead of selecting the top 10 vote-getters from Academy members' ballots (in which films are ranked by choice from one to 10), the new process will require that a nominee for Best Picture must receive at least five percent of first place votes, stipulating that the number of nominated pictures will produce anywhere from five to 10 nominees.

The exact number of nominees won't be announced until the Oscar nominations are revealed on January 24.

After coming under criticism for failing to nominate either (or both) "The Dark Knight" and "Wall-E" for the 2008 Best Picture Oscar, the Academy widened the gate a bit, increasing the number of nominees from five to 10. This added greater variety to the race (including science fiction), and stirred studios to push harder in Oscar campaigns for films that might never have made it in a five-nominee contest.

It also led to grousing about padding the category (would "The Blind Side" have ever REALLY won?), and the seeming illogic of having 10 films vie for Best Picture but only five directors vie for Best Director.

"With the help of PricewaterhouseCoopers, we've been looking not just at what happened over the past two years, but at what would have happened if we had been selecting 10 nominees for the past 10 years," said Academy President Tom Sherak.

It was determined that over the past 10 years, the average percentage of first place votes received by the top vote-getting movie was 20.5%. After analyzing the data, Academy officials decided that 5% of first place votes should be the minimum to receive a Best Picture nomination, with a slate resulting in anywhere from five to 10 films.

"A Best Picture nomination should be an indication of extraordinary merit," said outgoing Academy executive director Bruce Davis. "If there are only eight pictures that truly earn that honor in a given year, we shouldn't feel an obligation to round out the number."

According to the Academy, had the new system been in effect before 2009, there would have been fields of anywhere from 5 to 9 nominees.

Final voting for Best Picture will continue as before, with a preferential system in which lowest number of first-place vote-getters are pulled and redistributed to the member's second-choice picks. The winning picture will still require endorsement of more than 50 percent of the Academy body.

The Visual Effects category will also expand its "bake-off" of contenders from seven to 10.

The Board also approved changes to the documentary short and feature-length categories, so that the closing date of eligibility matching the rest of the categories - December 31, 2011.

The 84th Academy Awards nominations will be announced live on Tuesday, January 24, 2012, at 8:30 a.m. ET at the Academy's Samuel Goldwyn Theater, and will be broadcast live on CBS.

The Oscars will be presented Sunday, February 26, 2012, at the Kodak Theatre at Hollywood & Highland Center, and televised live on ABC.