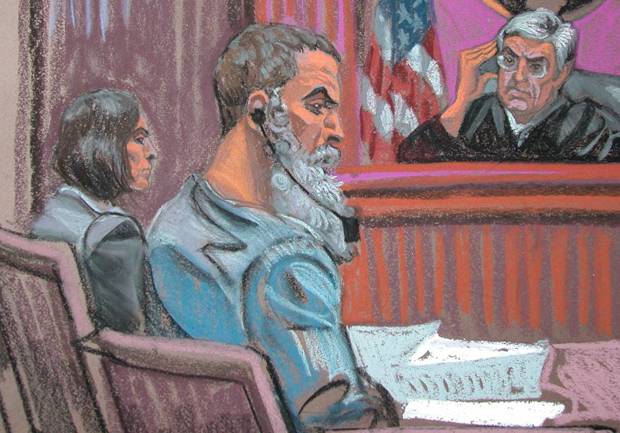 NEW YORK A Libyan charged in the deadly 1998 al Qaeda bombings of U.S. embassies in Africa pleaded not guilty Tuesday to terrorism charges in a brief proceeding that followed a familiar script in a courthouse that has hosted numerous terrorism cases in the past two decades.

A frail looking Abu Anas al Liby entered the plea in a heavily guarded federal courtroom in Manhattan 10 days after he was captured during an Oct. 5 military raid in Libya. The 49-year-old al Liby was interrogated aboard a U.S. Navy warship for a week before being brought to New York on Saturday.

Al Liby, who has a thick gray beard, kept his hands folded on his lap as the judge read the charges. His court-appointed federal defender, David Patton, entered the plea on his behalf.

Al Liby was handcuffed and led out of court after the judge ordered him detained as a flight risk. Assistant U.S. Attorney Nicholas Lewin had requested detention, calling al Liby a "clear danger."

Early in the proceeding, Judge Lewis A. Kaplan asked the defendant how he wanted to be addressed in court. Al Liby, who spoke in Arabic and listened to the proceeding with help from a translator, said he preferred to be known as Nazih Abdul-Hamed al-Ruqai.

There was no reference in court to al Liby's longstanding health issues, except for a request that the judge sign a medical order, which Kaplan said he had already done. Al Liby had signed an affidavit to say he could not afford to hire a lawyer.

Al Liby is charged in a Manhattan indictment in bombings that killed 224 people, including a dozen Americans. Known as one of al Qaeda's early computer experts, he is accused of helping plan and conduct surveillance for the bombings of U.S. embassies in Nairobi, Kenya, and Dar es Salaam, Tanzania. Al Liby is believed to have used an early-generation Apple computer to assemble surveillance photographs in Kenya.

Al Liby's family and former associates have denied he was ever a member of al Qaeda and said he has lived an ordinary life since coming home in 2011.

"The presumption of innocence is not a small technicality here," Patton said in email sent after the hearing. "In a 150-page indictment, Mr. al-Ruqai is mentioned in a mere three paragraphs relating to conduct in 1993 and 1994 and nothing since. The allegation is that he met with al Qaeda members about a possible bombing of the American embassy in Nairobi, Kenya, that ended up taking place five years later in 1998. There is no allegation that he had any connection to al Qaeda after 1994, and he is eager to move forward with the legal process in this case."

Al Liby's prosecution in the United States continues a policy of bringing suspected al Qaeda sympathizers and operatives to civilian courts rather than military tribunals.

The civilian court prosecutions have continued before and after President Barack Obama's administration was forced to reverse its plans to prosecute admitted 9/11 mastermind Khalid Sheikh Mohammed and several others in federal court in Manhattan and instead bring them before military tribunals.

Al Liby has been on the FBI's most wanted terrorists list since it was introduced shortly after the Sept. 11, 2001, attacks. A reward of $5 million was offered for his capture.

He is the sixth man to appear in a Manhattan court to face charges in the embassy bombing attacks. The other five are serving life sentences.

The source said that al Liby did answer some questions posed to him by interrogators. A second source described al Liby's demeanor as matter of fact.