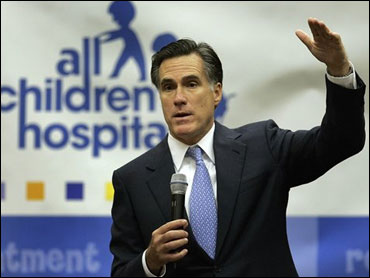 A Republican group that backs abortion rights will start an ad campaign this weekend in Iowa and New Hampshire portraying Mitt Romney as a flip-flopper and drawing attention to a questionnaire he filled out in 2002 endorsing legal abortions.

The ads by the Republican Majority for Choice suggest Romney's current anti-abortion stance is politically motivated. The group will spend more than $100,000 to air a 30-second television spot in Iowa and New Hampshire and run full page ads Sunday in the Des Moines Register, the Concord Monitor and the New Hampshire Union Leader.

"He's an opportunist," Jennifer Blei Stockman, national co-chair of Republican Majority for Choice, said in an interview. "It's important for voters to know who they are voting for."

Stockman and other members of the group's board have donated to the presidential campaign of former New York Mayor Rudy Giuliani, an advocate of abortion rights. Stockman contributed $2,300 to Giuliani's campaign last May.

But Stockman said the group itself has not endorsed a candidate in the presidential contest. She stressed that the Republican Majority for Choice and the Giuliani campaign have had no discussions regarding the ad campaign.

Earlier this month in Iowa, Giuliani expressed disapproval of any outside advertising effort that might surface on his behalf akin to the one John McCain's supporters have launched in South Carolina. McCain has asked his donors not to bankroll such campaigns.

Romney, the former governor of Massachusetts, has won the backing of some key religious conservatives but is still dogged by suspicions about his stance on some social issues. He has said he changed his view on abortion in 2004 during debates over stem cell research. He said he became convinced he could not publicly support abortion rights while being personally opposed to abortion.

Romney spokesman Kevin Madden said Wednesday, "The political group that is attacking and distorting Governor Romney's position is desperately trying to destroy the Republican Party's position on the issue of protecting life, while also supporting Mayor Giuliani and his pro-choice position that is at odds with grass-roots conservative Republicans."

"Governor Romney will not back down from his pro-life position, despite this group's attempts to weaken the party platform and promote Mayor Giuliani's pro-choice candidacy," Madden said.

The ads come as Romney is facing a serious challenge in Iowa from former Arkansas Gov. Mike Huckabee, a favorite among many religious conservatives and a critic of abortions. At the same time, Giuliani is ramping up his campaign in New Hampshire and would benefit from Romney stumbles in Iowa.

See the ad on the Republican Majority For Choice's Web site.

In 2002, Romney sought and obtained the endorsement of the Republican Majority for Choice. Stockman said the group decided to run the ads during a board meeting in October in New York.

"If we weren't so betrayed by the dishonesty of Mitt Romney's actions, we would not be running ads," Stockman said.

The ad is the second by a group opposed to Romney to cite his record on abortion. Last month, the Log Cabin Republicans, a group that advocates gay rights, aired an ad in Iowa and national cable that sought to undercut his support among social conservatives.

The new TV spots will air in Iowa during Sunday morning talk shows, including NBC's "Meet the Press" and ABC's "This Week" and during other news programs Sunday and Monday.

In 2002, while Romney was running for governor of Massachusetts, he sought the endorsement of the Republican Majority for Choice and filled out their one-page questionnaire and submitted his own attachment. In the questionnaire he checked off "yes" to a series of questions, including: "Do you support a woman's constitutional right to a safe and legal abortion without government interference, as defined by Roe v. Wade?"

He also checked off "yes" when asked if he backed "state Medicaid funding for abortions for poor women" and "yes" again when asked if he supported removing "anti-choice language form the National Republican platform."

Asked in the questionnaire if he considered himself pro-choice or anti-choice, Romney added an attachment that stated: "I prefer not to use labels pro-choice or pro-life as they are overly simplistic. My position is clear. I will preserve the right of a woman to choose as provided under current Massachusetts law."

The television ad shows images of Romney during his 1994 race for the U.S. Senate voicing support for abortion rights, followed by a 2001 quote in the Salt Lake Tribune where Romney stated that "I do not wish to be labeled pro-choice." The ad then shows Romney in a 2002 gubernatorial debate stating his support for a woman's right to choose and then in 2007 stating that he would like to see the landmark abortion case, Roe v. Wade, overturned.

"Take a stand Mr. Romney," a narrator says. "On behalf of the Republican Majority for Choice, ask Mr. Romney to flip-flop just one more time. And stay there."

Stockman said the campaign is likely to expand. "This is not the end of it," she said.