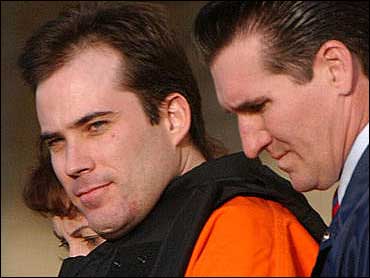 Eric Rudolph declared Monday that abortion must be fought with "deadly force" as a judge sentenced him to life in prison for setting off a remote-controlled bomb at an abortion clinic that killed an off-duty police officer and maimed a nurse.

"Children are disposed of at will," the 38-year-old Rudolph said, jabbing the air in a speech that echoed a rambling manifesto he issued in April when he pleaded guilty to four bombings in all, including the blast at the 1996 Atlanta Olympics. "The state is no longer the protector of the innocents."

Rudolph's fiery statement came as his victims confronted him court, branding the anti-abortion extremist a cowardly "monster" and recalling how their lives were devastated by the 1998 clinic bombing in Birmingham.

"It gives me great delight to know you are going to spend the rest of your life sitting in an 8-by-12 box," said the clinic's director, Diane Derzis.

Under a plea bargain that spared him a death sentence, Rudolph received two life sentences without parole for the Birmingham bombing. Next month, he will receive two more life terms for the deadly Olympic bombing and two other attacks in Atlanta.

Rudolph spent more than five years on the run in the North Carolina wilderness, employing the survivalist techniques he learned as a soldier. He was captured in 2003 while scavenging for food behind a grocery store.

When it was his turn to speak Monday, Rudolph angrily lashed out at abortion and the Birmingham clinic.

"What they did was participate in the murder of 50 children a week," he said, shackled at the ankles and wearing a red jail uniform. "Abortion is murder and because it is murder I believe deadly force is needed to stop it."

"He was unrepentant to the end and that surely is not a surprise to anyone involved in this case," reports CBS News Legal Analyst Andrew Cohen. "Like Timothy McVeigh, also a deadly bomber, Rudolph believes he is a noble soldier fighting a sacred war, and I think that's part of the reason why the feds decided to cut a deal and not allow Rudolph to turn his trial into political theatre."

CBS News Correspondent Jim Acosta reports Emily Lyons, the nurse who was scarred for life by Rudolph's attack, looked him in the eye and called him a cowardly "monster" who ultimately failed.

"When it was your turn to face death you weren't so brave again," Lyons said in a forceful voice, occasionally looking across the aisle at Rudolph. "You want to see a monster, all you have to do is look in the mirror."

The bombing also killed police officer Robert "Sande" Sanderson outside the New Woman All Women clinic. Sanderson's widow, speaking with Rudolph to her back, told the court she will "never forget the look on my son's face when I told him Sande was gone."

Seated at the defense table, Rudolph nodded in agreement.

Lyons was wounded by flying nails and other shrapnel. She has undergone 21 operations, lost her left eye and has scars on her arms and legs. She is no longer able to work.

But she said Rudolph failed to deter her or the work of the women's clinic.

"I faced five pounds of dynamite and hundreds of nails yet I survived," she said. "Do I look afraid? You damaged my body, but you did not create the fear you sought."

Rudolph faces sentencing Aug. 22 in Atlanta for the Olympic bombing, which killed one woman and injured more than 100 other people, and for 1997 bombings at an abortion clinic and a gay bar in Atlanta.

"I am sure the feds hope that, over time, in his cell, Rudolph will soften a bit and perhaps begin to tell more about how he committed his crimes and how he evaded the manhunt over all those years," reports Cohen. "I'm sure the FBI is salivating over the prospect of getting into Rudolph's mind and understanding how it worked back then."