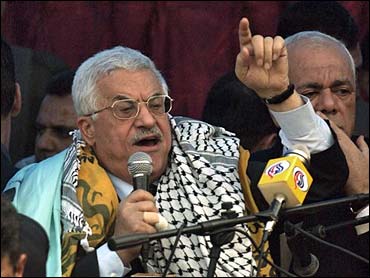 Abbas spoke to thousands of supporters after seven Palestinians were killed by Israeli fire earlier in the day in the northern town of Beit Lahiya.

"We came to you today, while we are praying for the souls of the martyrs who were killed today by the shells of the Zionist enemy in Beit Lahiya," Abbas said during a campaign stop in the town of Khan Younis in southern Gaza.

Meanwhile, the visiting Turkish foreign minister said he is carrying a message of peace from Syria to Israel: Damascus is ready to renew peace talks without preconditions, Abdullah Gul told the Haaretz daily.

And Israeli settlers have set up a team of criminal lawyers and a 24-hour hotline to handle the thousands of expected arrests of activists protesting and resisting the government's evictions from the Gaza Strip and West Bank.

A parliamentary committee urged the attorney general to indict settler leaders who are urging soldiers to refuse orders to evacuate settlers, while the Israeli Defense Forces are calling on the legal authorities to crack down on settlers who use violence against soldiers and police officers.

Two Israeli tank shells slammed into a field in response to Palestinian mortar fire Tuesday, killing seven Palestinians, including at least two children, in the deadliest single incident in three months. However, there were conflicting reports on the ages and identities of the dead. An AP photographer saw the bodies of at least two children.

The Israeli military said that at least four of the dead were members of Hamas and it is not the first time the militants have used children as shields.

Abbas later came very close to the fighting, with two loud explosions going off as he was about to visit survivors of the shelling at a northern Gaza hospital. Palestinian security officials said the explosions were set off by tank shells, a response to homemade rockets launched by Palestinian militants. Abbas' motorcade sped away.

Abbas, the front-runner in Sunday's election for Palestinian Authority president, is considered a moderate and has the tacit support of Israel and the United States. Abbas has criticized the armed Palestinian uprising and called for an end to violence.

His recent campaign rhetoric has caused some concern in Israel, though Israeli officials have refrained from publicly criticizing Abbas ahead of Sunday's election.

However, in recent days Abbas has been campaigning in Palestinian areas that have been the hardest hit by four years of fighting, and has courted militants.

He was given a hero's welcome by the crowd in Khan Younis, which included many armed men. He also held a flag of the Al Aqsa Martyrs' Brigades, a militant group with ties to Abbas' Fatah movement.

"We know the occupation has destroyed much and killed many, but our commitment will not be broken," he said.

An Israeli official, speaking on condition of anonymity, said that if Abbas is elected, "he will be judged by his actions, not his words, in providing security and fighting terrorism."

The fighting began Tuesday morning, with militants firing mortar rounds that injured an Israeli woman. In response, tanks fired two shells that slammed into fields as farmers picked potatoes and strawberries, witnesses said. The military said the shells were aimed at nine masked militants involved in firing the mortar rounds.

A Palestinian farmer said the militants were just leaving the area when the Israeli tank fired machine guns and shells. "I was lying on the ground when the shooting started," said the farmer, who gave only his first name, Suleiman.

"After it stopped, we ran and found body parts spread all over. One man I helped evacuate had lost his leg," Suleiman said from a hospital bed, his clothes stained by blood.

Tuesday's incident was the single deadliest in Gaza since Sept. 30 when an Israeli tank fired a shell at a group of gunmen in the Jebaliya refugee camp in northern Gaza, killing seven Palestinians and wounding 23.

Palestinian militants have stepped up mortar and rocket fire on Israeli settlements in Gaza and border towns in recent weeks as rival militant groups jockey for power ahead of a planned Israeli withdrawal from Gaza and try to portray the pullback as a retreat under fire.

Abbas has asked militants to stop firing rockets, but has also embraced the gunmen during his recent campaign swing through Gaza and stepped up his criticism of Israel in an effort to reach out to younger and more militant voters. Held aloft by militants at some rallies, Abbas has said he prefers to co-opt the armed men, rather than crack down on them as Israel demands.

Turkey is making an effort to improve relations after a child caused when its premiere accused Israel of engaging in state terrorism against Palestinians.

"In my opinion, the Syrian signals are serious and their intentions are good," Turkey's Gul told Haaretz. "They expressed willingness to resume negotiations without preconditions and they expect a positive Israeli response."

Syria has lately indicated that it seeks to resume peace talks which broke down in 2000. However, the Israeli response has been lukewarm, with Sharon insisting that Syria end its support for Palestinian militant groups in Damascus.