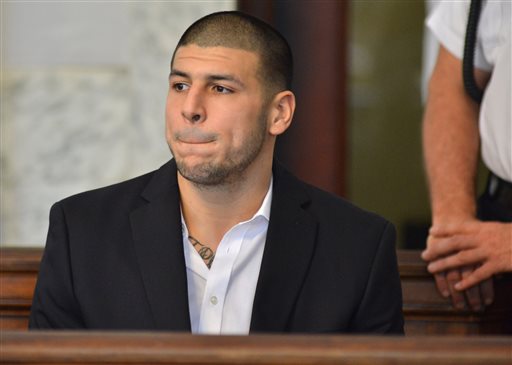 (CBS/AP) ATTLEBORO, Mass. - A cousin of former New England Patriot Aaron Hernandez is due in court Friday on a contempt charge after authorities say she refused to testify before the grand jury that indicted Hernandez in the murder of Odin Lloyd.

Tanya Singleton is scheduled to be arraigned Friday in superior court in Fall River. She was indicted on a criminal contempt charge for refusing to testify before the Bristol County grand jury hearing evidence in the case against Hernandez, District Attorney Samuel Sutter said.

The same grand jury on Thursday indicted Hernandez on first-degree murder and weapons charges in the death of the 27-year-old Lloyd, a semi-professional football player from Boston who was dating the sister of Hernandez's girlfriend.

Hernandez, 23, pleaded not guilty to murder and weapons charges in district court in June, and he is being held without bail.

He had a brief court appearance in Attleboro on Thursday afternoon. Afterward, his attorney Michael Fee said the defense was pleased to be on a path to a jury trial and was looking forward to testing the prosecution's evidence.

"There has been an incredible rush to judgment in this case," and the state doesn't have enough evidence to prove the charges, Fee said.

Hernandez's arraignment in superior court could come next week, Sutter said. He could face life in prison if convicted.

The grand jury also handed down one other indictment in the case Thursday. Hernandez associate Ernest Wallace is charged with accessory to murder after the fact. Prosecutors have said he was with Hernandez the night Lloyd died.

Wallace pleaded not guilty earlier in district court to the same charge.

Carlos Ortiz, who faces a weapons charge in district court connected to the case, was not indicted.

A jogger found Lloyd's body on June 17 in a North Attleborough industrial park about a mile from Hernandez's home. Prosecutors say Hernandez orchestrated the killing because he was upset at Lloyd for talking to people Hernandez had problems with at a nightclub days earlier. They say Hernandez, Wallace and Ortiz picked Lloyd up at his home in Boston's Dorchester neighborhood early on June 17 and then drove to the industrial park.

Authorities have not said who fired the shots, but according to court documents released in Florida, Ortiz told police that Wallace said it was Hernandez.