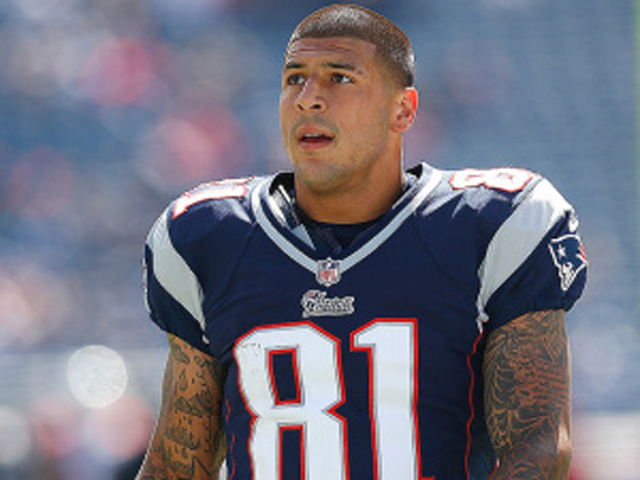 (CBS/AP) -- Aaron Hernandez, a 23-year-old tight-end for the NFL's New England Patriots, was charged with first-degree murder Wednesday in the death of his friend, Boston semi-pro football player Odin Lloyd, in an industrial park about a mile from Hernandez's North Attleborough, Mass. home on June 17. Following his arrest, the Patriots released him from the team.

June 14, 2013 - Lloyd, 27, went with Hernandez to a Boston club, Rumor. Bristol County Assistant District Attorney Bill McCauley said Hernandez was upset Lloyd had talked to people there with whom Hernandez had trouble. He did not elaborate.

June 16, 2013 - Hernandez texted two unidentified friends, according to McCauley. He asked them to hurry to Massachusetts from Connecticut. At 9:05 p.m., a few minutes after the first message to his friends, Hernandez texted Lloyd to tell him he wanted to get together, McCauley said.

Later, surveillance footage from Hernandez's home showed his friends arrive and go inside. Hernandez, holding a gun, then told someone in the house he was upset and couldn't trust anyone anymore, the prosecutor said.

At 2:32 a.m., they arrived outside Lloyd's home in Boston and texted him that they were there. McCauley said Lloyd's sister saw him get into Hernandez's car.

From there, surveillance cameras captured images of what the prosecutor said was Hernandez driving the silver Altima through Boston. As they drove back toward North Attleborough, Hernandez told Lloyd he was upset about what happened at the club and didn't trust him, McCauley said. That was when Lloyd began sending texts to his sister.

Surveillance video showed the car entering the industrial park and at 3:23 a.m. driving down a gravel road near where Lloyd's body was found. Four minutes later, McCauley said, the car emerged. During that period, employees working an overnight shift nearby heard several gunshots, McCauley said.

McCauley said Lloyd was shot multiple times, including twice from above as he was lying on the ground. He said five .45 caliber casings were found at the scene.

Authorities did not say who fired the shots or identify the two others with Hernandez.

"The defendant was walking through the house with a gun in his hand. That's captured on video," he said.

His friend is also seen holding a gun, and neither weapon has been found, McCauley said.

Then, the surveillance system stopped recording, and footage was missing from the six to eight hours after the slaying, he said.

Later that day, Hernandez returned the rental car, offering the attendant a piece of blue Bubblicious gum when he dropped it off, the prosecutor said. While cleaning the car, the attendant found a piece of blue Bubblicious gum and a shell casing, which he threw away. Police later searched the trash bin and found the gum and the casing. The prosecutor said it was tested and matched the casings found where Lloyd was killed.

At 5:30 p.m., a jogger calls police after finding Lloyd's body in the industrial park.

In the same day, a man files a lawsuit claiming Hernandez shot him in the face after they argued at a strip club in Miami in February.

June 20, 2013 - A news helicopter follows Hernandez as he drives from his home in North Attleborough to the Patriots' Gillette Stadium in Foxborough.

State police search brush with metal detectors and poles on a road leading to the entrance of Hernandez's subdivision.

June 21, 2013 - CytoSport, which makes Muscle Milk and other supplements for athletes, says it's ending Hernandez's endorsement contract, effective immediately, due to his ties to the murder investigation.

Police continue to investigate Hernandez in connection with Lloyd's murder and are led to a Providence Strip club.

Family members say Hernandez and Lloyd were together the night Lloyd died.

June 22, 2013 - State police return to Hernandez's home, this time with dogs, to conduct an additional search.

June 26, 2013 - Hernandez is taken away from his home in handcuffs and driven away in a police cruiser. Authorities later announce that he is under arrest and being booked at the North Attleborough Police Station.

Less than two hours after his arrest, the New England Patriots release a statement announcing his release from the team.

Hernandez is transported to Attleboro District Court where he is charged with first-degree murder in the death of Lloyd as well as five weapons counts. He is ordered held without bail.

That night, a home in Bristol, Conn. linked to Hernandez is searched by police. The home is reportedly owned by Hernandez's uncle.

Carlos Ortiz, 27, of Bristol, Conn. is charged as a fugitive from justice in connection with the murder of Lloyd. He reportedly waived extradition to Massachusetts and will face additional charges in Bristol County, Mass.

June 27, 2013 - In a bail review hearing, a judge in Fall River Superior Court in Fall River, Mass. denies bail for Hernandez. Prosecutors announce they are pursuing the maximum penalty, life without parole, for the defendant.

Reports surface alleging Hernandez may have had a role in a July 16, 2013 double-murder in Boston's South End. Authorities have not officially confirmed these reports other than to say that case is still under investigation.

That night, police ask the public's help in locating Ernest Wallace, 41, who is wanted for accessory after murder in connection with murder of Lloyd.

June 28, 2013 - Boston police execute a search warrant at the home of Hernandez. Reports say this could be tied to the 2012 double-murder probe.

Wallace turns himself in to authorities in Miramar, Fla. around 1:30 p.m.

Ortiz appears in court in Bristol, Conn. and a judge orders he be extradited to Massachusetts.