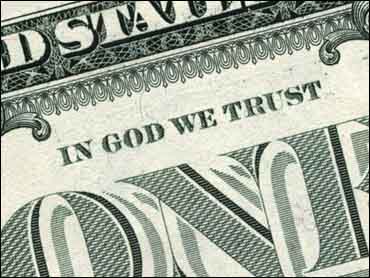 This story was written by CBS News correspondent Mark Phillips.


If my ninth-grade Latin teacher were still making squeaking sounds on a blackboard somewhere, she'd be pleased to learn of this. She always said a background in the classics would come in handy one day.

Granted, Miss Tanana (not her real name) probably didn't have a 21st century television quiz show in mind, but all that "amo, amass, amatting" (look it up) finally paid off in London this week.

The occasion was a taping of the local celebrity version of "Who Wants to be a Millionaire." The contestant, a flamboyant interior decorator who fronts one those room make-over shows, faced one last question for the big prize. Get it right and his designated charity, a childrens' hospice, would get the million-pound (about 1.7 million dollar) pay out.

The question was, "Translated from the Latin, what is the motto of the United States?"

Thinking long and hard, the contestant answered, "In God We Trust." After all, it is right there on the money. Wrong, he was told. But was he? In fact, it was the question that was wrong and the U.S. Embassy here was dragged into the controversy.

In God We Trust is, the embassy confirmed, the motto of The United States, designated so by several acts of Congress. It first came into use during the Civil War, when the Unionist government of the North was seeking to enlist all the allies it could, terrestrial and heavenly. The various acts of Congress (1864, 1907, 1955, 1956) were considered necessary when the Treasury started issuing coins and bills that omitted the phrase.

But, of course, In God We Trust never existed in the Latin. The phrase the quiz show question-setters were thinking of is E Pluribus Unum, which sits on the Great Seal of The United States and therefore on the dollar bill as well. It too, is often cited as an American motto, but has a less official legal pedigree.

The phrase translates as, "Out of the many, one," and is a tribute to the fabled melting pot of American society. That melting-pot concept may have come under closer scrutiny over the years as various racial, ethnic, regional, political and economic divisions have asserted themselves. But what was intriguing about the "Millionaire" argument is what it says about national mottos and the images they convey.

The religious connotation in the U.S. motto, while hardly unique, is a minority sentiment these days. Godly references do survive in some other countries. Catholic Poland, for example, uses, "God, Honor, Homeland." The British royal motto is still the ironically French "Dieu et mon Droit" (God and my Right). And another clutch of countries, from Morocco to the Philippines to (naturally) Iran, include references to the deity in one form or another.

Most other states, though, have tended toward more secular aspirations along the lines of the French "Liberté, Egalité, Fraternité" (Freedom, Equality, Brotherhood). Eternity and indivisibility are other common themes, sometimes ironically so. I don't know whether Austria's motto, "Austria est in orbit ultima" (Austria will be the last to perish) was adopted before or after 1939. And the old Austro-Hungarian Empire, which disintegrated in 1918, had the unfortunate motto, "Indivisibiliter ac Inseparabiliter" (Indivisible and Inseparable).

What's interesting about the U.S. motto, though, is that it reinforces overseas the perceived religious influence over American politics. Much as administration officials, from the president on down, have tried to disassociate the war on terror from its religious component, many abroad still try to paint it as a confrontation between the Christian West and the Islamic world.

Having the motto on the money is a constant debating aid to America's detractors. A brewing confrontation with another Islamic country — Iran and its nuclear ambitions — will further cement the impression among some that we are, in fact, living through a clash of cultures.

Variations on these musings could continue (ad nauseam?), but I'll end where I started. The producers of "Millionaire" have admitted the error in their ways and have taken the unprecedented step of ordering a re-shoot of their show. The interior decorator will get to answer another question and the childrens' hospice may get its money yet.
By Mark Phillips