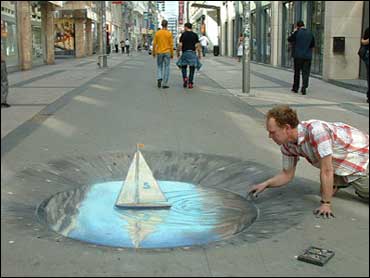 Depending on how you look at it, a work of art can have plenty of curb appeal. Hari Sreenivasan shows us the work of a master:


Over the centuries, millions have visited museums all over the world to see remarkable Rembrants, marvelous Monets and gorgeous Gauguins.

But all those art lovers over all those years would fit into a tiny corner of this museum: The virtual museum of the Internet, where untold numbers at this very moment are seeing - and marveling, and sharing - the three-dimensional pavement drawings of English artist Julian Beever. For this accomplished chalk artist, the Internet is his pavement.

"Exactly," Beever told Sreenivasan. "That's my medium, really. If it wasn't for the Internet, my work would be totally unknown.

We caught up with Beever a few days ago in New Orleans as he began his latest creation. He was commissioned by a business group to come up with a theme that reflects New Orleans' city life.

"In the past, I felt quite insecure really on the first day, not knowing that I would have enough time to get it finished. I've tried to be a little bit more cool about it. I've done so many of these and they always do get finished."

First he draws his design in miniature - in this case, a very expansive image: "Figures and things coming out of the hole [in the ground] exploding into life, blowing a fanfare out to the world."

The entire process will take three-and-a-half days. Beever says the first day is the hardest, outlining a scribble with the aid of a rope.

And there's the physical toll from drawing on the ground and running back and forth to look through the camera, hundreds of times, just to gain perspective.

"Feeling pretty tired now," he remarks. "None of us are getting any younger."

You seem, to get the full three-dimensional effect, you have to see Beever's work through a lens.

"I think because the camera limits what your brain can do," he said, "it limits the brain's ability to judge distance, it makes you only use one eye. And therefore you can make the brain believe stuff that otherwise it wouldn't believe."

"Your art wouldn't be your art without the camera," Sreenivasan said.

"No, you need to have a lens or a camera or something to view it with."

The original plan was to draw on a busy downtown sidewalk. The threat of rain moved it to this covered valet entrance at Harrah's Casino.

How much of a following does Julian Beever have? Just ask a parking valet: "I've seen a lot of paintings on the Internet. It's amazing how it comes to life."

(Julian Beever)
After art school, Beever supported himself by making two-dimensional chalk drawings on pavement for pennies from passers-by. He turned to three-dimensional art not by error but by trial, starting with a woman in a swimming pool.

Her leg didn't come out quite right.

"I didn't really have the experience at that time to realize exactly how to do that leg in relation to the height of the camera," he said.

But he learned from that mistake and has been wowing people ever since.

One woman watching his New Orleans drawing come to life was amazed as she peered through the camera: "It does look dimensional. Isn't that amazing? That is just amazing. This made the trip all worthwhile."

And she hasn't seen anything yet.

Beever's bare-bones chalk outlines are fleshing out. We're seeing who this is: Louie Armstrong bursting through the sidewalk.

"It's Louis Armstrong if I can get a likeness," Beever said. "If I can't, then it's just any musician!

His New Orleans drawing fully realized, we see an amazing piece of art.

But like all of Julian Beever's pavement drawings, it is destined to be swept away, erased by time.

"It doesn't worry me at all that this drawing will disappear after a couple of days in the rain, because the final product is the photograph," he said. "It's that photograph that goes on the Internet. Then thousands of people will see it. It will be there forever. It doesn't vanish, really. The drawing on the ground is just a vehicle.