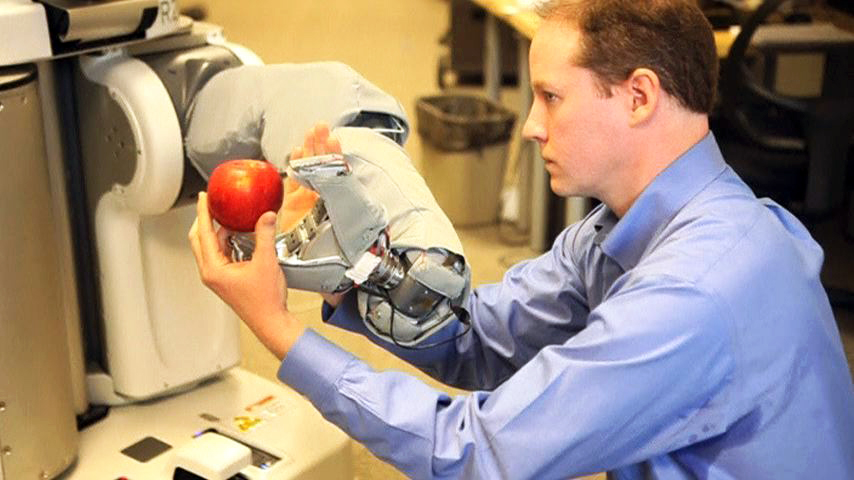 A uniquely specialized robot is helping Henry Evans tuck himself in for the first time in ten years. Evans became quadriplegic and mute after suffering a stroke in 2003. He now has limited use of only one finger.

Evans, who lives in Los Altos, Calif., is using his finger to operate a computer interface that controls the robot, which has the ability to feel its way through tasks with a sense of touch. He says that he wants to improve the lives of people with his type of disability by working with robotic engineers to develop the next generation of machines that will be able to assist them with daily tasks.

Speaking via text message to voice software over a computer, Evans recalls his first physical interaction with the robot.

"With the touch sensitive skin I can feel the robot keeping contact forces low but still in constant pursuit of its goal. I felt immediately that it wouldn't hurt me. But rather it seemed aware of my presence as it went about its business," said Evans via video conference.

Designer Charlie Kemp, an associate professor of biomedical engineering at the Georgia Institute of Technology, says most robots are built to work on factory production lines, rather than to interact safely with humans. So he looked to nature to make robots more human-friendly.

"Biological organisms, animals, insects, they have tactile sensing over their whole bodies. Their entire body is sensitive to touch. And robots haven't had that capability, so one of the first things we need to give robots is the sensor, not just eyes, not just ears, but skin," said Kemp who studied at MIT under iRobot founder Rodney Brooks.

It's the robot's artificial skin that sets it apart, allowing it to feel its way through designated tasks. The sensors on the skin feed back to a computer program which models the environment and the arm's orientation within it.

"The robot, in every moment in time, it makes a simple model of its arm and the arms contact with the world. And using this model it makes predictions on what will happen if I move this way or move this way. And then based on some clever mathematics, it says this is the best thing I can do to move close to my goal while keeping the forces low," said Kemp.

Kemp says keeping forces low is the key to successful human interaction. The arm is flexible, much like a human's and as it comes in contact with obstacles it gauges how much pressure to apply to reach its goal without damaging its surroundings.

Kemp says his team is now in the process of upgrading the robot by giving it the ability to map as it explores new environments. He says there is still a lot of research ahead, but believes that this type of technology will one day dramatically improve the quality of life for people with severe disabilities.

Why L.A. is paying $40K per mile to paint its streets white
Thanks for reading CBS NEWS.
Create your free account or log in
for more features.
View CBS News In
CBS News App Open
Chrome Safari Continue
Be the first to know
Get browser notifications for breaking news, live events, and exclusive reporting.