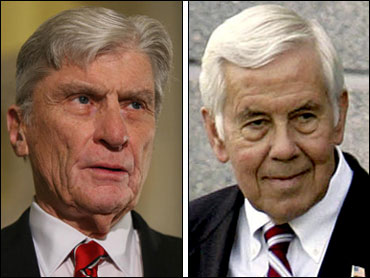 Sens. Dick Lugar and John Warner have gotten together and given birth to the Sensible Bipartisan Iraq Compromise Hailed by the Establishment Act of July 2007. If this is the best that the GOP's elder statesmen in the Senate can do, let's hope a new generation of statesmen rises soon.

Lugar and Warner are frank about not being able to force President Bush to change his strategy in Iraq unless Congress cuts off funds, but that doesn't keep them from offering their legislation undermining the surge. Lugar says, "We are attempting to ensure that the U.S. military and diplomatic policy is prepared for change" when Gen. David Petraeus reports in September. To that end, the Lugar-Warner amendment says President Bush shall "initiate planning" for a drawdown in forces, and present his plan to Congress — including "results from modeling and simulation efforts by appropriate departments and agencies of the U.S. government" — no later than October 16, 2007. This would be a meaningless exercise except as a way to create more political pressure to adopt an Iraq Study Group–style drawdown.

Never mind that the Pentagon is, as a matter of course, already engaged in such contingency planning. What exactly is Congress going to do with these plans when it gets them? Debate them on the Senate floor? Maybe representatives of al Qaeda and Jaish al Mahdi can be called to testify at the committee hearings.

Here Congress is not usurping just the role of the commander-in-chief, but also those of the combatant commander and commander of CENTCOM, whose responsibility it is to review such plans. If the Senate really were to micromanage this process, we're sure it wouldn't be long before our Iraq war plan would include highway funding for Sen. Byrd's West Virginia and a new courthouse in every state.

On the basis of his public statements, the last person to have any role in drawing up war plans in Iraq should be Senator Lugar, who is in the grip of a fundamental confusion about the conflict. He says we need to transition away from "interposing ourselves between sectarian factions." Does this mean that as al Qaeda continues to unleash savage bombings against the Shiite population we have to stand aside, as it's merely bloodletting between two "sectarian factions?" Lugar insists that we will still engage in counterterrorism after an ISG-style drawdown, but he seems utterly innocent of the realities with which our troops are grappling as they gain the upper hand against al Qaeda.

We have been able to win Iraqis to our side against al Qaeda only by providing them security. In the New York Times yesterday, Maj. Gen. Rick Lynch explained how it works in his area south of Baghdad: "When we go out there, the first question they ask is, 'Are you staying?' And the second question is, 'How can we help?'" Lugar and Warner want the answer to the first question to be "No," thus making it unlikely that Iraqis will aid us against al Qaeda. Fomenting civil war — to undermine the central government and drive desperate Sunnis into its arms — is a key strategic goal of the terror group, one that Lugar and Warner want to cede to it.

Their amendment also calls on President Bush to submit a new authorization for the war because our mission has changed since the original authorization in 2002. On their own terms, Lugar and Warner are about 4 1/2 years too late. We succeeded in toppling Saddam and ending his weapons-of-mass-destruction threat after the initial invasion. If Congress hadn't wanted us to fight against the ensuing insurgency to establish order — in keeping with our obligations as an occupying power — it could have acted then. That insurgency, of course, prominently featured some of the same enemies — the Fedayeen and the diehard Baathists — that we had fought during the invasion.

Perhaps what Lugar and Warner object to is that we have been fighting in the environment of a hotter civil war since the Samarra bombing of February 2006 (an al Qaeda operation). But the surge has begun to tamp down this intensified level of sectarian violence. In any case, all these considerations are moot, because President Bush has the constitutional authority as commander-in-chief to continue the fight against al Qaeda and other insurgent groups in Iraq without congressional authorization.

Finally, the amendment calls for the United States "to establish a predictable and regular multi-lateral diplomatic forum related to Iraq that meets frequently and is open to all parties in the Middle East." Senator Lugar believes "it would be in the self-interest of every nation in the region to attend such meetings." But the self-interests of the nations of the region are, unfortunately, not determined by Senator Lugar. If they were, the region would be a much more kindly and gentle place.

Lugar maintains that these meetings would be "a means of applying regional peer pressure against bad behavior." This verges on the childish. Has Lugar ever witnessed a meeting of, say, the Arab League? In the Middle East, peer pressure rarely discourages bad behavior. If certain nations don't attend, according to Lugar, "their intransigence will be obvious to the other players in the region." But Iranian and Syrian intransigence is already obvious. The question is, What are we going to do about it? Lugar and Warner's answer is to do both of these rogue states an enormous favor, by undermining our position in Iraq just as we are beginning to get a better handle on the security situation.

We, too, think diplomacy is important. We would love Lugar and Warner to offer a "sense of Congress" resolution citing any instance in history in which a country's diplomatic leverage has been enhanced by losing a war. If they were to succeed in discarding the progress that has recently been made in Iraq, Lugar and Warner would undermine not just our military position there, but, perversely, our diplomatic position in the entire region.

The Iraq debate is in a sorry state when something like the Lugar-Warner amendment passes for a serious proposal. At least they are providing a kind of constitutional lesson: in why the Founders, in their wisdom, didn't want Congress to conduct wars.