In the hands of a good salesman, even a simple potato peeler can have great curb appeal. Serena Altschul now with the "only in New York" story of one terrific salesman:

Even in a city of a million stories, the tale of Joe Ades stands out in a crowd - a dapper British street salesman charming people into buying a simple tool . . . and along the way having the time of his life.

"When you peel a potato, it doesn't matter whether you're right-handed, left-handed, or like a politician underhanded . . ."

"He loved selling the peeler, it was his favorite thing," Ruth Ades Laurent said of her father, whom New Yorkers knew as 'The Peeler Man."

"Look at that, you've never used a peeler sharper!"

"It" was a Swiss stainless-steel peeler that Joe came across in the early '90s, and thought people would buy.

"You get one for five, you get five for twenty."

Turns out, he was right.

"His philosophy was that a small amount of money builds quickly," Ruth said.

He sold tens of thousands. You do the math!

"Carrots, potatoes, celery, everything you want sliced thin, and it works," said one happy woman customer.

A born performer, Joe made the sidewalk his stage, his routine the pitch.

Which helps explain the other side of Joe Ades. The Rolls Royce. The Park Avenue apartment. The Good Life.

. . . but what really thrilled this peddler-by-day was New York at night . . . fine restaurants, theatre, jazz.

His favorite spot was at the exclusive Pierre Hotel, where he'd sip champagne and listen to Kathleen Landis play piano. 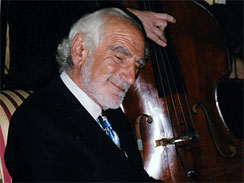 (Kathleen Landis)
"He always sat directly behind me," she recalled. "And then, he would pour a glass for himself, and then have a bottle of bubbly for me all night long."

Joe turned a lot of heads.

"People thought, like, he was an actor," Landis said. "A lot of people thought he was Sean Connery, because he was always so well-dressed, and so well-put-together."

But Ades was never ashamed of what he did. In fact, Joe loved being recognized.

"Occasionally people would come up and say, 'Oh, you're the peeler guy,'" said Ruth. "And other times, they would just look at him, and think, I know I've seen that man!"

Joe met Estelle Pascoe, his fourth wife, at the Pierre.

They lived in style . . . while he worked the street. He stored his peelers in the maid's room.

Ruth's father never told anyone how much money he made, but it was enough to spoil his family - even send his daughter to Columbia University.

Although Joe could have retired, he never planned to. "I can't imagine retiring," Joe said in 2008. "Retiring is like stopping living."

But a year ago, after a night out listening to jazz - the week he'd become an American citizen - Joe Ades died in his sleep. He was 75.

Which could have been the end to this story . . . but there's a new chapter.

Ruth has decided to follow in her father's footsteps. She showed us boxes of peelers.

"They're all packed, they're all from Switzerland. Dad imported them directly himself," Ruth said.

"Dad used to say, you know, 'Why can't you learn the peeler?'" she laughed. "'Because somebody should be able to take over.' That's my big regret, actually. I wish that I would have learned the peeler when he was alive, and, you know, we could've worked together. And I used to put it off - you know, 'Yeah, I'll do it Dad, when I'm ready.'" 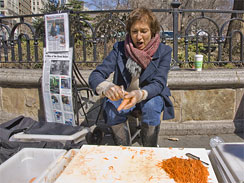 We caught her on the street in New York, peddling her wares. Some people spoke of her famed father: "We saw your dad do it for years," one man said.

And she had the patter down:

"When you peel a potato, it doesn't matter whether you're left-handed, right-handed, or like a politician underhanded . . ."

"I feel very close to my Dad when I'm doing it, yeah," Ruth said. "I mean, it makes me sad that he's not here. I often think when I'm working that my Dad's standing on the outskirts of the crowd, you know, watching."