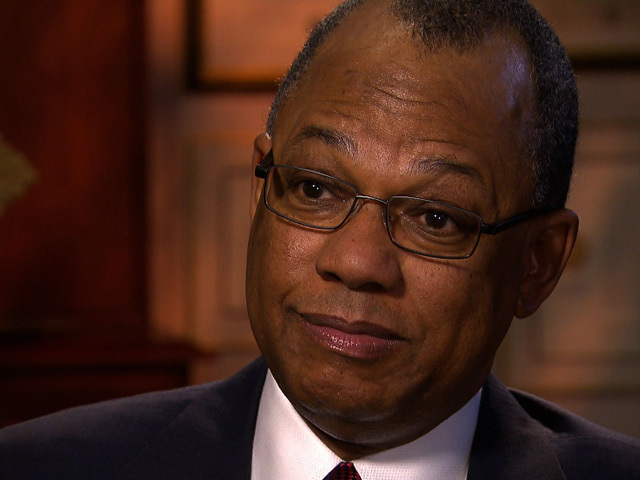 CBS Evening News anchor Scott Pelley has recently interviewed CEOs of several major American corporations for their thoughts on how to help the economy. Last week, Pelley sat down with the Rev. Dr. Calvin Butts, pastor of New York's Abyssinian Baptist Church, one of the oldest churches in the country.

Years ago, when commercial development in Harlem was sparse, the church stepped in and developed $600 million worth of property -- landmark deals with Pathmark groceries, Starbucks and others. In the process, the church helped kick-start the modern-day Harlem Renaissance.

A transcript of Pelley's conversation with Butts follows.

Pelley: Unemployment has been over 8.5 percent for more than two years now. What do you tell people who can't find work?

Butts: Keep looking. If you find a minister [or] a clergy person who tells people anything other than what is hopeful and encouraging them to keep going, get away from that one as fast as you can. We have to encourage people to continue to look, retrain, go to school, or start your own. Do whatever you need to do in order to survive. If we ever stop, if we ever give up, we're lost.

Pelley: But unemployment has never lasted so long for so many people in this country, never in our history. There are a lot of people, Reverend, who don't see hope out there.

Butts: Well, that's my job. I have to continue to foster -- especially in this season -- that hope springs eternal.

Pelley: As a job creator, let me ask you, how do you create jobs in this country?

Butts: Well, there's one way that we have found that works. It's a three-fold cord. It's not easily broken. It's a community-based organization, like Abyssinian, 203 years old. It's a private sector. It is the public sector. We've worked with our local officials and our federal officials, our state officials. And I'm here to tell you that it works. I've met leaders and captains of industry and commerce who want to do the right thing. They just need to have partners with whom they can work.

Pelley: Another thing facing the country right now is income disparity. There has never been a wider gap between the have's and have-not's. How do you see that?

Butts: We better pay attention to income disparity. If we don't, we're gonna face civil unrest in the nation. Poor people are tired of watching so few with so much, while so many have so little.

Pelley: What's your message to Congress?

Pelley: What gives you hope as we approach Christmastime and the New Year?

Butts: I'm a Christian. And my faith is rooted in Christ. I walk in the street and I meet good people, just smiling and raising their families. They're in the supermarket. This gives me hope. I see it every day, the light shines in the darkness. I see men and women feeding the hungry, doing good deeds. It's not over by a long shot. We are in the greatest nation in the world.