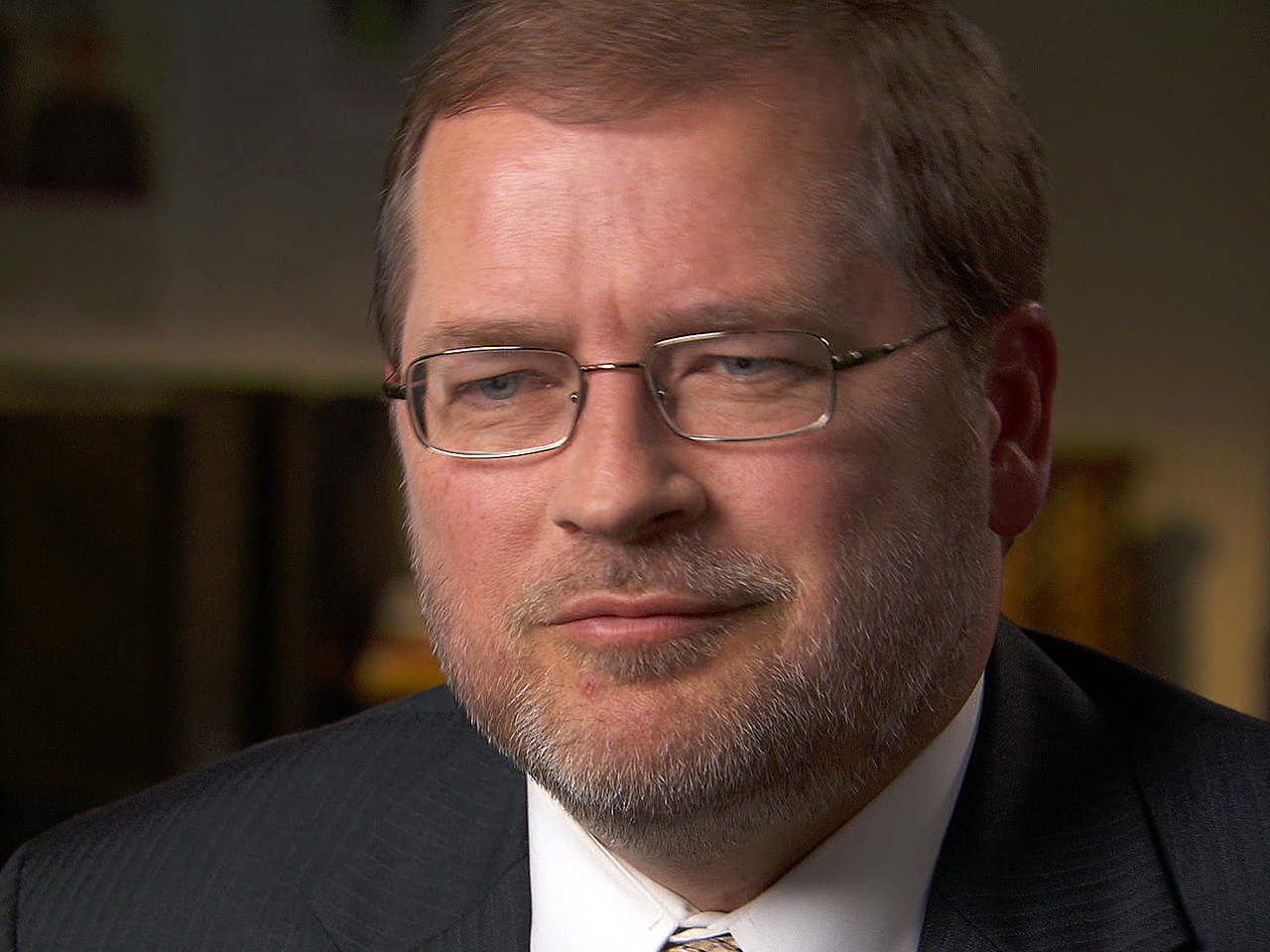 (CBS News) TAMPA, Fla. -- Every week in Washington, a group of prominent conservative lawmakers and ideological warriors comes together privately to network, get each other up to speed on their activities and, just maybe, enlist fellow attendees in their cause. Their ringleader is Americans for Tax Reform (ATR) president Grover Norquist, the conservative activist who has successfully pressured most elected members of the Republican Party to oppose any form of tax increases - no matter what's offered in return.

The Pledge: Grover Norquist's hold on the GOP

In conjunction with this week's Republican National Convention, Norquist moved the meeting to a huge, air-conditioned tent in Tampa - and invited a few members of the press to sit in on the proceedings. The lineup on Wednesday included some of the biggest names in the conservative movement: Faith and Freedom Coalition founder Ralph Reed, anti-feminist icon Phyllis Schlafly, National Rifle Association president David Keene, Virginia Attorney General and leading anti-"Obamacare" figure Ken Cuccinelli and Kansas Gov. Sam Brownback were among the 40 speakers who made their case in slightly more than 90 minutes.

For most attendees, this was not their first Norquist meeting. "If you were in Washington D.C., it's Wednesday morning, where would you be? ATR," said Sharon Day, co-chairman of the Republican National Convention, referring to the breakfast.

Norquist keeps the meeting moving briskly, telling speakers who are "on deck" to get to one of the four microphones positioned around the room so they can begin speaking as soon as the previous speaker finishes. He gives most speakers just two or three minutes to speak, prompting many to speak quickly in an effort to cram as much information as possible into their remarks.

The first speaker Wednesday was Mike Bober from the National Republican Congressional Committee, who opened his remarks by complimenting Norquist.

"Thank you," Norquist replied crisply, before Bober could continue. "How we doing on House races?"

Bober showed the room a pair of attack ads that his group had put together, which linked Democratic incumbents to President Obama. He then read a comment from a Democratic candidate critical of stay-at-home moms who claim to be feminists, which prompted derisive laughter from attendees.

It's not clear just how unfiltered the event really was: ATR made sure attendees knew a few members of the press were present. "Hey Mike? They're on the record," one young woman told an associate before he spoke. "I just want to make sure you know we're on the record." But attendees seemed to be operating much like they do when the doors are closed - and were clearly focused not on reaching across the aisle but moving up their movement on the right.

Brian Brown, president of National Organization for Marriage, sought donations for his organization's efforts to turn back same-sex marriage initiatives in four states: "Each of these will be multi-million dollar campaigns," he said. Reed sought volunteers for his group's efforts to make sure 17 million highly religious registered voters who did not cast ballots in 2008 make it to the polls in November.

Reed said his organization would be making phone calls, knocking on doors, sending mailers and blasting out as many as 15 emails per person to make sure they vote. "If they haven't opened [the emails], we're going to show up at their door, and we're going to login to their laptop to help them open it," he said. Keene, of the NRA, said he was seeking to do the same sort of voter registration outreach with gun owners; if they fail, he said, "future generations may look back on us as the folks who let the founders' dream slip away."

Marjorie Dannenfelser from the anti-abortion rights advocacy group the Susan B. Anthony List showed a jarring ad featuring an abortion survivor who said Mr. Obama "voted to deny basic Constitutional protections for babies born alive from an abortion." (Mr. Obama disputes this characterization.) Said Dannenfelser: "We know that from every election we have tracked data that the life issue moves voters in our direction."

Pastor Jim Garlow argued for religious leaders to be more open about their views. "For the last 50 years, he said, pastors have been silenced, muzzled, intimidated." He is seeking to get an amendment mandating that tax-exempt organizations refrain from political activity declared unconstitutional. Cucinelli discussed how to oppose the health care law in the wake of the Supreme Court ruling declaring it Constitutional; because it was upheld as a tax, he said, "repeal only requires Paul Ryan and 50, not 60, senators." (Republicans have discussed using an arcane rule called reconciliation, which is tied to budget matters, to get around the Senate filibuster rule.) "It's good to fight when the cause is good, so let's get to it," he said.

Some attendees, like talk show host Michael Medved, plugged their books; others, like former Democrat Artur Davis, offered condensed versions of their stump speeches. But most either wanted help with their cause or simply a proverbial seat at the table: Many of the lesser-known speakers, including representatives from the state "center-right" meetings - in addition to Norquist's national meeting, there are 64 smaller meetings in 48 states - seemed excited just to be included. Also present was a representative from Microsoft, who talked about protecting intellectual property; American Crossroads president Steven Law, whose group is spending tens of millions to influence the 2012 election; Romney surrogate Bay Buchanan; advocates for fracking and school choice; and a conservative member of the European Parliament from Britain named Martin Callanan, who told the crowd, "we live in your future if Obama is elected."

One of the final speaker was the venerated Schlafly, who inveighed against "Obama's war on religious freedom." She described the GOP platform, with its conservative language on social issues, perhaps the "best platform ever," and stated that "God has blessed this nation more than any other country."

But it was Brownback, the Kansas governor, who offered a line that best summed up the mix of conservative activism and self-congratulation that pervaded the room. "Ronald Reagan," a beaming Brownback told attendees, "would be proud of you."