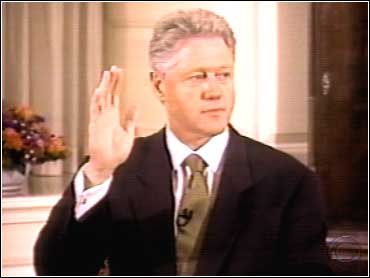 CBSNews.com's Alexandra Cosgrove takes a look back at the Clinton years.

Nov. 7, 2000 - Election Day. The presidential race is too close to call and will remain that way for several weeks due to contested voting in Florida. Hillary Rodham Clinton wins New York Senate seat.

Sept. 20, 2000 - Independent counsel announces that the Whitewater investigation is closed due to insufficient evidence against the president and first lady.

Aug. 14, 2000 - President Clinton speaks at the opening of the Democratic National Convention.

April 2000 - The unemployment rate drops below 4 percent for the first time in more than 30 years.

Feb. 12, 1999 - Senate acquits president on impeachment charges. A total of 67 votes were necessary to convict. Voting was 55 against and 45 in favor of the perjury charge. Obstruction of justice charge failed 50-50.

Jan. 27, 1999 - The Senate rejects a motion to dismiss the two impeachment counts against the President.

Dec. 19, 1998 - House of Representatives approves two articles of impeachment against the president.

Dec. 12, 1998 - While in Jerusalem on a Middle East peace mission, President Clinton says he will not resign from office and again denies lying under oath. The House Judiciary Committee approves the fourth and final article of impeachment and dismisses censure as an option for punishment.

Dec. 9, 1998 - House Judiciary Committee unveils articles of impeachment against President Clinton. Two articles allege that he lied in the Paula Jones sexual harassment case and in his testimony before Starr's grand jury. The others allege that he abused the powers of his office and obstructed justice in the Monica Lewinsky affair.

Dec. 6, 1998 - The president's legal team appears before the House Judiciary Committee, arguing that the president should not be impeached.

Sept. 21, 1998 - Videotape of President Clinton's grand jury testimony, along with 2,8000 pages of supporting evidence to Starr's report, is made public.

Sept. 11, 1998 - House votes to release the Starr report on the Internet. At a prayer breakfast, President Clinton says, "I don't think there is a fancy way to say that I have sinned," and expresses regre for hurting Monica Lewinsky and her family.

Sept. 9, 1998 - Starr sends his report of possible impeachable offenses to Congress. The president tells a Florida audience, "I let you down. I let my family down. I let this country down. But I'm trying to make it right. I determined to never let anything like that happen again."

Aug. 20, 1998 - President gives DNA sample to Starr for comparison with a reported semen stain on a dress owned by Monica Lewinsky.

Aug. 17, 1998 - Via closed circuit television, President Clinton testifies to the Lewinsky grand jury. In an evening television address to the nation he admits that he had a "not appropriate" relationship with Lewinsky, but insists that he never told anyone to lie about it.

April 24, 1998 - In five hours of videotaped testimony, Starr questions Hillary Rodham Clinton at the White House about her legal work for the failed Madison Guaranty Savings and Loan during the 1980s.

April 1998 - Arkansas federal judge dismisses Jones' sexual harassment suit against President Clinton, saying her complaint, even if true, would not constitute a violation of law.

March 15, 1998 - Former Clinton aide Kathleen Willey appears on CBS News' 60 Minutes and says the president made unwelcome sexual advance towards her in 1993.

Jan. 27, 1998 - Kenneth Starr opens grand jury probe into the Monica Lewinsky allegations. Appearing on NBC's Today, Hillary Rodham Clinton says the controversy has been fabricated by a "vast right-wing conspiracy." The New York Times reports that Lewinsky met with President Clinton at the White House two weeks after she was subpoenaed to give information in the Paula Jones case. Mr. Clinton makes no mention of the controversy in his State of the Union speech.

Jan. 21, 1998 - The Washington Post reports the existence of taped recordings of President Clinton and Lewinsky. The president tells PBS's Jim Lehr, "There is no improper relationship."

Jan. 13, 1998 - With FBI help, Tripp wears a body mike during a meeting with Lewinsky and records their conversatin.

Jan. 12, 1998 - Linda Tripp contacts independent counsel Kenneth Starr's office, and gives them 20 hours of taped conversations she had with Lewinsky.

Jan. 7, 1998 - In a sworn affidavit, Monica Lewinsky denies having an affair with President Clinton.

December 1997 - Tripp reportedly tells Lewinsky that she will testify about their conversations regarding Lewinsky's alleged trysts with President Clinton.

May 27, 1997 - Supreme Court rules Paula Jones may pursue her lawsuit against Mr. Clinton, while he's still in office.

Jan. 16, 1996 - On a book tour promoting It Takes A Village, Hillary Rodham Clinton is asked about the travel office fiasco and Whitewater. She promises the truth will come out.

November 1995 - According to sources, Monica Lewinsky becomes involved in a sexual relationship with the president.

June 25, 1994 - President Clinton hosts Rabin and Jordan's King Hussein for the signingof the Washington Declaration which lays the foundations for the formal Israeli-Jordanian peace accord.

May 6, 1994 - Sexual harassment lawsuit against President Clinton is filed by Paula Jones.

May 25, 1993 - The White House reconsiders the firing of travel office workers. Five are placed on administrative leave. Two remain fired.

May 19, 1993 - All seven workers in the White House travel office are fired after questions of financial impropriety are raised.

February 1993 Distant Clinton cousin writes memo suggesting she and a colleague take over the running of the White House travel office.

March 16, 1992 - While campaigning, Hillary Rodham Clinton is asked about profits from the Rose law firm where she worked.

Feb. 18, 1992 - Mr. Clinton finishes second in the New Hampshire primary. He calls himself "The Comeback Kid."

Feb. 6, 1992 Story erupts that Mr. Clinton used the system to avoid being drafted during the Vietnam war.

Jan. 24, 1992 - Flowers holds press conference stating she had a relationship with Mr. Clinton for 12 years. Excerpts from tape-recorded telephone conversations between the two are released.

Jan. 23, 1992 - The Clintons appear on CBS News' 60 Minutes. Mr. Clinton tells correspondent Steve Kroft that he has "caused pain" in his marriage.