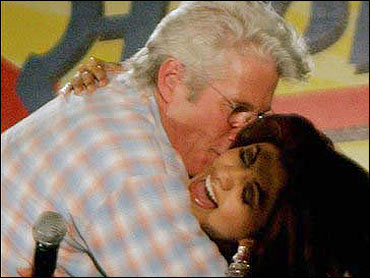 The court Tuesday suspended all legal proceedings against the pair until it decides on the proper jurisdiction for the case.

Gere embraced and kissed Shetty on her cheek at a public AIDS awareness event in New Delhi on April 15, prompting Hindu hard-liners to allege the pair had offended the sensibilities of India's traditionally conservative culture.

The case has grabbed headlines, although the allegations have failed to stir any wider outrage among Indians, most of whom have responded with either mocking bemusement or utter indifference.

Hindu activists filed three cases against Gere and Shetty, including one in the northwestern city of Jaipur, where a judge last month issued an arrest warrant for Gere.

Shetty's lawyer on Monday asked the Supreme Court to combine all the three cases and shift them to Mumbai, where the actress lives.

On Tuesday, Supreme Court Chief Justice A. G. Balakrishnan and Justice R. V. Ravindran put all legal proceedings over the kiss on hold until it could make a decision on a petition filed by Shetty's lawyer to combine all three cases and shift the hearings to Mumbai, where the actress lives. The petition was filed Monday.

Addressing the court Tuesday, Shetty's lawyer, Anand Grover, called the cases "frivolous" and "a total misuse of the legal process."

The court did not say when it would make its final ruling on the petition.

Shortly after the brouhaha erupted, Gere, 57, apologized for any offense he may have caused. But he also said the whole controversy was manufactured by a small hard-line political party.

Gere is a frequent visitor to India, promoting health issues and the cause of Tibetan exiles, tens of thousands of whom live in India.

Shetty, a well-known actress in India, became an international star after her appearance on the British reality show "Celebrity Big Brother."