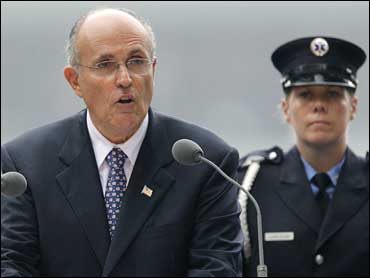 This story was written by CBS News reporter Ryan Corsaro.


On the sixth anniversary of the 9/11 attacks, Republican presidential candidate Rudy Giuliani recounted the "strength and resilience" of fallen rescuers at a ceremony in lower Manhattan. His appearance and praise for the fallen served as a stark reminder of his performance on 9/11 -- an image that is driving his presidential campaign.

Giuliani is best known for his leadership during the World Trade Center attacks, when he was mayor of New York City. In a new CBS News/New York Times poll, 78 percent of registered voters say he handled the 9/11 attacks well. Giuliani tops most national polls among the Republican presidential contenders, though the official candidacy of Fred Thompson has hurt him in the polls.

But Giuliani continues to be criticized for making 9/11 part of his campaign. The Democratic National Committee sent out a petition last spring demanding that Giuliani "stop politicizing 9/11" in response to an attack he made on Democrats at a New Hampshire debate. Some families of victims in the World Trade Center collapse asked that he not speak today, arguing that his presidential aspirations put the event in a political context.

Campaigning in Florida and Texas last weekend, Giuliani mentioned today's anniversary at every stop -- including a 9/11 remembrance luncheon attended by local fire, police, and rescue workers in Orlando. When asked on Saturday whether his evocation of the Sept. 11 tragedy while campaigning was questionable, Giuliani answered a reporter firmly.

"You have to talk about it," he said. "Sept. 11, along with the many other things that it is, it is political. It was an attack on America. That would be like saying after the attack on Pearl Harbor, Americans shouldn't talk about it."

And he is certainly talking about it -- the subject even came up while he was discussing the weather with a family in Houston over coffee. "I'll always remember that Sept. 11, it was one of the most beautiful days of the year," Giuliani said, talking about the hours before the city skyline was filled with thick smoke and ash. "Rarely does it rain two days in a row in New York in September."

While Giuliani stresses that 9/11 is woven into the political discussion of America's future, he says attending the memorial ceremony today is altogether different for him.

"That's personal," he says. "I was there when it happened, and I've been there every year since then. If I didn't, it would be extremely unusual."

Giuliani delivered a reading this morning just after 9:59 a.m., when a moment of silence was held to mark the falling of the South Tower. He had no public appearances scheduled for the rest of the day.

One of the families attending the ceremony had reasons beyond the political for opposing Giuliani's presence. Former Deputy Fire Chief of New York's Seventh Division Al Santora was there to pay tribute to his son, Christopher, the youngest firefighter to die on Sept. 11, 2001.

"I think it's an absolute disgrace to invite him to speak," Santora told CBS News. "He's the primary reason why so many of these guys are sick and some have died."

Santora charges that while then-mayor Giuliani was in charge of overseeing the city's response and cleanup surrounding the decimated towers, he did not provide recovery workers with a breathing apparatus until November. Many recovery workers, residents, and even members of the media have developed respiratory problems from breathing the air at ground zero.

There is no question that today's anniversary, more than half a decade after the attack, still affects Giuliani. And while people question a positive political windfall for him today, Giuliani's campaign says it's not political.

"If you know Rudy Giuliani, he'd be down there paying his respects whether he was invited or not," Giuliani senior advisor Tony Carbonetti said in a statement released by the campaign. "This is something that happened to him as a person, as a New Yorker, as a mayor and as an American. To say he's politicizing it -- he never would do anything like that."

Giuliani admits that he is always reminded more of the event in days leading up to the anniversary, although he says that regarding 9/11, "every day is an anniversary." Looking back, he says two main things have surprised him in the years since the attacks. One, that Osama bin Laden has not been caught. And two, that the United States has not seen another large scale attack, as top intelligence officials had warned him for years.

He says he will always be standing amongst the families and city officials, rescue crews and responders on the quietest day of the year in New York. Speaking with reporters last weekend, Giuliani told them that if he had not been there today -- whether avoiding political scrutiny or not -- the guilt would be too heavy for him.

"As a personal matter," he said with downcast eyes, "I couldn't live with myself."