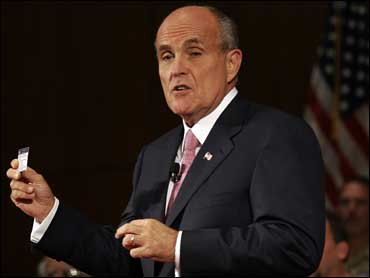 Rudy Giuliani, after holding the front-runner spot in the race for the Republican presidential nomination for months, has seen his lead nearly evaporate with the entry of former senator and TV star Fred Thompson into the race, a new CBS News/New York Times poll finds.

The poll contains other foreboding signs for the former New York City mayor as well, including indications that Republican primary voters may not buy his argument that running America's biggest city makes Giuliani fit to occupy the White House.

After seeing his support among Republican primary voters rise to 38 percent in August, Giuliani was backed by only 27 percent of respondents in the most recent survey, narrowing his lead over Thompson to 5 percentage points after holding a 20-point edge last month.

While Thompson, at 22 percent support, is now a close second to Giuliani, he was not the only Republican to seemingly benefit from Giuliani's fading numbers. Arizona Sen. John McCain, who was written off by some after months of staff upheaval and disappointing fundraising, saw his support increase 6 points since the last survey to 18 percent. On the other hand, former Massachusetts Gov. Mitt Romney, who won August's straw poll in Ames, Iowa, saw little benefit nationwide, scoring 14 percent support - largely unchanged since last month.

Giuliani has based much of his presidential campaign around his actions as New York mayor during and immediately after the September 11, 2001 terrorist attacks. Strategically, this makes sense: 25 percent of GOP primary voters cite 9/11 as the reason they back Giuliani, and 82 percent of them believe Giuliani is a strong leader.

But beyond his record on 9/11 and his leadership abilities, Giuliani may face several problems. In recent Republican presidential debates, Giuliani has made the point that none of the top Democrats in the race - Hillary Clinton, Barack Obama or John Edwards - has run a state, city or business. Yet only 48 percent of registered voters believe that being a big-city mayor qualifies one to be president, a sentiment shared equally by Democrats and Republicans.

On the other hand, registered voters overwhelmingly believe that being a senator or governor provides the experience necessary to be president. Romney has been a governor, while all the other top candidates in the race are serving or have served in the Senate.

Also troubling for Giuliani may be how knowledgeable his own supporters are of his tenure as mayor, aside from 9/11. A majority of Giuliani supporters were unable to say whether crime went up or down during his administration, despite his frequent mentions of making New York safer. And more than 70 percent of Giuliani supporters didn't know whether race relations got better or worse under Giuliani - several well-publicized incidents involving New York police are credited with exacerbating racial tensions in the city while Giuliani was mayor.

There even appears to be some ignorance among Giuliani's supporters on the issue that most separates him from the rest of the GOP field: his support for abortion rights. While 41 percent say Giuliani favors legal abortions, 31 percent believe, incorrectly, that he opposes them.

However, even if more Republicans become aware of his position on abortion, Giuliani may still win the nomination. By a 2-to-1 margin, Republican primary voters said they could vote for a less conservative candidate if they believed that candidate would win in a general election, where Giuliani's moderate views on social issues could allow him to win support from independent voters.

Giuliani may also see his lead stabilize or even grow if Thompson stumbles out of the gate. More than two-thirds of Republican primary voters have yet to decide if they view the "Law & Order" star favorably or unfavorably, while 40 percent view Giuliani favorably - the highest percentage among the top Republican candidates.

While the Republican race has been tumultuous, the Democratic contest has been relatively static for the past month. Clinton remains firmly in the lead among Democratic primary voters, with 44 percent support, trailed by Obama at 26 percent and Edwards at 17 percent - all largely unchanged since August.

Clinton also meets expectations by leading Obama by more than two to one among women. But they are nearly even among male Democratic voters.

This poll was conducted among a random sample of 1263 adults nationwide, interviewed by telephone September 4-9, 2007. The error due to sampling for results based on the entire sample could be plus or minus three percentage points. The error for subgroups is higher. An oversample of those with family members who are now serving in the U.S. armed forces or the U.S. reserves was also conducted for this poll, for a total of 349 interviews among this group. The results were then weighted in proportion to the composition of the adult population in the U.S. Census. The margin of error for military families is plus or minus 5 percentage points.