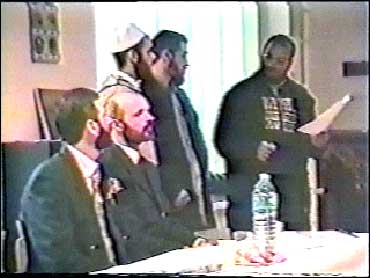 A wedding video shot in a Hamburg mosque has been broadcast for the first time and shows grainy scenes of Sept. 11 al Qaeda suicide pilots celebrating with other alleged plotters, possibly including suspects still not formally identified.

The video of the October 1999 wedding of Said Bahaji being celebrated in a large room at the al Quds mosque — suspected as a recruiting center for al Qaeda operatives — has been in the hands of investigators since shortly after the Sept. 11 attacks on New York and Washington.

In the immediate aftermath of the terror attacks, the Bahaji wedding video provided investigators critical links between the suicide hijackers and other suspected members of the Hamburg cell.

Attorney General John Ashcroft cited the video at a news conference with German Interior Minister Otto Schily on Oct. 31, 2001. Ashcroft noted that Zakariya Essabar, a Moroccan who left Germany on Sept. 6, 2001, and remains at large, appeared along with Ziad Jarrah, suspected pilot of the hijacked plane that crashed in Pennsylvania, and Marwan al-Shehhi, suspected of piloting a jet into the south tower of the World Trade Center.

In the video broadcast Tuesday by ABC and CNN and subsequently distributed to other television outlets by Associated Press Television News, there's a close-up of a bearded al-Shehhi, who had shaved by the time of the Sept. 11 attacks.

Along with congratulations for Bahaji, who is now a fugitive, there was a fiery speech by Ramzi Binalshibh, the suspected logistician of the Sept. 11 attacks who is in U.S. custody after his September arrest in Pakistan.

The wedding coincided with the time when German prosecutors say the Hamburg al Qaeda cell united around the plot to use airplanes to attack the United States.

"I could imagine that the seed was sown there," chief German federal prosecutor Kay Nehm told reporters in August 2002.

Those identified in the video has grown to more than 20, including lead hijacker Mohamed Atta; Mohamed Haydar Zammar, an alleged al Qaeda recruiter now in Syrian custody; and Mamoun Darkazanli, a Syrian-born German import-exporter who the United States believes was involved in the plot but who has not been arrested.

Also present was Abdelghani Mzoudi, a Moroccan held in Germany whom federal prosecutors expect to indict for his role in aiding the Hamburg cell.

Little emphasis was placed on the video during the Hamburg trial that ended with Sept. 11 plotter Mounir el Motassadeq's conviction on more than 3,000 counts of accessory to murder and belonging to a terrorist organization. He was sentenced to 15 years in jail.

"I haven't seen the video," said Stephen Push, an American whose wife was killed Sept. 11 and who joined the el Motassadeq trial as a co-plaintiff. "From what I've heard it's just a couple of guys at a wedding. It links Bahaji to some of the hijackers. Beyond that I don't know what significance it has."

For reasons never given, the video was not shown at the trial, but still photos taken from it were.

It was cited just a few times, including in testimony by Arabic expert Fath Franzmathes who quoted from Binalshibh's speech: "Every Muslim must have the aim to free Islamic soil of any tyrant."

While German federal prosecutors have said dozens of people remain under investigation, they won't say if they include other people in the video.

"It's just one piece among many" pieces of evidence, spokeswoman Frauke Scheuten said Wednesday.

Here is a description of the video clip:

1. Medium shot of men greeting one another
2. Pull-in to Marwan al-Sheehi (beard/glasses/holding book) - suspected pilot of United Flight 175
3. Close up of men greeting each other and Ziad Jarrah (second man/beard/glasses/smiles into camera) - suspected pilot of United Flight 93
4. Medium shot of groom Said Bahaji (tall/beard/handkerchief) being greeted
7. Pull-in to and highlighted face of Mamoun Darkanzali
9. More video of men at wedding party