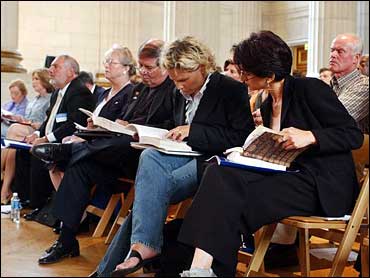 The Sept. 11 commission report recommending major changes in how Congress and the White House oversee intelligence agencies signaled a new phase to the fight for reform waged by victims' families.

"It's going to be a very difficult struggle," Steve Push, whose 42-year-old wife Lisa Raines died on the plane that struck the Pentagon said. "These forces will try to prevent these changes from taking place."

Released Thursday, the report (.pdf, 7MB) found that America's leaders failed to grasp the gravity of terrorist threats before the devastating 2001 attacks, taking actions so feeble they never even slowed the al Qaeda plotters.

The commission stopped short of saying the hijackings could have been prevented. While the panel did not fault President Bush or former President Clinton, it did say both failed to make anti-terrorism a top priority.

"We do not believe they fully understood just how many people al Qaeda might kill and how soon it might do it," the 10-member, bipartisan panel said in its unanimous findings.

"We also believe that they did not take it as seriously as it should be taken. It was not their top priority," Thomas Kean, the Republican chairman, said at a news conference with members of the National Commission on Terrorist Attacks Upon the United States. "We do believe both presidents could have done more in this area."

The panel warned "we are not safe" — and called for major intelligence changes, like a national counterterrorism center and a Cabinet-level national intelligence director to centralize efforts now spread over 15 agencies in six Cabinet departments, including the CIA.

"Every expert with whom we spoke told us an attack of even greater magnitude is now possible and even probable," Kean said. "We do not have the luxury of time."

All of the roughly 30 Sept. 11 family members who attended the hearing saw the report as a call to action.

"The families know that this is an election year. We're going to hold these people's feet to the fire," said Debra Burlingame, whose brother Charles was the pilot on the hijacked plane that struck the Pentagon.

Coming less than four months before the election, the politically sensitive report could be trouble for Mr. Bush, who has made his handling of terrorism the centerpiece of his campaign and has insisted he fully understood the threat.

Mr. Bush welcomed the panel's recommendations as "very constructive," although his administration has reacted coolly toward the proposal to establish a Cabinet-level national intelligence director. He said that "where government needs to act, we will."

Mr. Bush initially opposed the creation of the commission, resisted the release of some documents and fought against letting national security adviser Condoleezza Rice testify publicly under oath. Still Kean thanked the president for allowing "unprecedented access to documents and cooperation from your administration."

House Speaker Dennis Hastert, R-Ill., expressed doubt that lawmakers would have time to consider sweeping reforms this year. But efforts began in both the House and Senate to build bipartisan coalitions of support for the recommendations.

"I think it is not a matter of whether there will be intelligence reform," national security adviser Condoleezza Rice told the CBS News Early Show. "It's a matter of what reforms will be made and when."

The report portrayed the Sept. 11 terrorists as sure-footed and determined while the nation they were preparing to strike was unprepared, sluggish and uncomprehending of the imminent danger.

The commission identified nine "specific points of vulnerability" in the Sept. 11 plot that might have led to its disruption had the government been better organized and more watchful.

The Sept. 11 commission also concluded that passengers aboard United Airlines Flight 93 fought back against the hijackers but never actually made it into the cockpit.

The assertion, included in the panel's dramatic summary of the harrowing flight, contradicts the firmly held belief by some victims' families that passengers breached the cockpit and fought with hijackers inside during their final moments.

Roughly 90 seconds later, the jet rolled onto its back and crashed into a Pennsylvania field at more than 580 mph killing everyone aboard.

Kean told the press conference that he and the other panel members had agreed to advocate for policy changes even after their mandate ends in a month's time. In a private meeting with the families, asked them to continue to help by pressuring those in government to adopt the recommended changes. Some said publicly that they would.

"If this gets pushed under the rug," he said, holding a copy of the report, "I won't even blame Congress, I'll blame you and me."