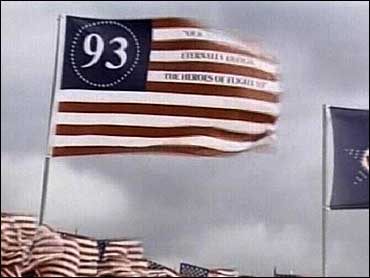 Passengers aboard United Airlines Flight 93 fought back against the hijackers but never actually made it into the cockpit, the Sept. 11 commission concluded.

The assertion, included in the panel's dramatic summary of the harrowing flight, contradicts the firmly held belief by some victims' families that passengers breached the cockpit and fought with hijackers inside during their final moments.

A dispatcher warned pilots to beware any cockpit intrusion, because two aircraft had hit the World Trade Center. The alert, the only one received by any of the hijacked jets, puzzled the pilots, who responded, "Confirm latest message, please."

In phone calls from the plane, four passengers said they and others planned to fight the hijackers after learning of the attacks on the World Trade Center in New York earlier that morning.

With the words "Let's roll," passengers rushed down the airliner's narrow aisle to try to overwhelm the hijackers.

Relying on the cockpit recorder and flight data, the commission said terrorist-pilot Jarrah violently rocked the jet's wings and told another hijacker to block the door. With the sounds of fighting outside the cockpit, Jarrah asked, "Is that it? Shall we finish it off?"

Another hijacker, who wasn't identified, replied, "No, not yet. When they all come, we finish it off."

Jarrah then began pitching the nose of the plane up and down to throw passengers off balance.

Seconds later, a passenger who wasn't identified yelled, "In the cockpit! If we don't, we die!" And 16 seconds afterward, another passenger yelled, "Roll it!" Investigators previously have said they believe passengers tried to use a food cart to break the cockpit door.

Roughly 90 seconds later, the jet rolled onto its back and crashed into a Pennsylvania field at more than 580 mph, killing everyone aboard.

The commission concluded that the hijackers remained at the controls of the plane, "but must have judged that the passengers were only seconds from overcoming them."

The commission's report (.pdf, 7MB)said the hijackers' destination was Washington. It praised the courage of the passengers and said their struggle "saved the lives of countless others, and may have saved either the Capitol or the White House from destruction."

The Associated Press reported last year that the government's theory about Flight 93 — described by FBI Director Robert Mueller to congressional investigators in closed testimony — also concluded that passengers grappled with terrorists but never actually got into the cockpit.