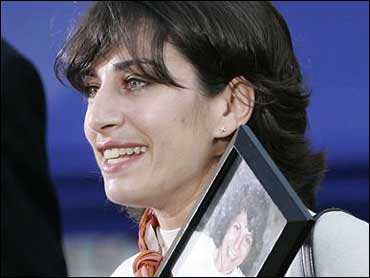 Even though a recent CBS News poll indicates 4 out of 5 Americans are in favor of the new screenings, those publicly supporting them remain quiet.

Now, however, those who have come out vocally in favor of enhanced security screenings go beyond the ranks of government. Carie Lemack, Co-founder of the Families of September 11, said in a statement that ignoring the lessons of what happens if airport security is weak is "the biggest insult to those murdered" on 9/11.

"I feel obligated to implore all those opposing aviation security measures to instead propose alternatives to ensure the safety and security of the flying public," said Lemack, daughter of Judy Larocque, killed on AA11 on September 11, 2001. "Simply complaining about current aviation security tactics is not enough - to deny the evolving threat we face is foolish."

The opponents of the enhanced techniques have a semi-celebrity in John Tyner, who objected to a revealing X-Ray screening and then told a Transportation Security Administration agent about to pat him down, "If you touch my junk, I'll have you arrested." They even have a full blown celebrity in hero pilot Capt. Chesley "Sully" Sullenberger, who called the new X-Rays "unnecessary radiation exposure" for other pilots.

It appears that, for now, Sully may have gotten TSA to pay attention. CNET's Declan McCullagh is reporting that TSA has said it will change the screening policy as it regards pilots, but not the general public.

Although there is much opposition to the enhanced screenings, there are few alternatives to increasing air travel security. TSA chief John Pistole said his agency is developing scanner technology that will not radiate people and will only provide details of "anomalies" on top of stick figures, but that it won't be ready for some time.

In the meantime, Sen. George LeMieux of Florida suggested Pistole and the TSA examine the Israeli model of airport security, which involves behavioral profiling and, while successful, has been criticized as racist.

Still, Pistole said he guessed that if Americans were given the choice between boarding a plane full of people who have gone through the new screening procedures versus one full of people screened the old way, all would go with the former.

Joseph, a Chicago-based transportation expert, told the Associated Press he believes that any of the people who have little tolerance for airport security are the same ones who want the government to work aggressively to prevent terrorist attacks.

"I think Americans, in their hearts, still feel airport security is just a big show - form over substance," Schwieterman said. "So they're impatient with strategies they feel are just there to placate political demands rather the genuine security threats."

Lemack goes on in her statement to say that that attitude is unhealthy and disrespectful.

"The difficult truth is that the threat to commercial aviation continues, and perhaps has grown, since the tragic day more than nine years ago when my mother and nearly 3,000 others lost their lives because those who were in charge of aviation security did not take the threat, nor their obligations to prevent attacks, seriously," Lemack said. "We owe it to our fellow citizens to be realistic about the threat still posed, and the innovative ways we can counter it."