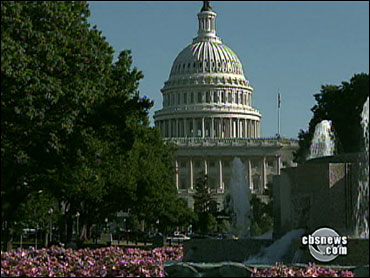 One of the season's most heavily lobbied pieces of legislation in Congress is shining an unwelcome light on eight lawmakers, whose fundraising has caught the attention of ethics investigators.

Acting on a tip, the House Office of Congressional Ethics is conducting a preliminary review, looking for links between political contributions and votes on a massive overhaul of the regulations that govern Wall Street.

The ethics office appears to be focusing on fundraising between Dec. 2, 2009, and Dec. 11, the day the House passed its version of the legislation. The bill, a version of which passed the Senate last month, now is before a House-Senate conference committee.

Six of the eight lawmakers are members of the House Financial Services Committee that initially worked on the legislation. Three of them are now on the conference committee.

All except Crowley and Pomeroy are on the Financial Services panel.

Hensarling spokesman George Rasley said the Office of Congressional Ethics informed Hensarling that a source had claimed the congressman's opposition to the regulatory legislation may have been influenced by political donations before the vote. Rasley said the ethics office did not identify the source. The ethics office gave similar information to other lawmakers, congressional officials said. The officials spoke on condition of anonymity because of the sensitivity of the matter.

The letter to lobbyists sought information on individuals who attended fundraising events and made campaign contributions, along with any related written documents.

The information request, first reported in The Hill newspaper, requested information covering fundraising dating back to January 2009. But the offices of lawmakers told the AP of the December time frame.

The preliminary review determines whether a full investigation will be initiated. However, the Office of Congressional Ethics, run by a board of non-lawmakers, can only recommend actions to the House ethics committee. The ethics committee is composed of House members and decides whether lawmakers violated standards of conduct.

The ethics committee has said in previous cases that the acceptance of contributions from special interests - who want a particular outcome on legislation - does not in itself constitute a rules violation. The violation would occur only if there was evidence that a lawmaker traded a vote in return for a contribution or favor.

The House version of the financial regulation bill passed with no Republican support. Republicans long had objected to the legislation, with none considered fence sitters in the days leading to the final vote. Democrats Watt, Crowley and Pomeroy all voted for the legislation.

"My voting record and opposition to Washington bailouts has been consistent since day one under both the current and previous administrations," Price said in a statement, adding that the ethics office review "is without any merit whatsoever."

Pomeroy spokesman Brenden Timpe said: "The facts here show that Earl actually stood up to the big banks and Wall Street interests and voted for reform legislation that they opposed."

Lucas, Hensarling and Watt are members of the House-Senate panel that is blending the House and Senate versions into one bill.

"This is an informational request and we have complied in full," Lucas spokeswoman Leslie Shedd said.

A spokeswoman for Crowley said the New York Democrat "has always complied with the letter and spirit of all rules regarding fundraising and standards of conduct."

An Associated Press review of Federal Election Commission records for December shows that each of the eight lawmakers received donations from political action committees for financial institutions or their lobbying trade groups. At the same time, however, those institutions also donated to other members of Congress who were not listed in the ethics office letter to lobbyists.

Bank of America's political action committee, for instance, contributed $1,000 each to Price, Watt and Lee on Dec. 1, according to FEC records. But the bank's PAC also contributed a total of $34,500 to other members of Congress, several of them members of the House Financial Services Committee.

A separate review by the Center for Responsive Politics shows that several institutions with an interest in the outcome of the financial regulation bill contributed to the eight lawmakers in December. But no institution shows up giving to all eight.

In addition to Goldman and Bank of America, donors to two or more of the eight lawmakers in the days leading up to the vote included political action committees for the Independent Community Bankers, Morgan Stanley, MasterCard, Massachusetts Mutual Life Insurance and the Property Casualty Insurers Association.