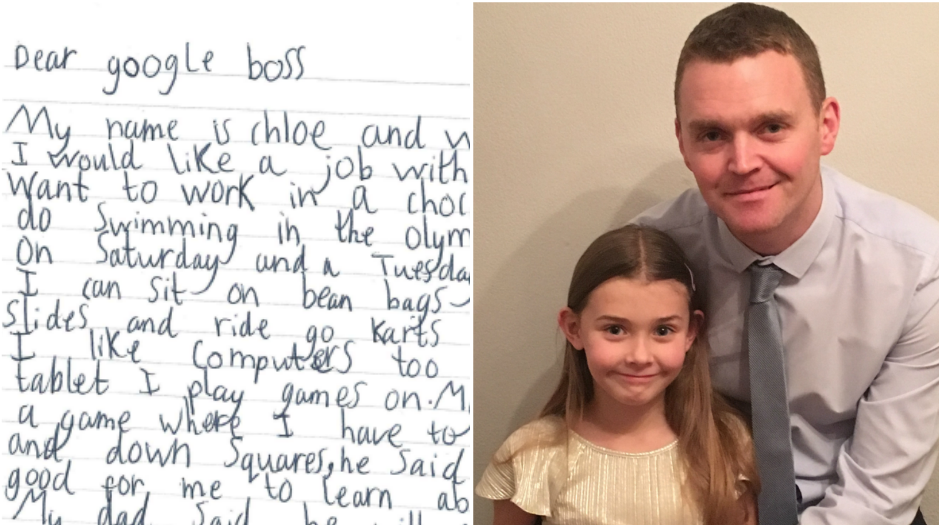 A 7-year-old girl has already made it onto Google CEO Sundar Pichai’s radar by mailing a handwritten “job application” to the executive a few years early.

Chloe Bridgewater from Hereford, England, was talking with her dad about his job one day after school when he mentioned the internet giant.

“She asked what I would love to do, I said, “Well, it’d be cool to work at Google,’” Andy Bridgewater, Chloe’s dad, told CBS News. “She asked why and then I showed her their offices.”

After looking at photos of beanbag chairs, slides and other “cool” things, Chloe decided she, too, would like to work there one day.

“So, I asked if she wanted to apply,” Bridgewater joked.

Chloe unexpectedly agreed, and pulled out a sheet of notebook paper to jot down her ideas.

“Dear Google boss,” Chloe’s letter began. “When I am bigger I would like a job with Google.”

The ambitious 7-year-old also mentioned that she’d like to work in a chocolate factory and swim in the Olympics, but that didn’t deter Pichai from taking her letter seriously.

Four days after Chloe mailed the one-page letter to Google headquarters in late January, Pichai responded with a letter of his own, shocking both the little girl and her dad.

“I am glad you like computers and robots, and hope that you will continue to learn about technology,” Pichai wrote. “I think if you keep working hard and following your dreams, you can accomplish everything you set your mind to — from working at Google to swimming in the Olympics.”

Pichai’s letter to Chloe went viral when her father posted it on LinkedIn Tuesday. Google confirmed the authenticity of the letter to CBS News.

“We didn’t expect the CEO to respond,” Brigewater said. “It means a great deal that someone who must be so busy and have so many important issues to deal with can take time out to respond my 7-year-old daughter, thousand of miles away. What a sign of the type of person he is.”

Bridgewater admits he has no idea if his daughter will apply to Google one day, though Pichai said he was “looking forward” to receiving her job application when she’s finished with school.

“I hope so, but in the end it’s her decision,” the proud dad said.

For now, Chloe’s family just wants to her to concentrate on being a kid. “But when she does show an interest like this, as we have now, we’ll back her all the way,” Bridgewater said.