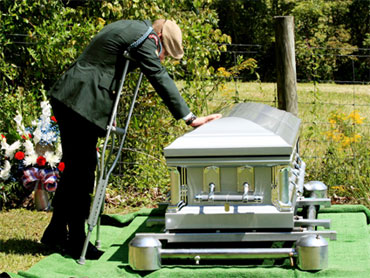 Seven U.S. troops have died in weekend attacks in Afghanistan's embattled southern and eastern regions, while officials found the bodies Sunday of five kidnapped campaign workers for a female candidate in the western province of Herat.

Two servicemen died in bombings Sunday in southern Afghanistan, while two others were killed in a bomb attack in the south on Saturday and three in fighting in the east the same day, NATO said. Their identities and other details were being withheld until relatives could be notified.

The latest deaths bring to 42 the number of American forces who have died this month in Afghanistan after July's high of 66. A total of 62 international forces have died in the country this month, including seven British troops.

Fighting is intensifying with the addition of 30,000 U.S. troops to bring the total number of international forces in Afghanistan to 120,000 - 100,000 of them American. Most of those new troops have been assigned to the southern insurgent strongholds of Helmand and Kandahar provinces where major battles are fought almost daily as part of a gathering drive to push out the Taliban.

The five campaign workers had been snatched Wednesday by armed men who stopped their two-vehicle convoy as it was traveling through remote countryside. Five others traveling in the vehicles had earlier been set free, according to a man who answered the phone at the home of candidate Fawzya Galani and declined to give his name.

No one has claimed responsibility for the killings, although Taliban insurgents have been waging a campaign of murder and intimidation in hopes of sabotaging the Sept. 18 parliamentary polls.

Galani may be a particular target of insurgents because she is one of only a few female candidates for the 249 seats in the lower house.

In a similar attack in Herat, male parliamentary candidate Abdul Manan was shot and killed on Saturday on his way to a mosque by an assassin traveling on the back of a motorcycle.

A number of other candidates and their aides have been killed, injured or threatened around the country.

While streets in the capital Kabul are festooned with campaign posters, many Afghans say they don't plan to vote, either because of safety concerns or cynicism over ineffective government and widespread corruption.

Electoral officials cut the number of nationwide voting sites for the elections by nearly 1,000 to 5,897 because of security concerns.

Meanwhile on Sunday, two suicide bombers attempted to climb over the back wall of a compound housing the governor of the far western province of Farah, but were spotted by guards and shot, provincial police Chief Mohammad Faqir Askir said.

The men's vests exploded, although it wasn't clear if they detonated them themselves or if it was because they were hit by bullets, Askir said.

The explosions blasted a hole in the wall and blew out windows in the compound, but there were no reports of deaths or injuries, he said.

NATO said eight insurgents were killed in joint Afghan-NATO operations Saturday night in the province of Paktiya, including a Taliban commander, Naman, accused of coordinating roadside bomb attacks and the movement of ammunition, supplies and fighters.

Automatic weapons, grenades, magazines and bomb-making material were found in buildings in Zormat district along the mountainous border with Pakistan. Afghan leaders frequently complain that Pakistan is doing to little to prevent cross-border incursions and shut down insurgent safe havens in its territory.

Just south in Khost province, U.S. and Afghan troops raised the death toll among insurgents to more than 30 in simultaneous attacks Saturday by around 50 fighters on Forward Operating Base Salerno and nearby Camp Chapman, where seven CIA employees died in a suicide attack in December.

Insurgents wore replica American uniforms and at least 13 had strapped themselves into suicide bomb vests.

The early morning raids appeared to be part of an insurgent strategy to step up attacks in widely scattered parts of the country as the U.S. focuses its resources on the battle around Kandahar.

The Afghan Defense Ministry said two Afghan soldiers were killed and three wounded in the fighting, although NATO said there had been no deaths among the defenders. Four U.S. troops were wounded, NATO officials said.

U.S. and Afghan officials blamed the attack on the Haqqani network, a Pakistan-based faction of the Taliban with close ties to al Qaeda. In follow-up operations Sunday, a Haqqani commander involved in the attacks and two other insurgents were detained in Khost's Sabari district, NATO said.

NATO also said it launched an airstrike in the northern province of Kunduz on three insurgents, including a commander with the Taliban-allied Islamic Movement of Uzbekistan responsible for recruiting foreign fighters and leading attacks. At least one of the three was killed and another wounded, the alliance said.

NATO has stepped up efforts to provide security to allow an election whose outcome will be generally accepted as credible, hoping that will help stabilize the nation's fractious politics that are helping fuel the violence.

Yet frictions have continued to mar the relationship between the government of President Hamid Karzai and its international partners, largely over the knotty question of endemic official corruption. 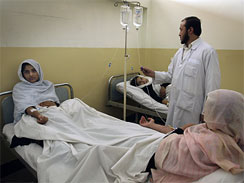 (AP Photo/Ahmad Massoud)
On Saturday, 48 schoolgirls, boys, and teachers were hospitalized in the second case this week of suspected poisoning caused by an unidentified chemical substance.

Most were discharged within hours of becoming ill with nausea, headaches and dizziness at Kabul's Zabihullah Esmati High School. Tests have yet to reveal whether the victims were poisoned. The Taliban, which opposes female education, has been suspected in similar cases.

(Left: Afghan schoolgirls from at Kabul's Zabihullah Esmati High School receive treatment for suspected poisoning, at a hospital in Kabul, Saturday, Aug. 28, 2010. The Taliban, which opposes female education, has been suspected in similar cases.)

NATO also issued a statement saying coalition helicopter pilots were not responsible for the deaths of three Afghan policemen killed Aug. 20 in what had been considered a friendly fire incident in Jowzjan province.

It said the helicopters showed up hours after fighting began, and it was possible the three were killed earlier. All Afghan forces had also been ordered to remain inside compounds at the time the two helicopters fired a missile and 80 30-millimeter rounds at an insurgent firing position, NATO said.

Also Saturday, the government criticized U.S. media reports that numerous Afghan officials had allegedly received payments from the CIA - including one who reportedly took a bribe to block a wide-ranging probe into graft.

A presidential office statement did not address or deny any specific allegations, but called the reports an insult to the government and an attempt to defame people within it.

The statement came the same day as a top graft-battling Afghan prosecutor said he had been forced into retirement.

Deputy Attorney General Fazel Ahmed Faqiryar has complained that the attorney general and others are blocking corruption cases against high-ranking government officials. He said Attorney General Mohammad Ishaq Aloko wrote a retirement letter for him earlier in the week and that Karzai accepted it.