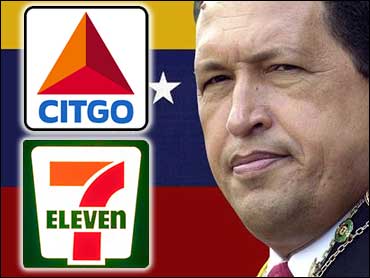 7-Eleven Inc. is dropping Venezuelan-backed Citgo as its gasoline supplier after more than 20 years as part of a previously announced plan by the convenience store operator to launch its own brand of fuel.

7-Eleven officials said Wednesday that the company's decision was partly motivated by politics.

Citgo Petroleum Corp. is a Houston-based subsidiary of Venezuela's state-run oil company, and 7-Eleven is worried that anti-American comments made by Venezuelan President Hugo Chavez might prompt motorists to fill up elsewhere.

Chavez has called President George W. Bush "the devil" and an alcoholic. The U.S. government has warned that Chavez is a destabilizing force in Latin America.

"Regardless of politics, we sympathize with many Americans' concern over derogatory comments about our country and its leadership recently made by Venezuela's president," said 7-Eleven spokeswoman Margaret Chabris.

"Certainly Chavez's position and statements over the past year or so didn't tempt us to stay with Citgo," she added.

Instead, 7-Eleven, which sells gasoline at 2,100 of its 5,300 U.S. stores, will now purchase fuel from several distributors, including Tower Energy Group of Torrance, Calif., Sinclair Oil of Salt Lake City, and Houston-based Frontier Oil Corp.

Chabris said 7-Eleven's decision to sell its own brand was based on many factors, including Citgo's decision this summer to stop supplying stations in parts of Texas and other states to focus on retailers closer to its refineries in Corpus Christi, Lake Charles, La., and Lemont, Ill.

But 7-Eleven had been considering creating its own brand of fuel since at least early last year, and some analysts suggested 7-Eleven may now be hyping the political angle a way to curry favor with U.S. consumers.

"This has nothing to do with Chavez," said Oil Price Information Service director Tom Kloza. "They (7-Eleven) just didn't want to be tied to one supplier."

Kloza said all 7-Eleven did was seek out suppliers who could sell it the cheapest fuel and "that was not Citgo."

Citgo spokesman Fernando Garay declined to comment on whether Chavez's comments had a bearing on 7-Eleven's change in suppliers. He said the break was "a mutual agreement of the two companies."

Garay said 7-Eleven was a "significant" part of Citgo's retail presence in Texas and Florida. "It was a valued relationship," he said.

In July, Citgo decided to stop distributing gasoline to 1,800 independently owned U.S. stations because it was a lackluster segment of its business.

In order to meet service contracts at 13,100 Citgo-branded stations across the United States, Citgo had to purchase 130,000 barrels a day from third parties — a less-profitable business model than selling gasoline directly from its refineries.

Citgo was founded in 1910 as the Cities Service Co., according to the company Web site, and 7-Eleven's predecessor, The Southland Corp., bought Citgo from Occidental Petroleum in 1983.

7-Eleven sold half its interest in Citgo in 1986 and the remaining stake in 1990 to Petroleos de Venezuela SA.