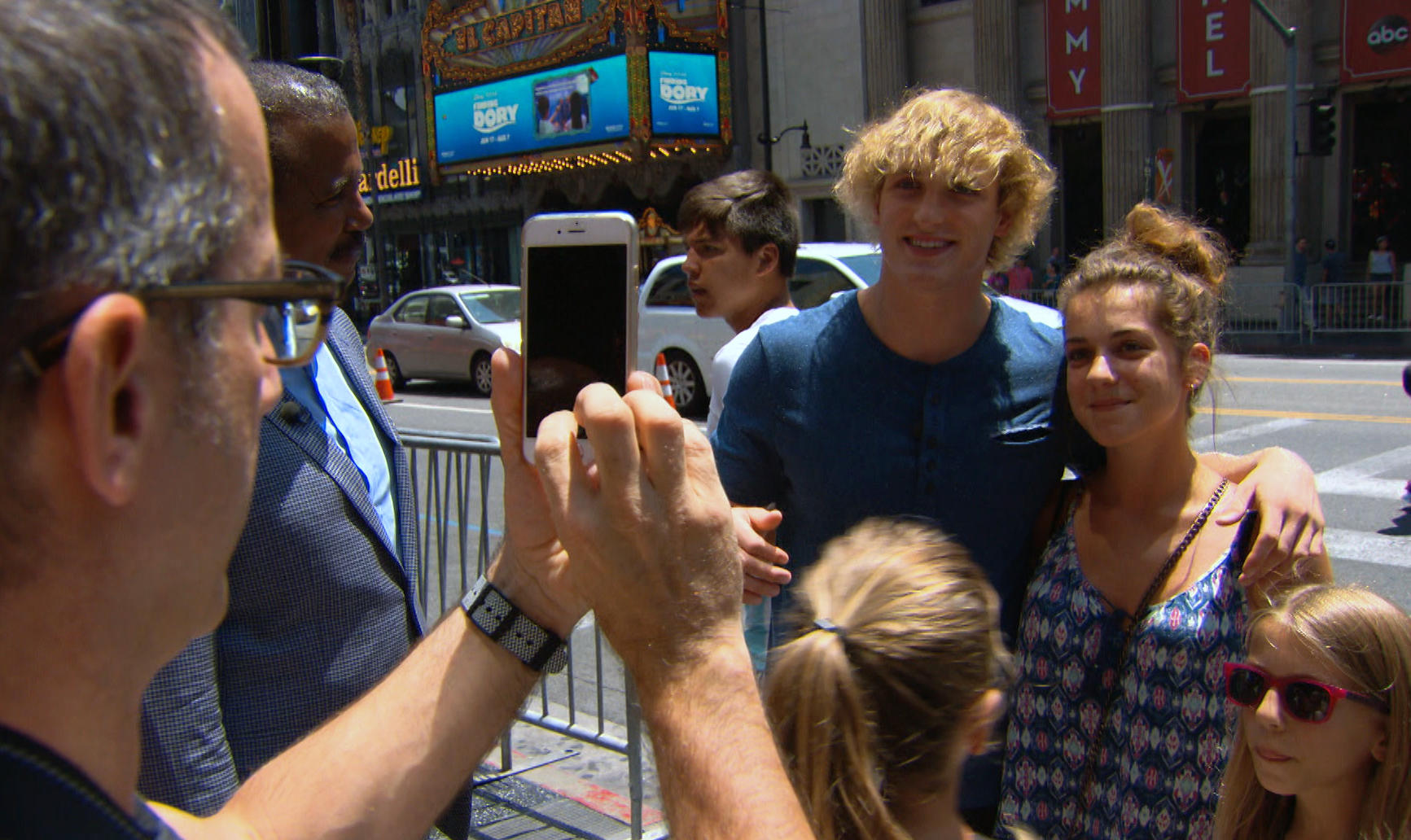 The following script is from “The Influencers” which aired on Oct. 23, 2016. Bill Whitaker is the correspondent. Ira Rosen and Ali Rawaf, producers.

There is a new trend in advertising that might surprise you.  It doesn’t show up in any traditional media.  It’s exploding on mobile devices, set off by young people -- most in their twenties -- who have attracted large numbers of followers on social networks -- platforms like Facebook, Twitter and Snapchat. They’re called social media influencers. And some of them have larger followings than the most popular movies or TV shows.

Major companies are paying them millions of dollars to influence their followers –– and persuade them to buy products.

Tonight, you will hear from some of the biggest social media influencers in the world. Together, they’ve been viewed billions of times.

If you find yourself dumbfounded by the notion that 21-year-old Logan Paul could become a millionaire with goofy online videos like this, then you’re probably not a millennial.

These no-budget, low-quality postings – shot with his cell phone camera – have attracted more than 30 million followers on all his platforms – more than either Donald Trump or Hillary Clinton. They’re drawn to his boyish charm and slapstick humor.

Bill Whitaker: So that’s your shtick?

And he’s turned his shtick into advertising gold.

Promoting products to his online followers. By mining online data, advertisers know he’s reaching their most coveted demographic: young people.  He’s been such a successful pitchman, he was featured on the cover of Ad Week.

Logan Paul: The biggest companies in the world and brands have come to me to help sell their product to the younger generation. And I speak the language of millennials, and they respond to my content.

Bill Whitaker: And they pay you well for this?

“The biggest companies in the world and brands have come to me to help sell their product to the younger generation. And I speak the language of millennials, and they respond to my content.” Logan Paul

He’s now in such demand, he’s earned the freedom to make ads the way he makes his videos – off the cuff.

We watched him making a Dunkin’ Donuts ad in Central Park. All ad-libbed, all his idea and style.

Bill Whitaker: You just make this up on the fly?

Logan Paul: Yeah, if someone has an idea, it’s like “yeah” we just run with it, you know?

When he posted the ad, it was viewed more than seven million times. And Dunkin’ Donuts told us this spot had the same reach as a primetime TV ad. For one day’s work, Logan Paul was paid almost $200,000.

Bill Whitaker: So you’re worth all the money these companies pay you?

Logan Paul: To be honest, I’m worth three times the amount I’m getting paid.

Bill Whitaker: So you’re a bargain?

Logan Paul: I think anyone on the internet with eyeballs at this time and place is a bargain. Because it’s so new, no one really knows what they’re worth.

The more followers an influencer has, the more money they can make. The successful ones are an eclectic bunch, most in their mid-20s who started it just for fun, like Zach King.

Zach King: I kinda call myself a digital magician.

He’s built a following of about 25-million with his video illusions that are easy to binge watch.

Amanda Cerny: I posted my Snapchat video I just shot five minutes ago and now I have 35,000 views.

One of the most successful is Andrew Bachelor, known as King Bach, who has more than 37 million followers.

About half of his following is from one platform called Vine. Videos on Vine are just six seconds long.

Bill Whitaker: What can you do in six seconds?

Andrew Bachelor: I can teach you how to cook something.

Andrew Bachelor: I can, yeah--

Bill Whitaker: You can make me laugh in six seconds?

Andrew Bachelor: I can do it in four.

Bill Whitaker: So, so show me what you do.

Bill Whitaker: Show me how six seconds can make a star.

Bill Whitaker: Does that get a lot of views?

Bill Whitaker: How many?

Advertisers pay Bach just to place their products in his clips. He made a handful of videos wearing a Jimmy Johns logo and earned more than $300,000 from the sandwich maker.

Bill Whitaker: You’re making money off of this?

Andrew Bachelor: I can retire if I wanted to.

Bill Whitaker: Off of six-second videos?

Andrew Bachelor: Yeah. You hate me. That’s a laugh of hate.

Bill Whitaker: I chose the wrong—line of work.

Social media influencers are a small slice of what the advertising industry spends overall on ads, but it was enough to catch the eye of Hollywood.  Paul Cazers is an agent with CAA, one of the biggest talent firms in town.

Bill Whitaker: Do they make too much for what they do?

Paul Cazers: Absolutely not. They’re the new rock stars with a bigger audience than old Hollywood ever had a chance to access. When they take a video or a picture and push a button on their phone, immediately disseminated to millions of people across the planet. That level of access is unprecedented.

Paul Cazers: When Logan does a branded campaign, you can see how many millions of people have watched it, where they’ve watched it, what age they are and their demo. Furthermore, it’s more than just the views. You can see their engagement. You can s-- people are continuing to talk about a video afterwards. And they’re sharing. I don’t know how you could even put a price on that.

Because of the Internet, Logan Paul has a worldwide reach.  We got a glimpse of his star power when we went for a stroll on Hollywood Blvd.

Logan Paul: How are you? What’s your name?

Bill Whitaker: You know who he is in France?

Juliette: You are a superstar in France.

In just 20 minutes, visitors from Kuwait, Israel, Mexico and Sweden also told us they follow Paul.

Logan Paul: I-- like, I don’t even know where that is. I have no idea.

There may be no more recognizable face on social media than Kim Kardashian’s.  She has attracted more than 160 million followers by exposing her life – seemingly minute, by minute – online. This month her visibility became a liability, when thieves in Paris tracked her and robbed her at gunpoint of a reported $10 million in jewelry – jewelry she had shown on Instagram just a few days earlier. The incident is still being investigated, and she hasn’t posted since.  Before the robbery, she told us that being so public is what helped make her so popular and wealthy.

Kim Kardashian West: Yeah, for me, I can handle it.

Kim Kardashian West: Not in this way. I totally attribute my career to social media.

Bill Whittaker: I have read that you have figured out how to monetize just the act of living.

The reality is she’s a savvy business woman, who was one of the first to turn those millions of eyeballs watching her online into millions of dollars. She posts pictures and gets paid for clothes she wears; products she uses, brands she endorses.

Bill Whitaker: We’ve been talking to a number of young influencers. Many of them have different talents. They do comedy, they dance, they sing. What’s your talent?

Kim Kardashian West: It is a talent to have a brand that’s really successful off of getting people to like you for you.

Bill Whitaker: You’ve turned you into an empire worth in excess of $100 million I’ve read.

Kim Kardashian West: So I would think that has to involve some kind of talent, you know?

Gary Vaynerchuk is searching for the next Kim Kardashian. He runs a digital advertising company called VaynerMedia that finds new online talent and connects them with brands.

The day we were there, former wrestler Hulk Hogan was seeking advice on monetizing his social media presence.

Gary Vaynerchuk: As long as you guys find the right cadence; as long as you don’t make it a complete PR piece every episode, you will win.

Bill Whitaker: How do you develop a following?

Gary Vaynerchuk: It starts with are you good enough, are you pretty enough, model, are you funny enough, comedy,

Bill Whitaker: Some “it” factor?

Gary Vaynerchuk: Some “it” factor.”

Gary Vaynerchuk: The person that’s the 18,417th funniest person never, ever had a shot on being on television. Now that same person has the opportunity to make $100,000 a year making skits on Instagram, YouTube, Facebook, and Snapchat and Twitter. That’s--

And that might be why 25,000 people showed up last spring at the online video industry’s annual convention in Anaheim. It’s where teens and 20-somethings come hoping to learn to become the next Kim Kardashian or Logan Paul or perhaps Baby Ariel.  Thirteen-million followers apparently like watching the 15-year-old lip-sync songs on an app called musical.ly.

She pitches candy, she has her own line of lipstick and three bodyguards to hold off her fans.  It might seem crazy, but today some kid with an iPhone and a dream can make more money than earlier generations could have imagined.

Gary Vaynerchuk: During the time of this episode airing, four new influencers popped up, making their first video ever -- maybe 40, maybe 400. So the market is quite wide. It’s just who’s gonna win the depth game and be the best at it.

It’s a worldwide popularity contest conducted minute-by-minute. One sign of just how popular influencers have become: they’ve caught the eye of the Federal Trade Commission, which now requires that influencers make absolutely clear when one of their postings is an ad. The influencers told us government watchdogs are not going to slow business down. Kim Kardashian had a setback when she was robbed but like the other influencers, she’s banking on the future of social media.

Kim Kardashian West: I do believe that the pros in my situation and my lifestyle have been more beneficial than the negative things.

Bill Whitaker:  And the money is not bad.