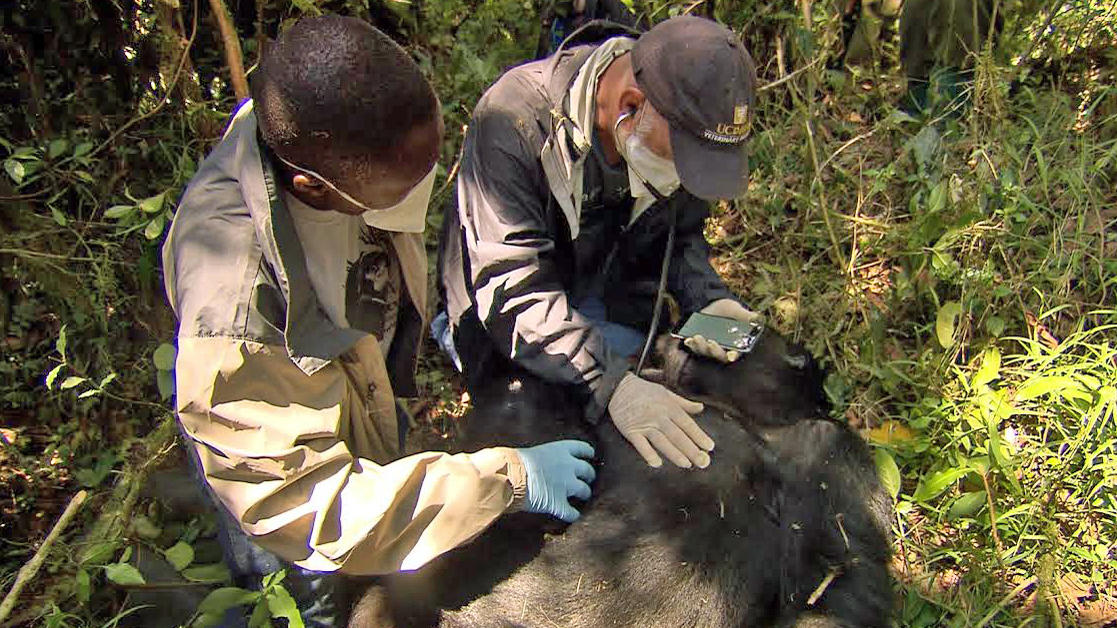 The following script is from “Gorilla Doctors,” which aired on Oct. 9, 2016. Lara Logan is the correspondent. Max McClellan, producer.

There are only about 950 mountain gorillas left on Earth. Habitat loss, poaching, and disease have made them one of the most endangered animals alive. But their numbers are rising, thanks in large part to a group of veterinarians called “Gorilla Doctors.” Their team has 16 doctors who operate all across the gorilla’s territory, a vast rainforest that spans three countries -- Rwanda, Uganda and the DRC, the Democratic Republic of Congo. We went to Africa to meet them, and not long after we arrived, we got see how difficult their job can be. An adult female gorilla in the DRC had caught her wrist in a poacher’s snare.

Mike Cranfield: Have you got a 10cc syringe there?

With the wounded gorilla close by, the Gorilla Doctors prepped their medical gear on the floor of the forest.

Mike Cranfield: Martin, if you could get betadine ready too.

Finding her had not been easy and they didn’t want to lose this chance to treat her.

Mike Cranfield: And then you’re going to use that volume of decametatodomyne. Yes.

Dr. Mike Cranfield has been running Gorilla Doctors for 18 years. Dr. Eddy Kambale is his right hand and Dr. Martin Kabuyaya, one of his newest field veterinarians.

Lara Logan: Mike, what is the plan right now?

Mike Cranfield: So, right now, Eddy is getting the anesthetic ready because it’s a snare we know we’re going to do a knock down, he’ll dart the first chance he has.

Lara Logan: Are you a good shot Eddy?

Eddy grabbed his dart gun that was loaded with anesthetic and went with the trackers to find the wounded female who’d hurt herself when she picked up a snare poachers had set for a smaller animal.

They had to cut a path through the forest as they went. She was with her group and they were moving fast.

Thick vegetation gave way to a clearing where they spotted her. Then Eddy stepped forward and prepared to take his shot as soon as it hit she took off. And the team followed. They knew she had to be close.

It was an unforgettable sight. Now, they had less than 40 minutes to assess her wound and treat it before the anesthetic wore off.  They call this an intervention.

Mike Cranfield: Eddy and I and Martin have done probably 15 interventions together. It’s the team, it’s always the team and we have some of the most important patients in the world right?  If something doesn’t go right, basically you can almost count on it being known almost worldwide.

Lara Logan:  How would you rate the quality of your work as an organization?

When they’re not doing emergency interventions, Mike said his doctors are out making “house calls.”  And in the 10 days we spent with them, we went on a few. This one in the DRC where Eddy and Martin are based.

Lara Logan: All the signs are normal.

Eddy Kambale: I can count the breathing rate like now you see -- one, you can see how the abdomen is moving, two, three.

These gorillas live in Virunga, the oldest national park in Africa and from the air, some of the most forbidding landscape you’ll ever see. When the Gorilla Doctors began working here, the mountain gorillas were almost extinct. Today, they’re the only population of great apes that’s growing.

Mike Cranfield: They’re increasing at four percent a year, which is about the maximum that they could.  That’s as fast as the human population is growing on the face of the earth. And that’s veterinarians are credited with 50 percent of that growth or two percent a year.

Lara Logan: You’re talking about Gorilla Doctors, your veterinarians and you.

Mike Cranfield: Yes, yes, we’re the only veterinarians that are working on the gorillas in a clinical sense.

Over the years, Mike told us, he’s had a few run-ins with his patients.

Mike Cranfield: He came flying towards me for about 30 yards and just punched me right in the face.

Lara Logan: Did it hurt?

This is Umoja. Mike calls her “a miracle baby.” Part of her intestines were hanging out of her body when the Gorilla Doctors got to her.

Now, eight years later, Mike wanted us to meet her, which meant hiking through a bamboo forest, layers of vegetation, and up to more than 9,000 feet.

There on the steep volcanic slopes in northern Rwanda, we found Umoja’s family. And here she is. A new mother. Her baby boy, only a month old.

Mike Cranfield: Umoja is probably the most spectacular case that we’ve ever had. And that brought a lot of pride for Gorilla Doctors.

Lara Logan: So it’s not just the animal that you save, it’s the future generations.

In Rwanda, where we met one of Mike’s senior veterinarians, Dr. Sosco, the mountain gorillas have become a national symbol. He was 14 when his country was torn apart by genocide in 1994. More than 800,000 people were slaughtered in 100 days.

Lara Logan: What do you remember of the genocide?

In 22 years, Rwanda has risen from the ashes and the gorillas are at the center of that transformation. Close to 30,000 tourists come every year for the gorillas and tourism is the biggest source of foreign income for this tiny nation.

Noheli Jean Bosco: The connection makes everybody feel “OK, these guys are very important to us..”

Lara Logan: These gorillas are important.

Noheli Jean Bosco: These gorillas they’re important to us.  Everyone feels that.

Mike, who works with the UC Davis Wildlife Health Center, was at the Gorilla Doctors headquarters in Rwanda, when he got the call about that wounded gorilla in the DRC.

[Mike Cranfield on phone: Oh dear, and how long has the snare been on?]

Before long, we were rushing for the border.

Lara Logan: From the moment you get that phone call, is there a pressure to move as fast as you can?

Mike Cranfield: Yea, speed.  Speed is everything. Twenty-four hours can make a difference to having full function in the hand.

Mike Cranfield: It is.

Lara Logan: Speed matters. But to get there, ya have to take the slow boat.

Dr. Eddy Kambale was waiting for us at the slow boat on the other side of the border, on the shores of Lake Kivu. Amidst the crowd and the chaos and struggling to hold onto our gear, we boarded with minutes to spare. And settled in for the long journey, a 12-hour odyssey across one of Africa’s great lakes. We woke as the sun was rising, and pulled into the harbor at Bukavu, with the hustle and bustle of the early morning.

Lara Logan: And then we still had to get to the animal.

A bumpy ride and a broken bridge took us to the edge of the Kahuzi Biega National Park. From here, we went on foot, hiking deep into one of largest forests in the DRC. Every time we went down, we had to come back up and the hills were steep. We walked and walked with no sign of the gorillas, stumbling and falling into the night.

Martin Kabuyaya: It’s not easy to find the trail at night.

Lara Logan: Was hard walking in the dark?

Lara Logan: Even for you?

Eddy Kambale: That was not normal.  It was really hard.

With worn feet and low expectations we tried again the next day. This time the trackers got lucky and led us right to them. That’s when Eddy darted her and she ran into the forest.

From that moment, when she was in the hands of her doctors, there was a sense of urgency. The first thing Mike did was check her breathing and heart rate, to make sure she was tolerating the anesthesia.

Eddy’s job was her injured wrist. He had to cut away her hair to get to the wound. The snare was dug in, her flesh infected.

Lara Logan: What did you give her, Mike?

Mike Cranfield: Painkiller. About to give the antibiotic.

That’s her snoring. Mike said she was in a deep sleep and couldn’t feel anything. From her worn teeth, they estimated she was at least 20.  She’s an eastern lowland gorilla - not a mountain gorilla - but also critically endangered. Eddy used wire cutters and removed the snare.

Eddy Kambale: Yea it’s very deep.  And you can see how deep it it.

Lara Logan: So it won’t need to be amputated?

Mike Cranfield: No, this is gonna be a perfect scenario. Very, very pleased.

Martin was gathering samples while they worked. They study these and share them with scientists all over the world.

Mike Cranfield: I’m gonna put the blood in a tube.

Eddy cleaned the wound, tested the movement in her hand, and decided she didn’t need stitches, while Mike did a physical exam.

Mike Cranfield: OK, she’s starting to wake up. OK, so we need to move back a bit. OK, she’s going to have to have a reversal..

Mike Cranfield: OK, everybody back up everybody! That’s a little faster than we like.

The doctors won’t leave her until they know she’s OK.

Mike Cranfield: You can see the respiration has picked up. And as long as we don’t stimulate her, she’ll probably stay that way and that’s the way we would like her to stay until the ketamine’s worn off a bit.

For the next 15 minutes she struggled as the drugs wore off. Her wrist, they said, would now heal on its own, and they’d be back to check on her.

Eddy made sure she headed for her group until, not far from her, he saw the group’s leader, a silverback, in the grass. Instinctively, she moved towards him and disappeared into the forest.