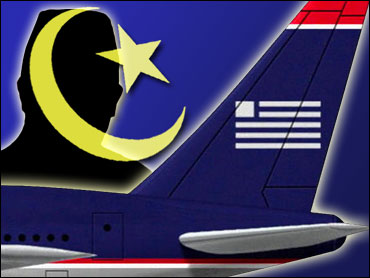 Six Muslim imams were removed from a US Airways flight at Minneapolis-St. Paul International Airport and questioned by police for several hours before being released, a leader of the group said.

The six were among passengers who boarded Flight 300, bound for Phoenix, around 6:30 p.m. Monday, airport spokesman Pat Hogan said.

A passenger initially raised concerns about the group through a note passed to a flight attendant, according to Andrea Rader, a spokeswoman for US Airways. She said police were called after the captain and airport security workers asked the men to leave the plane and the men refused.

"They took us off the plane, humiliated us in a very disrespectful way," said Omar Shahin, of Phoenix.

The six Muslim scholars were returning from a conference in Minneapolis of the North American Imams Federation, said Shahin, president of the group. Five of them were from the Phoenix-Tempe area, while one was from Bakersfield, California, he said.

Three of them stood and said their normal evening prayers together on the plane, as 1.7 billion Muslims around the world do every day, Shahin said. He attributed any concerns by passengers or crew to ignorance about Islam.

"I never felt bad in my life like that," he said. "I never. Six imams. Six leaders in this country. Six scholars in handcuffs. It's terrible."

Ibrahim Hooper, spokesman for the Washington-based Council on American-Islamic Relations, expressed anger at the detentions.

"CAIR will be filing a complaint with relevant authorities in the morning over the treatment of the imams to determine whether the incident was caused by anti-Muslim hysteria by the passengers and/or the airline crew," Hooper said. "Because, unfortunately, this is a growing problem of singling out Muslims or people perceived to be Muslims at airports, and it's one that we've been addressing for some time."

Hooper said the meeting drew about 150 imams from all over the country, and that those attending included U.S. Rep.-elect Keith Ellison, a Democrat of Minneapolis, who just became the first Muslim elected to Congress. Shahin said they went as far as notifying police and the FBI about their meeting in advance.

Shahin expressed frustration that - despite extensive efforts by him and other Muslim leaders since even before the Sept. 11, 2001, terrorist attacks - so many Americans know so little about Islam.

"If up to now they don't know about prayers, this is a real problem," he said.

Reached by cell phone just after his release, Shahin said he did not know where they would spend the night or how they would try to get back to Phoenix on Tuesday. Hooper said US Airways refused to put the men on another flight.

The other passengers on the flight, which was carrying 141 passengers and five crew members, were re-screened for boarding, Rader said. The plane took off about three hours after the men were removed from the flight.