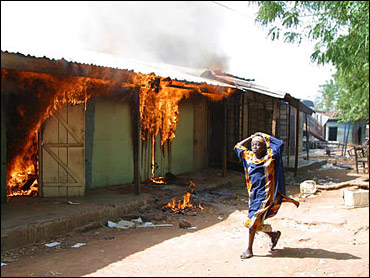 He was leading a Nigerian Red Cross team visiting the Hausa-speaking Muslim town of Yelwa on Thursday following raids on Sunday and Tuesday by fighters from the largely Christian Tarok tribe.

One hundred people were reported missing following the attacks, many of them women and children allegedly abducted by the attackers, Mairga added.

"We have done what we could do" to treat 58 injured residents still in the town, he said. At least 100 other wounded civilians were evacuated along with thousands of others whose homes were destroyed, other Red Cross officials said.

On Wednesday, residents showed an Associated Press reporter a 160-square-foot area of freshly upturned soil behind a mosque in a field smelling of rotting flesh, explaining it was the burial site for 280 people killed in the raids by mainly Christian, ethnic Tarok militants.

Although just one charred corpse was visible on the main street Thursday, there were "so many dead bodies" interred after the two attacks, Haruna said late Wednesday. "I cannot say how many."

Red Cross workers on Thursday tended to the wounded and tallied the dead in the trading town dominated by Hausa-speaking Muslims, Red Cross' Nigerian president Emmanuel Ijewere said, stressing only 80 were confirmed killed so far.

The killings are part of a cycle of conflict along ethnic and religious lines rocking Nigeria's central region since an outburst in September 2001 pitted Christians against Muslims in the once-peaceful city of Jos. Over 1,000 people died in one week then. Many more have been killed since, including hundreds since January this year.

Few parts of Yelwa, a town of cattle herdsman and semi-nomadic traders, were left untouched in the latest raids by assailants who used kerosene to burn several mosques and hundreds, possibly thousands of homes and vehicles. One corpse was still visible on the street Wednesday.

Ambrose Nanlong, a 68-year-old community leader in the nearby town of Shendam — dominated by Tarok-speaking Christians — said some "Christian boys" from Shendam and nearby Kawo took part in the attack on Yelwa to avenge what he said had been a raid by Muslim militants on Kawo earlier in the day.

The Kawo attack could not be independently confirmed and the road to the village was blocked by makeshift barricades of fallen trees.

In February, Muslim militants in Yelwa were blamed for killing nearly 50 people, many of them Christians who took refuge in a church.

"Yelwa has been a thorn in the flesh of Shendam for a very long time," Nanlong said, arguing the decision by Christians to take up arms was in "self-defense."

Twenty-five young Tarok men with bullet and machete wounds were taken to a hospital in the nearby town of Shendam, the hospital superintendent Samuel Audu told The Associated Press.