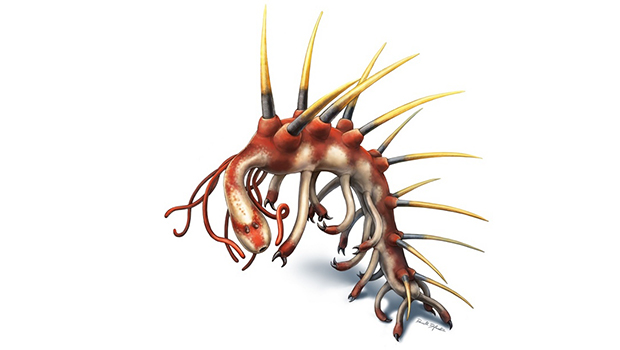 Heads or tails? Scientists finally have an answer in the case of the odd ancient worm Hallucigenia, which leaves fossils so bizarre that researchers once thought its top was its bottom and its back was its front.

Indeed, after decades, researchers have confirmed which side of Hallucigenia was the head, and found its circular "grinning" mouth lined with teeth, according to a new study detailed today (June 24) in the journal Nature. This toothy ring may be the link that connects creatures as diverse as spiders, nematode worms and teeny-tiny tardigrades -- the cute and nearly indestructible micro animals also known as water bears.

"You look at a spider today, and you would have no idea," said study co-author Martin Smith, a researcher of paleontology and evolution at the University of Cambridge. "But actually, its simple mouth used to be much more complicated."

Hallucigenia were tiny marine worms -- commonly just 15 millimeters in length -- that lived in the Cambrian period, when complex, multicellular life was starting to populate the Earth. Spiky Hallucigenia fossils were first discovered in the 1970s, and these specimens revealed a long, wormy body with spines on top and 10 pairs of spindly legs down below. But because one of each pair of legs was hidden in the rock, the first descriptions of the animal mistook its spines for its legs and its legs for its spines, Smith said. [See Images of the Hallucigenia Worm & Other Cambrian Creatures]

Eventually, researchers righted the reconstruction of these worms, but they still couldn't make heads or tails of their heads and tails. New fossils from the Burgess Shale in Canada -- one of the best fossil sites on Earth -- paired with advanced microscopic techniques, allowed Smith and his colleague Jean-Bernard Caron of the University of Toronto to take a second look.

25 cubicles cooler than yours

Cat videos may be good for your health

"It seemed like it was about time that we went back and had a sort of fundamental rethink of the animal from the ground up," Smith told Live Science.

The team studied hundreds of fossils of Hallucigenia sparsa, which lived 508 million years ago. Their first discovery was that a large, orblike blob often identified as the head in these fossils was not a head at all. In fact, it wasn't even part of the body. Most likely, these orbs are the remnants of fluids produced during decay squeezed out of the body during burial, Smith said.

The head, it turns out, is at the other end. The researchers used a micro-engraving tool to chip away at the shale, uncovering the heads of several dozen specimens. Then, they popped the fossils under a microscope, hoping to find eyes.

"We saw not just a pair of eyes looking back at us, but underneath was this marvelous grin," Smith said.

For the first time, they had discovered H. sparsa's mouth. And it was a doozy: a circular opening lined with teeth. The inside of the mouth and throat was lined with more needlelike teeth pointed toward the gut; these probably kept food headed in the right direction, Smith said.

The ring of teeth hints at a mystery that's long plagued the group Ecdysozoa, of which Hallucigenia was an early member. This group contains two subgroups -- the panarthropods (which include insects, spiders and other arthropods, as well as tardigrades and the weird clawed velvet worms) -- and the cycloneuralian worms (which include nematodes, mud-dwelling Loricifera and phallus-shaped "penis worms"). Though these animals are genetically related, they don't seem very alike other than that they all molt, Smith said. [Deep-Sea Creepy-Crawlies: Images of Acorn Worms]

Some ecdysozoans, like tardigrades, have "O"-shaped mouths encircled in teeth; others, like spiders, don't. The diversity means either these circular, toothed mouths evolved multiple times in the group, or that the common ancestor of all ecdysozoans had such a mouth and that some descendants later evolved to lose this feature.

Hallucigenia's tooth-lined mouth suggests that it sucked down its food "like a plunger," Smith said, but what that food was remains a mystery. It's possible the worm's tentaclelike front limbs were used to comb tiny particles out of the water, making it a filter feeder. Or perhaps its spindly legs wrapped around sponges, letting the worm latch on and hoover up bits of sponge as a snack.

Whatever the ecology of this bizarre animal, the new fossils should help researchers delve back even farther in the family tree. Now, they know what they're looking for, Smith said.

"I think revisiting those worms and looking back in detail about how their mouths are organized could tell us exciting new things about how the molting animals as a whole have evolved," he said.