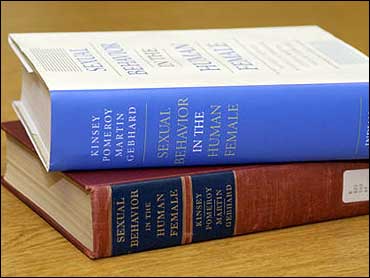 In 1944, Alice Ginott Cohn joined thousands of women who openly discussed a subject most others only whispered about: sex.

The result of those private interviews was Alfred Kinsey's landmark book "Sexual Behavior in the Human Female," which shocked the world in 1953 with its explicit revelations. Countries banned it. Churches berated it. Some scholars scoffed.

Indiana University, which fostered the research, marks the book's 50th anniversary in 2003 with a yearlong series of art exhibitions, film festivals and lectures exploring women's health and sexuality, the arts, science and history.

Mostly, though, the school celebrates how the times and women have changed, as well as Kinsey's pivotal role in bringing attention to women.

"He was courageous. He should be commended for his contributions," said Ginott Cohn, now 78, of New York City. "It was such a unique experience. I felt so in the forefront on research."

The book came five years after Kinsey published a book on male sexuality that created a stir of its own. But if the first book sparked a flame of controversy, the second book ignited an inferno.

"It meant that sex research did not move into the mainstream of academic credibility. People took their reputations in their hands if they attempted to pursue it," said Edward Laumann, sociology professor at the University of Chicago. "The Kinsey report was a cultural event of enormous consequence."

Kinsey was a zoologist studying gall wasps when he was asked to teach a course on marriage. He turned his studies to human sexuality only after finding little research on the subject.

His 842-page book on women's sexuality was a statistical piece of work that included graphs and tables, but it was an instant success, selling 270,000 copies in less than a month.

"It was very dry research, but it was just so titillating that people were constantly trying to get ahold of it," Laumann said.

For both books, Kinsey was criticized for relying almost entirely on volunteers for his interviews, which some scholars said did not provide a representative sample of the population.

Kinsey's research focused on the biology of sex and lacked psychological and clinical information and analysis, Laumann said.

The U.S. Army in Europe banned the book from is library shelves. South African customs officials prohibited bookshops from selling it without permission. Priests admonished parishioners in the Owensboro, Ky., Catholic Diocese against reading the book or its reviews.

Shortly after the female book was published, the Rockefeller Foundation, under pressure from Congress, cut off the funding for Kinsey's research.

Kinsey died in 1956, derided by some and praised by others.

"He is regarded as the scapegoat, the Antichrist, for the moral decline in America over the last 50 years, which of course is ridiculous," said John Bancroft, director of Indiana University's now-named Kinsey Institute for Research in Sex, Gender and Reproduction.

Kinsey made some mistakes with his methodology, Bancroft acknowledged, but the research was important because it was the first of its kind and remains one of the largest collections of data on sexual behavior.

"He was documenting early signs of the lifting of repression of women's sexuality," Bancroft said.

Kinsey questioned virgins for an hour about their sexual experiences. Those women who had had sex remained for a second hour - a point that didn't go unnoticed by some men on campus who loitered to learn which women stayed the longest.

For feminist Gloria Steinem, who will speak at the university in February about the changing face of women's sexuality, what is most worth celebrating is Kinsey's inclusion of women in his research at all.

"As we still see in health trials and official research, women and even female rats are frequently excluded," she said. "It was far from perfect, but it was a big step forward."

"The Kinsey report is a little like the Bill of Rights. It only is powerful if we use it," Steinem said. "If it exists only on paper, then it has little importance. It depends on what is done with it now."

Jimmy Buffett postpones tour dates for the rest of the year, citing health issues
Thanks for reading CBS NEWS.
Create your free account or log in
for more features.
View CBS News In
CBS News App Open
Chrome Safari Continue
Be the first to know
Get browser notifications for breaking news, live events, and exclusive reporting.