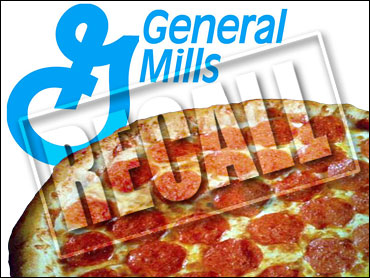 General Mills on Thursday recalled about 5 million frozen pizzas sold nationwide under the Totino's and Jeno's labels because of possible E. coli contamination.

The problem may have come from pepperoni on pizzas produced at a General Mills plant in Ohio, the suburban Minneapolis-based company said. It said the pepperoni itself came from a separate supplier, not produced at the plant itself, but it declined to release the name of the pepperoni distributor.

The voluntary recall covers pizzas containing pepperoni that have been produced since July, when the first of 21 E. coli illnesses under investigation by state and federal authorities emerged.

Nine of the 21 people reported eating Totino's or Jeno's pizza with pepperoni topping at some point before becoming ill. The Centers for Disease Control and Prevention said that eight of the victims have been hospitalized, and four have developed a type of kidney failure.

Eight of the cases were reported in Tennessee, with the other cases found in smaller numbers in Kentucky, Missouri, New York, Virginia, Ohio, Pennsylvania, Illinois, Wisconsin and South Dakota.

The recall affects approximately 414,000 cases of pizza products currently in stores and all similar pizza products in consumers' freezers, according to the General Mills website.

General Mills said it is cooperating fully with the investigation, which is continuing. The company said it is not naming the pepperoni supplier because the source of the E. coli is still under investigation.

The company asks consumers to throw away recalled pizzas. They can get replacements by clipping the bar code from the box and mailing it with their name and address to Totino's/Jeno's, P.O. Box 200 - Pizza, Minneapolis, MN 55440-0200.

Symptoms of E. coli can include stomach cramps and diarrhea. People typically are ill for two to five days but can develop complications including kidney failure.

In late September, the Topps Meat Co. recalled 21.7 million pounds of frozen hamburger patties after 40 people in eight states got sick from contaminated beef believed to have been imported from Canada. The New Jersey-based company shut down several days later.

The specific products in the recall, with SKU, include: