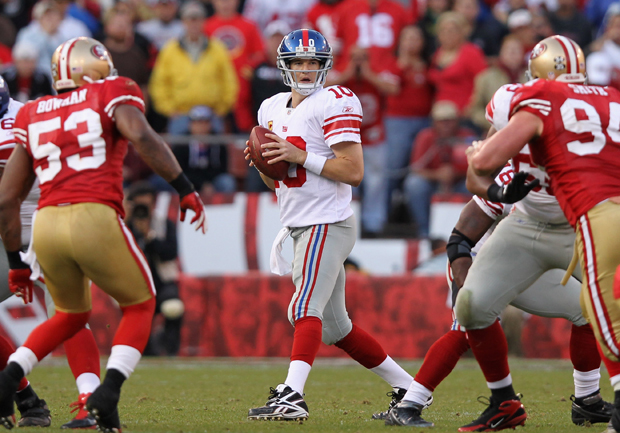 SAN FRANCISCO - The Giants boasted a physical, intimidating defense with athletic linebackers and stout linemen capable of stifling the NFL's most productive offenses. San Francisco featured a high-powered passing attack led by an eventual Hall of Fame quarterback in his prime with receivers capable of turning short passes into big gains.

When the San Francisco 49ers host the New York Giants in the NFC championship game Sunday for a shot at the Super Bowl, the matchup conjures memories from a previous era of this great rivalry — even if the roles are somewhat reversed.

The elite quarterback now is New York's Eli Manning, who connects on big plays to Hakeem Nicks and Victor Cruz in a similar fashion to how Joe Montana and Jerry Rice did for the dominant Niners in the 1980s.

And who could have predicted this surprising pairing?

The Giants (11-7) toppled defending champion Green Bay 37-20 last Sunday when everybody figured the road to the Super Bowl would go through Lambeau Field. Instead, New York is traveling West to San Francisco to face the upstart 49ers (14-3) in a meeting of franchises with so many fresh faces on the big stage.

NFC championship: Who has edge, 49ers or Giants?

Jim Harbaugh's "mighty men" as he calls them stunned Drew Brees and the favored Saints 36-32 when Alex Smith hit Vernon Davis for the game-winning 14-yard touchdown with 9 seconds remaining.

"Look at last week, I think everybody thought the road was going to go through Lambeau. I think everybody assumed the NFC championship game was going to get played there and look what happens," Smith said. "These teams at this point, everybody's as good as each other and it's all going to come down to how you execute on that day. We're all capable of beating each other, that's for sure."

Smith and Manning each orchestrated five fourth-quarter comebacks during the regular season, yet Manning missed in a 27-20 loss at San Francisco on Nov. 13 when Justin Smith batted away his last-ditch pass attempt on fourth down in the waning moments.

"This is about the NFC championship. It's an opportunity to get this win and go on to the Super Bowl," Manning said. "We played them once before. We know they're a good team. There's no denying that. They're playing great football. They're playing with great confidence. It's going to be exciting going out there and having another shot and seeing what we can do."

Niners long snapper Brian Jennings is the only one left on either side from San Francisco's last trip to the playoffs in January 2003, when the 49ers rallied for a stunning 39-38 comeback victory against the Giants at Candlestick Park. San Francisco also had beaten New York during the regular season that year.

It's sold out for Sunday's game with rain in the forecast as the 49ers look for their first trip to the NFC title game since the 1997 season.

CBSSports.com's Clark Judge says that the weather may be the story of the game.

"The forecast calls for showers Friday, Saturday and Sunday, and when you play on a surface that's below sea level that's a problem," Judge says. "If there are turnovers, of course, expect the 49ers to force them."

Former 49ers owner Eddie DeBartolo Jr. will serve as honorary captain after team president and nephew, Jed York, called him immediately after beating the Saints with the thoughtful invite.

Fittingly, DeBartolo owned the team from 1977-98, when the 49ers won five Super Bowls. He was affectionately known as "Mr. D" to his players and coaches.

The only other time these two franchises faced off in the conference championship the game finished in memorable fashion. On Jan. 20, 1991, Roger Craig fumbled with the 49ers leading 13-12 late in the fourth quarter and the Giants went on to win 15-13 to deny San Francisco a chance at a third straight Super Bowl title. New York then beat the Bills to capture its second Super Bowl.

These teams met six times in the playoffs between the 1981 and `94 seasons with the winner going on to win the Super Bowl four times.

There shouldn't be too many elements of surprise Sunday considering how recently they last played, though Harbaugh is always good for a few tricks.

"That first game has nothing to do with what happens Sunday night," Giants safety Antrel Rolle said.

Davis had a career day against New Orleans with seven catches for 180 yards — the most yards receiving by a tight end in a playoff game — so the Giants certainly will try to neutralize him and put constant pressure on a never-more-confident Smith.

Harbaugh has used the phrase "don't overcook it" with is players as a reference to sticking with what got them this far in a remarkable turnaround season.

"Burnt meat, stale bread doesn't taste real good," Harbaugh said. "Like to get it just right. Not undercooked, not overcooked."

In that November game, the 49ers won their seventh straight and did so without relying on star running back Frank Gore, whose franchise-record streak of five straight games with 100 yards rushing ended with a knee injury and his first career game with zero yards.

Forget about it. He's ready to roll this weekend.

"He makes a big difference and there is not a question about that," Giants coach Tom Coughlin said. "If you look at the way he is utilized and how much they put on the runners when they come in, how much emphasis they put on the run game, he is certainly someone you must pay attention to."

New York is riding its own impressive roll.

Manning threw for 330 yards and three touchdowns against the Packers as the surging Giants won their fourth straight game. He'd love to win another Super Bowl ring to go with the one he has for the 2007 season.

"The Giants, we saw them earlier in the season and they're playing at a much higher level, especially these last four or five games they've played, done an outstanding job, and we are too, you know?" San Francisco left tackle Joe Staley said. "I think we're a different team than we were earlier in the season, playing a lot better, with a lot more confidence."

In fact, the 49ers have already more than exceeded expectations for Harbaugh's first season. They won the NFC West to end an eight-year playoff drought and the same stretch without a winning record. On top of that, they earned the NFC's No. 2 seed and home-field advantage. That proved huge in eliminating New Orleans.

"Nobody really gave us an opportunity to be in this position, nobody gave us an opportunity to beat the Saints. Nobody thought we would," said safety Donte Whitner. "Now we're sitting here with a home game, home-field advantage, you have the Giants traveling here and if you win you go to the Super Bowl. It's hard not to think about that. I would be lying if I said we weren't thinking that one win gets us in."