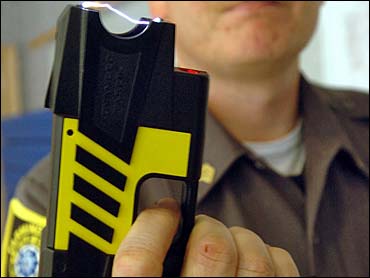 (AP)
MIAMI (AP) More than 40 children shocked with stun guns while visiting prisons in April may not have been the first ones zapped, according to a report released Tuesday.

A corrections officer told investigators she saw a similar demonstration at a prison about five years ago.

The report included hundreds of pages of documents gathered during probes ordered after the Department of Corrections learned children ages 5 to 17 had been shocked at three Florida prisons on April 23, "Take Our Daughters and Sons to Work Day." Three employees were fired and two resigned. More than a dozen others were disciplined.

No children were seriously hurt or taken to hospitals. At one prison, those who had been shocked were told they could be first to get hot dogs and hamburgers for lunch, according to the report. Some asked to be shocked and laughed afterward.

Some children were shocked individually while others were part of a circle where children and officers held hands so the shock would be passed around.

Despite an officer's recollection of a similar demonstration in 2003 or 2004 at a Florida Panhandle prison, this year was the first time anyone reported one, spokeswoman Gretl Plessinger said.

Officials learned about one demonstration from a parent, then held a conference call to find out if there had been others. Plessinger said children may have been shocked in past years, but the department is taking steps to ensure it does not happen again.

The department cannot investigate the earlier demonstration mentioned in the report because the officer could not remember exactly when it happened or who was involved.

The report also confirmed what officials had said earlier — that some children's parents were asked for permission but others were not. Department of Corrections Secretary Walter McNeil has said previously that even though some parents had given permission that did not excuse officers.

The documents released Tuesday included a resignation letter from Lt. P.J. Weisner, who was involved in one of the demonstrations.

"The exercise that I participated in has been a common practice. At no time did I believe that any of the students were in any risk," wrote Weisner, who had been with the department for 11 years. "It is a shame that since this has become a media event, state employees would attempt to obtain some sort of fame at the detriment of their co-workers."

Unlike a Taser, which shoots a probe that delivers a shock, the devices used at the prisons were stun guns, which work when touched to a person's skin and affect a smaller area of the body. The result is two temporary marks that look like mosquito bites. The marks may later turn into bruises about the width of a pencil eraser.

The Department of Corrections also investigated a demonstration the same day where children were accidentally exposed to the tear gas when the wind shifted, but none required medical care.

The Florida Department of Corrections runs more than 130 prisons that hold more than 100,000 inmates.