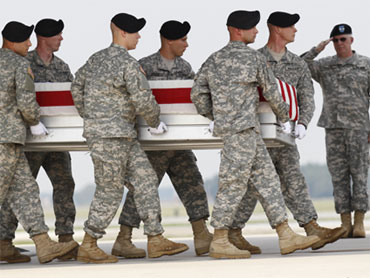 Four U.S. troops were killed in fighting in eastern and southern Afghanistan on Sunday, and a former guerrilla leader who battled Soviet invaders decades ago was killed by a roadside bomb in the country's north.

Three of the U.S. casualties died in insurgent attacks and one was killed by a homemade bomb, NATO said.

The deaths bring the number of international forces killed in Afghanistan this month to 42, including 28 Americans, according to a count by The Associated Press. Sixty-six American troops were killed in July, making it the deadliest month for U.S. forces in Afghanistan since the 2001 invasion.

In the country's north, insurgents using a bomb detonated by remote control destroyed the vehicle in which former guerrilla commander Salaam Pahlawan was traveling as he made his way Saturday to government offices in Faryab province's Al Mar district, said provincial police commander Khalil Andarbi.

He said Pahlawan had been commander of anti-Soviet forces in the district but had lately been serving in an advisory role as a tribal elder. Many surviving veterans of the 1979-1989 Soviet invasion have been targeted by the Taliban for allying themselves with the government in Kabul.

The attack appeared to be part of a campaign of terror and intimidation being waged by the Taliban in hopes of sabotaging the Sept. 18 elections.

President Obama has beefed up troop strength here to 93,000 to try to defeat the Taliban, but many foreign policy experts believe the only way to end the war is by negotiating with the very insurgency Afghan and coalition forces are trying to crush. It's called reconciliation.

Reporting from Afghanistan, "CBS Evening News" Anchor Katie Couric asked the top commander, U.S. Army Gen. David Petraeus, if the United States would be willing to play a role in that process.

"We're not the ones calling the shots," said Petraeus. "At the end of the day those who will determine whether reconciliation goes forward or not are those who lead the Afghan government, and that is why it is appropriate that they lead these efforts, perhaps facilitated in some cases, supported in some cases, by the United States. But those are going to remain behind the scenes, and that's where they should remain. President (Hamid) Karzai has established the Afghan government's redlines if you will. They must respect the constitution, lay down weapons, cut off ties with al Qaeda and essentially be willing to be productive members of society."

Fighting around the country on Saturday and Sunday killed five Afghan soldiers and at least 17 militants, according to the defense and interior ministries. Five of the insurgents were killed when roadside bombs they were trying to plant exploded, while a joint NATO-Afghan operation in the southern province of Zabul resulted in the death of a senior Taliban commander, Sandar Yar, according to a provincial government statement.

Insurgents in Kandahar province, one of Afghanistan's most violent, killed the head of a private security company on Saturday, while one civilian was killed and five wounded by a land mine in Herat's Anjil district.

President Hamid Karzai has ordered such companies to cease operating in Afghanistan within four months, posing a challenge to the U.S. and its allies who rely heavily on contractors to guard supply convoys, installations and development projects.

Complaints have mounted that the firms are poorly regulated, reckless and effectively operate outside local law, and the order to disband them is part of the president's moves to assert his authority.

German Brigadier Gen. Josef Blotz, spokesman for the International Security Assistance Force overseeing foreign troops in Afghanistan, said ISAF supported Karzai's order and would work with his government on plans to carry it out.

However, Blotz said an interim solution may have to be found that addresses the need for some contractors to continue to operate.

Separate solutions needed to be found to provide protection for diplomats, development projects, and convoys, as well as ensure security around forward operating bases manned by foreign and Afghan troops, Blotz said.

"It is a very complex thing," he said.

Karzai has also ordered the removal of some of the capital's ubiquitous security barriers to free up snarled traffic.

Work crews outside a police recruiting center in eastern Kabul on Sunday attached steel cables to iron hoops embedded in the concrete blast walls and used cranes to move them away slab by giant slab. Some were loaded aboard trucks and removed, while others were simply shifted back from the street closer to the walls of the actual center.