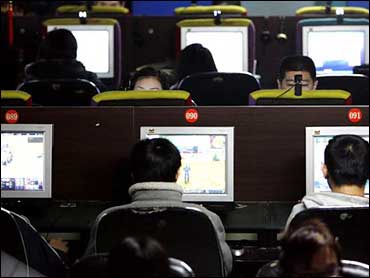 Representatives from Microsoft Corp., Yahoo Inc., Cisco Systems Inc. and Google Inc. defended themselves at a House International Relations subcommittee hearing, but a Google official acknowledged that figuring out China's Internet market "has been a difficult exercise."

But lawmakers were skeptical of what several saw as the companies' efforts to explain their business practices in China only after a recent crush of negative media scrutiny and government attention.

"Your abhorrent actions in China are a disgrace," the Californian said. "I simply don't understand how your corporate leadership sleeps at night."

The companies, in prepared testimony, appealed for guidance on how to work in what they called a challenging marketplace.

Google's Elliot Schrage said "the requirements of doing business in China include self-censorship — something that runs counter to Google's most basic values and commitments as a company."

Still, he said, Google decided to enter China because it thought it "will make a meaningful, though imperfect, contribution to the overall expansion of access to information in China."

Yahoo's Michael Callahan testified that "these issues are larger than any one company, or any one industry."

"We appeal to the U.S. government to do all it can to help us provide beneficial services to Chinese citizens lawfully and in a way consistent with our shared values," he said.

China's "effort to regulate the political and religious content of the Internet is counter to our interest, to international standards and, we argue, to China's own long-term modernization goals," Keith said in prepared testimony.

U.S. tech companies eyeing China face a dilemma, analysts say: while keen to tap a market that could soon eclipse America's, they must also worry about the perception they're helping China harass dissidents.

"They are in an extremely dicey position," said John Palfrey, a Harvard Law School professor who studies the Internet.

The potential for profit is great. China is estimated to have more than 110 million Internet users.

A new survey by the Committee to Protect Journalists calls China's efforts to control its media "unique in the world's history.

"Never have so many lines of communication in the hands of so many people been met with such obsessive resistance from a central authority," the group said.

China says its aims are benign — to protect its citizens, and especially children, from "the immoral and harmful content" of the Internet.

Critics say the limits China imposes go further and are aided by U.S. companies. They point to a new Google search engine that censors some results. Yahoo, they say, helped police identify and convict a journalist who had criticized human rights abuses.

"Cooperation with tyranny should not be embraced for the sake of profits," said Smith, chairman of the House subcommittee on global human rights.

The businesses that have adopted Chinese Internet standards say they must obey local laws. They lack the leverage, they say, to influence world governments.

Cisco, which has been accused of providing technology that allows China to filter Internet content, testified that it sells the same equipment in China that it does elsewhere.

Robert Dietz, who monitors Asia for the Committee to Protect Journalists, said other repressive regimes are watching closely how the U.S. Internet companies act in China. What happens with China's Internet, he said, probably will serve as a model elsewhere.

"We sense that people are standing back, watching the technology evolve, watching the attitude evolve, seeing how far countries can go in pushing their ... Internet censorship," he said. "We don't think this will end in China."