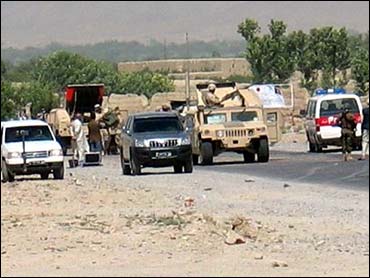 An explosion near a U.S. military vehicle in southern Afghanistan on Monday wounded four American troops, a U.S. military spokesman said, in the latest in a series of bloody assaults on coalition forces.

The vehicle was hit by the blast near the main southern city of Kandahar. A local Afghan police chief said it was a suicide assault. The U.S. military confirmed it was a bombing, but gave no further details.

Spokesman Col. James Yonts told reporters in Kabul that the four wounded, one in a serious condition, were flown to a U.S. base in Kandahar for medical treatment.

"A preventional reconstruction team was traveling outside of Kandahar when an IED exploded," Yonts said. "It is a sad day when coalition forces supporting the Afghan people inside of Kandahar are attacked by someone in this nature."

Gen. Salim Khan, the deputy police chief for Kandahar city, said a suicide bomber had rammed a car full of explosives into the U.S. vehicle. The head of the attacker was found near the site of the blast and it appeared to be that of an Arab, he said.

"The U.S. vehicle was blown up in the suicide attack," Khan said.

He said at least three American troops were killed, but in a statement, the U.S. military said no U.S. service members had died.

An Associated Press reporter at the scene saw three American soldiers being carried on stretchers into a U.S. military helicopter. Two other U.S. helicopters hovered overhead, while dozens of Afghan and U.S. troops took up positions around the site.

Troops blocked the highway where the attack happened. The road links Kandahar and the western city of Herat. Hundreds of Afghans who had been driving along the road looked on.

Three other bombs were found hidden on roadsides around Kandahar on Monday morning, a government official in the city said on condition of anonymity. All were defused, he said.

A bomb attack Sunday on an Afghan family's pickup truck just north of Kandahar killed a woman and wounded four others, including two children, said Khan, the deputy police chief. He said the attackers may have thought the four-wheel-drive vehicle belonged to the Afghan army as it was similar to ones the army uses.

A purported Taliban spokesman, Mullah Latif Hakimi, said in a telephone call to AP that the group was responsible for Monday's bombing and that the suicide attacker was an Afghan.

Hakimi often calls news organizations to claim responsibility for attacks on behalf of the Taliban. His information has sometimes proven untrue or exaggerated, and his exact tie to the group's leadership is unclear.

The bombing follows an upsurge in attacks by Taliban-led rebels in recent weeks, which the government says marks an effort to sabotage legislative elections due in September.

On June 1, a suspected al Qaeda suicide bomber killed 20 people at the funeral of an anti-Taliban cleric in Kandahar, one of the worst terror attacks here since the ouster of the Taliban in 2001.