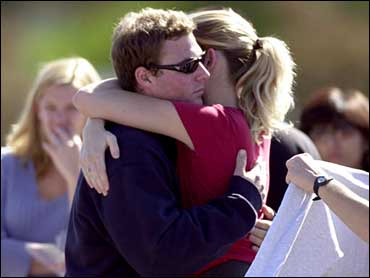 A student flunking out of the University of Arizona nursing school shot three of his professors to death Monday, then killed himself as dozens of terrified students rushed to get away.

Police said Robert Flores Jr., 41, specifically targeted the instructors, killing one in her office on the second floor and shooting the others in a fourth-floor classroom as students dove for cover.

Flores walked to the front of the classroom and shot the first victim several times, then went to the back of the room and killed the second victim, police said.

Senior Julie Raymond said she was taking an exam when the gunman came in.

"We just thought that he was late for the test," Raymond said. "Then he started talking to instructors and fired shots. All of us ducked under the tables and then ran out of the room. At first, I thought it was a joke and realized it wasn't when I heard the shots."

Flores told students in the room to leave. He was later found dead by officers searching the school.

Bomb squad members were called in after a backpack or package was found underneath the gunman's body. The suspect had threatened to blow up the building, though it was unclear when the threat was made, police said. The college and nearby buildings were evacuated.

"It's too soon to say why he committed this terrible deed," Miranda said. "We have determined that there are many issues in Mr. Flores' life, all of which are a factor."

Flores, a Gulf War veteran, worked at the Southern Arizona Veterans Administration Health Care System as a licensed practical nurse, and was studying to become a registered nurse, officials said. It wasn't clear in which branch of the military he served.

Anu Nigam, a 29-year-old graduate student, said she and her husband were outside waiting for a shuttle bus when a woman came out of the building with a cell phone, trying to dial and screaming that there was a man with a gun in the building. Police were at the scene within seconds.

"A group of people were crying and running desperately to get out of the building," Nigam said. "They were crying, tripping over one another, falling down."

Student Lori Schenkel said she had several classes with Flores and he told classmates about a year ago that he had gotten a concealed weapon permit.

"He was just a very aggravated student, a rude, obnoxious type of person," she said. "He came across as very aggressive and mean, and seemed to have a lot of issues with being angry."

Melvin Thornhill's wife, Mabel, was in the classroom taking an exam. "He shot the first teacher three times and actually said a few more words to other teachers to make people dodge or something to that effect. And shot the second teacher three times as well," he told CBS News Correspondent Sandra Hughes.

"He was armed and had extra ammo. She saw the clips that he was carrying and that was why she thought after he killed a few teachers, he was going to shoot some of the students."

But the gunmen let them leave. "She said that he was real calm and he said you don't have to run ... walk," Thornhill said.

Nurse William Gordon, who worked with Flores at the VA hospital and knew him for three years, said he saw nothing that would foreshadow violence. He said Flores dropped out of a nursing ethics class last semester and seemed upset, but it wasn't an unusual reaction.

"I didn't pick up anything majorly confrontational with him regarding the instructor," Gordon said. "Nothing that would alarm you."

Students were grieving the loss of their professors.

Rogers, who taught pediatrics, was a "really great teacher," Ilda Rosano said. "She always has her door open. If you need to see her, you just walk right in."

McGaffic taught classes on health care ethics, critical care and death and dying. She was also a volunteer chaplain at University Medical Center, where she helped comfort seriously ill patients and their families.

Jessica Odom, a 21-year-old student, recalled the one-on-one interactions McGaffic had with students in the death and dying course.

"We had a memorial for all our loved ones that died, and she sat and cried with us all as we talked about our loved ones," Odom said.

University President Peter Likins said there were no immediate plans to change security procedures at the 34,000-student university, which includes the 380-student nursing school.

Flores lived in an apartment complex a few miles from campus where many other students live. Complex manager Joe Brink said Flores had been there for more than a year and was "a model tenant."