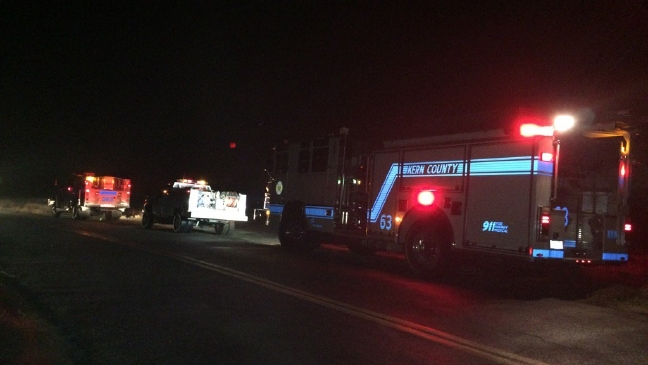 MCFARLAND, Calif. -- A medical helicopter carrying a patient to a hospital crashed amid heavy rain and fog in California's agricultural San Joaquin Valley, killing all four people aboard, officials said.

The SkyLife air ambulance had a pilot, a nurse, a paramedic and a patient aboard when it went down in a remote field about halfway through its planned 50-mile trip Thursday night, American Ambulance president Todd Valeri said at a news conference.

The Bell 407 helicopter was headed from Porterville Municipal Airport south to San Joaquin Community Hospital in Bakersfield when it crashed, Kern County fire officials said. Officials did not say why the patient was being taken to the hospital, and the names of the dead are being withheld until family members can be informed.

There was dense fog and heavy rain in the area and it wasn't clear whether that caused the crash, but "weather conditions are always a factor," Valeri said.

The weather also made it difficult to find and reach the site, and rescue crews didn't get there for more than two hours after the helicopter went missing.

The helicopter went down amid rolling hills of cattle-grazing country east of the town of McFarland, 135 miles northwest of Los Angeles. The wreckage was 2½ miles from the nearest highway. Kern County sheriff's deputies secured a road leading to the site.

The helicopter's cabin was fairly intact but the tail was broken off and lay 30 yards away while debris was scattered over a 50-square-yard area, according to a description by sheriff's spokesman Ray Pruitt.

The crew notified flight dispatch that it was leaving Porterville at 6:52 p.m., according to Dan Lynch, EMS Director for Fresno, Kings, Madera and Tulare counties.

At 7:05 p.m., dispatch tried to raise the helicopter for a routine check in but got no response, Lynch said. After checking with airport towers in Fresno and Bakersfield, the dispatch center notified Kern County authorities that the aircraft was missing and provided its last GPS reading.

A sheriff's helicopter crew reported finding the debris field on private property around 8:35 p.m. Rescuers reached the crash site around 10 p.m. and confirmed the fatalities.

The helicopter was staffed by a "seasoned crew," Lynch said. "They had been a team for quite some time".

Air Ambulance's Skylife Air Medical service operates three helicopters out of the Fresno and Visalia airports. Valeri said that SkyLife has never had an aircraft crash since it partnered with Rogers Helicopters Inc. in 1991. The air ambulance transports about 1,000 patients a year, he said.

Investigators will look at possible factors including human error, mechanical malfunction and obstacles, such as bad weather, power lines or radio towers, said Gary Robb, a helicopter crash attorney based in Kansas City, Missouri. Power lines run through the area but it was not known if they were involved.

"These are things the NTSB will thoroughly investigate and examine," Robb said. "It's a human tragedy that these people lost their lives."

KBAK reported there have been 11 incidents involving Bell 407 helicopters this year, according to online helicopter crash database HeliHub. The aircraft is widely used around the world.

Medical flights have repeatedly drawn safety scrutiny, including a 1988 NTSB study that found need for improvement.

Again, in 2006, the board published a study of 55 accidents involving emergency medical helicopters and airplanes between January 2002 and January 2005, a period in which the number reached levels not seen since the 1980s.

The study urged evaluation of each flight's risk before each mission and formal procedures for dispatch and monitoring of flights, using a dispatcher with specific aviation knowledge and experience to provide the pilot "with consistent and critical weather information, assisting in go/no go decisions, and monitoring the flight's position."

Another recommendation urged use of terrain awareness and warning systems and night-vision imaging systems.

The study also noted that more than half of the accidents occurred when no patient was aboard and the flights could operate under less stringent rules. It urged that all emergency medical service operations be conducted under the stricter requirements.